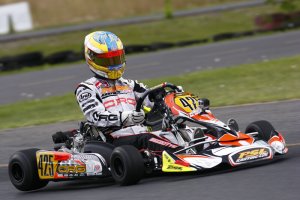 Recently taking the Coupe du Quebec win, Alessandro Bizzotto will look to be back on top of the podium this weekend in Mosport
(Photo: PSLKarting.com)

After a successful start to the first half of the 2013 karting season, Team PSL Karting is set to take on the premier Canadian karting series as they bid for championship titles and Rotax Max Challenge Grand Finals (RMCGF) berths. Heading to Mosport International Karting at the Canadian Tire Motorsport Park in Bowmanville, Ontario this weekend for the first stop of the Eastern Canadian Karting Championship (ECKC) series, eight Team PSL Karting drivers will look to put the PSL/CRG package on top during Round 1 at the 1.5 km, 12-turn Mosport facility.

“The entire team has been looking forward to Round 1 of the ECKC since the snow finally began to melt,” explained Stephan St-Charles Vice-President of PSL Karting. “We have a great program this year, with another talented set of drivers on board.”

With several drivers scoring wins at the opening round of the Coupe du Quebec series, Team PSL Karting drivers look strong heading into Mosport for the first stop of the ECKC. In Rotax DD2 competition, Alessandro Bizzotto is set to continue PSL’s legacy in the ultra-competitive category. Recently scoring the victory in the Quebec Cup opener, Bizzotto will look to continue his winning ways this coming weekend and put PSL/CRG on top of the podium once again. Having placed tenth in the overall points in 2012, the rising talent is certain to up his game for 2013 competition. Francis Méthot is set to tackle the DD2 category as well, and comes off a podium finish from Coupe du Quebec action.

Two PSL drivers will be vying for the DD2 Masters title, including 2006 Rotax Masters World Champion Luc Sauriol. Entering as a competitor to watch in the ultra-competitive field, Sauriol will begin his bid to make a return trip to the RMCGF this weekend. The multi-time Team Canada member definitely has what it takes to make a strong opening statement and will look to improve upon his third place finish in the overall championship points from 2012 in his quest for the 2013 title. Joining Sauriol on the DD2 Masters roster will be Francois Bellemare.

“After some very good results at the most recent Rotax Euro Challenge in Castelletto, which should be a testament in itself, as we were only less than a tenth from winning the ultra competitive Senior Max Final,” added PSL Karting’s Team Manager Andrew Campbell. “No doubt, CRG is leading the grid again, and with a few more months, I imagine the other chassis manufacturers will be playing catch up.”

Another new name will join PSL’s junior drivers, as American Gavin Reichelt will hope others in the Rotax Junior field will need to catch up to him. With experience and speed on his side, Reichelt’s switch to the CRG brand showed promise at the Coupe du Quebec round and although the young star is ineligible for the championship, he will look to garner wins in the competitive class.

Thierry Cote will be back in Rotax Mini Max action with Team PSL Karting. Showing speed to run at the front during the Coupe du Quebec round, Cote will look to shine during his sophomore season in the Mini Max class. Completing the team roster and putting a driver in every ECKC Rotax class will be William Chayer in Micro Max, who will join PSL for 2013.

Drivers will take to the Mosport facility for the double-header event weekend starting Friday, May 31 for practice. Two full race days will follow Saturday and Sunday, as Team PSL Karting members look to set the tone for the 2013 ECKC series.

“Mosport offers an excellent motorsport ambience, even for the most experienced drivers,” St-Charles concluded. “With a circuit design like no other, we are sure to see some great racing from our PSL drivers.”