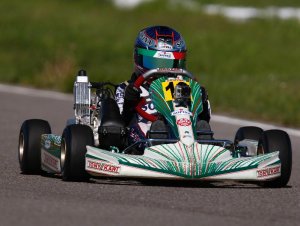 Matthew Latifi looks to be a factor from the opening weekend of ECKC racing action
(Photo: Secrets of Speed Publications)

Matthew Latifi, a member of the Sofina Foods Drivers’ Development Program and the Ferrolati Corse Karting Team put an exclamation mark to the opening three months of his second full year of racing by hitting the podium at the final weekend of the 2013 Florida Winter Tour Rotax Max weekend of racing held at the Ocala Gran Prix. This incredible weekend saw Matthew run inside the top five in every single session including a trip to the podium in the final race of the internationally acclaimed winter series. The young Latifi, looking to follow in older brother Nicholas’ footsteps, completed all six rounds of the Rotax program along with select Formula Kart weekends as he prepared for races back home in Canada.

“Ocala was a fantastic way to finish off the first stage in Matthew’s 2013 program,” comments David Tennyson, coach for Latifi. “Matthew progressed very nicely from his first race at Palm Beach International in January through Homestead and then capped it all off in Ocala. He moved himself up the order and ended with a podium result. Fantastic stuff.”

With a long break between racing action, this weekend marks the opening two rounds of the Eastern Canadian Karting Challenge and Latifi looks poised to be a contender for the title. Running at the ultra quick Mosport International Karting Complex located on the grounds of Canadian Tire Motorsports Park, a solid field of Micro Max cadet racers will look to establish an early lead in the championship. Working with veteran tuner Steven Chapman, the duo have been developing their program and honing their plan. Taking in the recent MIKA club event, Matthew was able to secure poles and podiums in a run up this weekends action.

“It was a strong first quarter and we will look to build on that over the course of the next three months,” continues Tennyson. “Matthew has done a great job developing his skills and race craft. We will look for a strong second part to the season as Matthew takes on some new challenges here at home.”

The Sofina Foods Drivers’ Development Program was created to help Canadian karting series offer young drivers a goal and a prize to work towards. In 2010 and 2011, the Sofina program supported the Eastern Canadian Karting Championship as well as Team Canada drivers going to the Rotax Max Challenge Grand Finals. The Sofina Foods Drivers’ Development Program is proud to support Canadian drivers reaching the international motorsports stage.

For more information about this release, please contact David Tennyson at davidten@h10media.com.