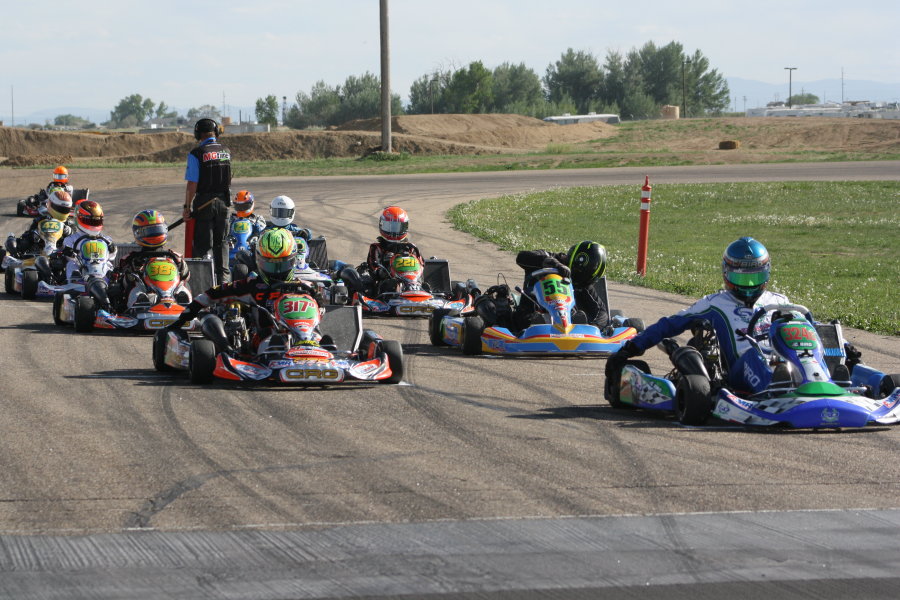 A stacked grid of Stock Moto drivers in the S1 and S2 categories highlighted the third round of the Rocky Mountain ProKart Challenge
(Photo: Brooke Miller)

Superkarts! USA made a return this past weekend to a long time staple of Colorado kart racing. IMI Motorsports Complex in Dacono, Colorado has been the birthplace of the career for many of the region’s – and even some of the nation’s – best competitors in the sport. IMI played host to the Rocky Mountain ProKart Challenge’s third round of racing this past weekend – presented by American Medical Response.

Racers from all sides of Colorado and Wyoming showed up to do battle on the state’s oldest kart track. While the trip back to the ‘front range’ area was a step back in time for some racers, it was a new experience to drivers of a new generation. The track proved to be a tuning challenge to even the most seasoned drivers, as the track showed unusual amounts of tire wear on Friday during organized practice. Several teams and drivers battled chassis setup to ensure maximum grip throughout the racing action on Saturday. One consistent this year has been the growth of the series as director Stan Bryniarski and the series supporters continue to work feverishly at bringing back a strong and stable regional program to the Rocky Mountain area. The atmosphere within the paddock was positive and the action on track was heated as drivers battled in Superkarts! USA classes and United States Rotax Max Challenge categories. 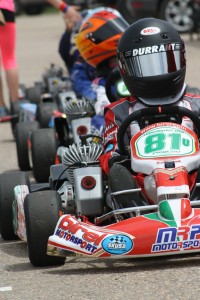 Payton Durrant ruled the day, and has ruled the 2013 RMPKC season with an iron fist thus far. After sweeping both TaG Cadet as well as Micro Max at rounds one and two in Utah earlier in May, Durrant picked up where he left off by recording a perfect day in TaG Cadet. While Durrant checked out on his fellow Mini Rok racers behind him, terrific races for the rest of the top spots raged throughout the heats and into the main event. The second heat race witnessed an incredible back and forth race between Cody Dempster and Liam Letzsch. The duo traded the second spot on the track at least 10 times in the last five laps, with Letzsch coming out on top. The main event saw Durrant check out again, until he looped his kart on the backstretch. Thanks to the large lead he had amassed over the rest of the field, Durrant was able to get the kart back on-track and maintain his lead. Letzsch held off a hard-charging Tristin MacLeod for second after Dempster retired on lap five, while Derek Deslauriers finished in fourth.

TaG Senior and Master were combined on the weekend, with Jason Dempster earning maximum points in the TaG Senior category, spending most of his time up front mixing with TaG Master leader Scott Falcone. Both Dempster and Falcone scored perfect weekends in their respective classes, adding to their individual championship leads. Behind Dempster in TaG Senior was Charlie Craig in second and last year’s regional TaG Senior champion Brandon Southwick in third. Behind Falcone in Master was Richard Hensley and Mike Urban completing the podium. TaG Junior and Rotax Junior shared the track as the third race group of the event. As the only entry in TaG Junior, Angus Watkins swept the day. In Rotax Junior, Grant Copple led Max Fedler the entire day. Copple would score the main event win, after Fedler recorded a DNF due to mechanical issues.

Cole Thompson kicked things off in Mini Max by beating out double duty driver Cody Dempster by two tenths for the pole position. Dempster went to work in the heat race, getting around Thompson with three laps to go to earn the first heat race win. Coming off the win in the first heat, Dempster looked to go back to back with a dominant run in the second heat. As Dempster took the white flag in the second heat race, second place Derek Deslauriers closed the gap and stayed on Dempster’s bumper. As the two drivers headed for the last corner with the checkered flag waving on the other side, Dempster’s kart suddenly lost power and slowed as Deslauriers flew by him for the win. Dempster’s kart came to a stop before it could cross the finish line. In the main event, Dempster wasted no time in getting back to the front. Despite starting at the back of the Mini Max field, Dempster began to move up the running order. When second and third place drivers Austin Ray Chalman and Cole Thompson drove off the track together to end their main event race early, Dempster moved into second place. By lap three, Dempster had taken the lead from pole sitter Deslauriers and led the rest of the way. Deslauriers stayed right on Dempster’s back bumper for the remainder of the 15-lap main event, with Everest Fedler rounding out the podium. 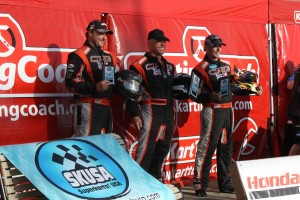 In Micro Max, Filip Niemkiewicz was perfect all day. Utah racer Alexis Apodaca gave Niemkiewicz a real run for his money in the first heat. Apodaca stayed on Niemkiewicz’s bumper the entire race. Niemkiewicz would not let things stay as close the remainder of the day. Apodaca finished nearly five seconds behind Niemkiewicz in the second heat, with Filip driving to over a 20-second advantage in the main event. Apodaca settled for second as Palmer Mahoney completed the Micro Max podium.

The S3 Novice Stock Moto, S4 Master Stock Moto, and the S5 Junior Stock Moto classes ran together on the track at the same time. Jet Davis led the way all day in the S4 category, but lost the main event victory to a penalty. Davis kicked off the day by beating David Conyers out for the pole position by just under a tenth of a second. Davis was perfect in both heat races, as Conyers stalked him in both sessions. The main event was no different, with Davis solidly out front and running away to a six-second advantage over Conyers. The joy was short lived though, as a protest of the start showed Davis jumped the gun. Officials penalized Davis one position for the jump start, moving him from first to second, and handing Conyers the victory. Behind Davis on the podium in third place was Wyoming driver Scott Allen. S5 had only one entry where Evan Roshak swept the day, while S3 saw Leo Ahearn run uncontested.

S1 Pro Stock Moto welcomed SKUSA Pro Tour SpringNats podium finisher Sabré Cook, making her regional debut after having to sit out the first two rounds in Utah due to school commitments. Cook started the day off on a sour note, after failing to complete one lap in qualifying due to motor issues. Cook was forced to start heat one behind the S1/S2 combined group, as she methodically picked off S2 drivers in an attempt to catch up to S1 leader Christian Bird. Cook finished the first heat race in third overall. The second heat saw the trio of Cook, Bird and S2 Semi-Pro leader Ben Schermerhorn pull away from the field and stage their own race. Schermerhorn led the two S1 drivers for three laps before relinquishing the lead to the pair of Pros. Bird beat Cook to the line by just over one-tenth, making in an all S1 front row for the start of the main. Bird led the first half of the first lap, before Cook checked out. She took the lead on the backstretch on the opening lap and then proceeded to stretch away with a five-second victory over Bird. Schermerhorn went on to earn victory in the S2 Semi Pro category. Mianna Wick came back from dead last in the main event to finish runner-up. Wick chased down Ryan Rudolph for third place before the halfway mark and went after the second place machine of Jack Bradley. She would catch and dispose of Bradley with six laps to go, earning her the runner-up place on the podium. Behind Wick, first year Stock Honda racer Lindsay Brewer followed through, working past Bradley with two laps to go to complete the podium, as Bradley and Rudolph finished fourth and fifth. 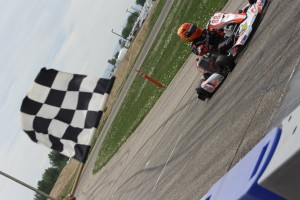 After a great day of racing wrapped up, drivers, teams and families crowded around the Karting Coach paddock area for the podium ceremonies. Series director Stan Bryniarski handed out over $2,000 in prizes thanks to Rocky Mountain PKC sponsors. Falcone Custom Homes helped to give away five sets of tires, while Unser Racing pitched in a wide variety of prizes. HPD handed out a new top end kit for the Stock Moto package, with SDB Promotions offering up a set of tires and free entry to the Grand Junction event, where more great prizes will be handed out at during the awards presentation.

The Rocky Mountain ProKart Challenge takes a break for the month of June, returning on the first weekend in July for a big event scheduled at the Grand Junction Motor Speedway. The western Colorado facility will host rounds four and five on the July 5-7 weekend, which will also serve as the warm-up event for the SKUSA Pro Tour SummerNationals, scheduled for July 19-21 at Grand Junction. Be sure to visit http://www.superkartsusa.com for more information on both events, along with updates on the new Facebook page (www.facebook.com/RockyMountainProkartChallenge).