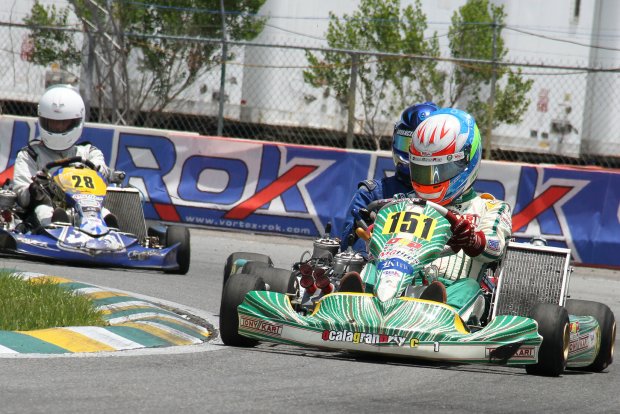 Under beautiful blue skies, Round 2 and the second of back-to-back weekends of Rok Cup USA’s Orlando Region went off with exciting racing this past weekend at Orlando Kart Center. In the second of three rounds for the region, championship battles kick up a notch with all categories exhibiting dramatic efforts for valuable points. Unique to the Rok Cup Program, drivers experienced double pre-finals and double finals on race day, and even though Finals were held on the Monday of the holiday weekend, the efforts and strategies that drivers took on made the event that much more intense.

Rok Shifter
Only offered for the second time this year, Rok Shifter continues to yield some of the best racing, by some top drivers. Americans love a great shifter race, and the Rok Shifter delivered. After Nick Neri and AJ Myers battled throughout Round 1 a week ago, Round 2 brought additional talent to join the fight in the likes of Daniel Formal. The three would run nose to tail throughout the weekend, leaving all to wonder who would be at the checkered when it counted, Monday’s Finals. Behind these first three, and adding to the intensity of the category, the continued pressure from Brian Hassel, Chris Bany and Vicky Brian kept the Rok Shifter pace at its fastest throughout all the Heat Races and Final Phases. In the end, the war was won by Nick Neri, who again came home a Double Final winner, and double MG Tire winner, with Formal coming second in Final 2 and Myers second in Final 1. After two rounds, Neri leads the points slightly over Myers, but the battle is still wide open, to be decided in the third and final round of the region.

Mini Rok
True to form, the close competition of the Mini Rok Category again brought the highest number of entries for the weekend as Mathias Ramirez looked to maintain his top position in the Orlando Region Championship. With the top half of the field running nose to tail for the better part of the weekend, each on-track element was anyone’s to own. Throughout the heat races, Ramirez would fight off Mini Rok regulars Dylan Gennaro and Kollin Stuart and Jake Knepper, setting up a coin toss for the Final Phases. After some tough luck in the Heat Races, Phillip Varner and Ricardo Villasmil threw their names in the hat for top spot battles in the Finals as well. End the end, however, Ramirez maintained his championship lead by taking the win and a set of MG Tires in both finals, with Villasmil third. Varner came home second in Final 1, while Stuart took runner-up honors in Final 2. 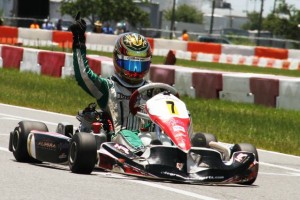 Rok Senior / Rok Master
Like most categories, after Round 1 action a week ago, Round 2 brought more talent to contest Rok Championships. The same held true for Rok Senior. Eddie Rodriguez at the top of the points, got a welcome from Garrett Peterson and Ben Hankinson of Pennsylvania. After Peterson made announced his presence by taking the Pole in Qualifying, the stage was set for Rodriguez to defend his points lead. Throughout the weekend, the two would swap positions at the point, but in the end Rodriguez repeated his double-final wins as he did a week earlier, and enjoying his MG Tires with his trophies. Peterson secured second and Hankinson third. Rok Master saw another double winner, Thomas Hankinson, who dominated the Category throughout the event.

Rok Junior
With no clear leader in the Junior ranks and newcomers to Round 2, the category could have gone to any of the talented Junior drivers. Luis Jose Forteza struck first by posting a pole-grabbing time in Qualifying, slightly ahead of Michael DeQuesada and Matthew Shane, setting the tone for the Heat Races. Throughout the heats, Forteza and DeQuesada traded spots with Shane and Kayla Stuart pressing for the position. The four would push each other all weekend to set up great racing for the Finals. Swapping the top positions throughout the Final Phases, when the checkered flew, it was DeQuesada that would come out on top, enjoying his set of MG Tires for class winners. Shane came home second and Forteza third. Perhaps the closest point battles of the Region, Rok Juniors will take the championship to the very end in Round 3.

With the first two rounds in the books, Rokkers in the Orlando Kart Center Region prepare to finish the Championship July 27-28 where Regional Champions will be crowned and invited to the Rok Cup USA Championship Event later in the year. Next up for the Rok Cup USA program is Round 4 of the FKCS June 14-16 at Monticello Karting, followed by Rok Cup USA Homestead Region Round 2, June 22-23. Both events are available for Online Registration right now at http://www.RokCupUSA.com