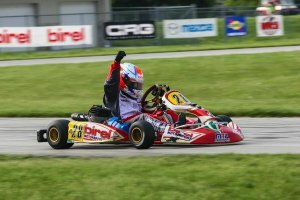 A week after sweeping the Yamaha Junior races at the WKA Great Lakes Sprint Series at New Castle, Grant and the Quinlan Motorsports team returned to Indiana with the primary goal to score a Komet or Yamaha Junior feature win, an accomplishment that had eluded the 2011 WKA Triple Crown champion since he advanced to the 12- to 15-year-old Junior ranks at the beginning of the 2012 season.

Quinlan was fast throughout Friday’s practice session and entered Saturday’s competition as one of the clear favorites in Yamaha and Komet Junior.

Quinlan backed up his fast Friday speeds with the Pole Award in Saturday’s Komet Junior contest. “GQ” finished third to MRP Birel teammates Mike McAndrews and Matt Solarczyk in the eight-lap pre-final before avoiding a multi-kart lap one accident in the 14-lap main event.

The incident eliminated McAndrews and other top competitors from the remainder of the contest, and Quinlan took full advantage by racing out to a 1.6-second win over Tazio Torregiani to capture his first Junior Man Cup victory after a year and a half of trying.

“We’re really happy to finally get the Junior win,” Grant stated Sunday night at New Castle while loading up. “It was a long time coming. We’ve been close before but I thought this weekend was our best shot. It was made a little easier after Mike (McAndrews) and a couple others were in that wreck on the backstretch, but I still think we had the kart to beat. Thanks to MRP, Birel, the Lobaughs, my dad and family for all the help.”

Quinlan nearly swept Saturday’s Junior competition at New Castle. Coming to the checkered in the Yamaha Junior main, Quinlan led the race into the 17th and final corner before contact with another driver led to officials’ determining that Quinlan get docked two positions. Grant crossed the finish line first, but was credited with third place due to the penalty.

“I don’t know if we got one taken away or what,” Grant admitted. “It’s pretty rare you agree with a penalty that takes away a win, but it is what it is. To sweep the day would have been an awesome accomplishment. I felt like I did everything within the rules. We’ll take third place and move on.”

Quinlan returned Sunday to net a fifth-place result in Komet Junior 2 and a sixth in Yamaha Junior 2.

Next up for Grant is the June 28-30 WKA Manufacturers Cup Grand Nationals at South Bend, Indiana’s JET Karting. Remaining WKA Man Cup events are August 16-18 at Pittsburgh and Sept. 27-29 at the new Mooresville Motorplex in Mooresville, N.C.