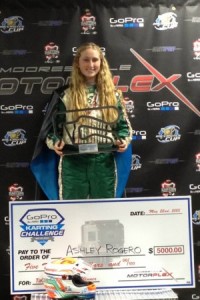 After strong performances at the 2013 Formula Kart Productions Florida Winter Tour (FWT), female pilot Ashley Rogero continued her winning ways through the months of April and May. Competing in regional and national events up and down the eastern half of the United States, the Tony Kart driver is often finding herself on the top step of the podium in the male dominated sport.

After claiming a race win at the North Florida Rotax Max Challenge (NFRMC) event at the beginning of the month, Rogero, an independent driver who travels the country with her father, made the trek north to the New Castle Motorsports Park facility in New Castle, Indiana. Competing at the third round of the World Karting Association (WKA) Manufacturers Cup program, the Ocala Gran Prix (OGP) supported driver would see action in the IAME Only class where she utilized a Parilla Leopard powerplant.

As the driver to beat throughout the weekend, Rogero really began to flex her muscles when the wheel-to-wheel action commenced. The Floridian was the first driver to reach the checkered flag on Saturday but a penalty for an incident in the last corner relegated her back to second. Even more determined to claim the victory on Sunday, Rogero dominated the IAME Only final and added another victory to her already impressive resume.

“I will do anything to try and win,” explained Rogero. “A fellow competitor and I were racing hard in Saturday’s main event and some contact was made. The officials deemed the contact as avoidable and I was penalized one position. I was frustrated with the call and was determined to make up for it on Sunday and did so with the win.”

Leaving Indiana on Sunday evening after the conclusion of the podium, the Rogero family would travel back south to the Mooresville Motorplex facility in Mooresville, North Carolina. Competing in the GoPro Be a HERO Karting Challenge event, Rogero and a host of other competitors would battle for the $5000 check that would be awarded to the victor. With some of the biggest names in NASCAR also in competition, Rogero would be one of the youngest competitors on track and by the end of the Wednesday evening event, made a name for herself amongst some of the biggest stars in motorsports.

Battling wheel-to-wheel with the likes of Denny Hamlin, Scott Speed, Matt Crafton as well as some of today’s top karters, Rogero won the rain shortened main event and collected her 5K check at the evening’s podium celebrations.

Rogero continued, “This is one of the coolest events I have ever competed in. Battling with drivers you see on TV and having legends stop by the pit to congratulate me is an awesome feeling. I can’t wait until one day stand in their shoes and be a champion at the highest level in motorsports.”

With no time off, Rogero will travel back to New Castle, Indiana for round two of the United States Pro Kart Series (USPKS). Once again competing on her Comet Racing Engines powered Tony Kart chassis, Rogero will look to continue her winning streak at the top level of karting in the USA.

Ashley would like to thank all of her sponsors for all their hard work and continued support: the entire crew at Ocala Gran Prix, OTK USA, Tony Kart, Grand Products, Comet Kart Sales and Race Tech Development, as well as all her friends and family.