Leopard Pro and Yamaha Senior to compete for up to $6,700 cash purse at New Castle Motorsports Park on June 7-9

Following its inaugural event in Mooresville, North Carolina, the United States Pro Kart Series – presented by Bridgestone, FranklinKart.com, and L&T Manufacturing – is ready to host its second event of the 2013 season. The new series will travel to the New Castle Motorsports Park on June 7-9 for stop number two, sponsored by DRT Racing and Ribtect3. The event will continue to feature the $3,100 cash purse for the Leopard Pro category for the weekend, and will now include a $2,100 purse for the Yamaha Senior class on Sunday.

The New Castle Motorsports Park/Comet Kart Sales Yamaha Pro Challenge will take place Sunday of the June 7-9 weekend within the Yamaha Senior category. Racers will compete for a $600 first place prize, with second through fifth earning $500 to $200 in cash along with another $100 going to the fast lap of the main event for a total of $2,100.

The Leopard Pro division will continue racing for another $3,100 on the weekend, with $1,550 in cash handed out after both finals. Austin Wayne Self and Mike Giessen each took home a check for $750 for their first place prize. The $500 bonus for the same driver to win both main events on the weekend from Mooresville has grown to $1,000 by the series, with HYTORC offering an additional $500 bonus to the driver to win both days. In total, up to $6,700 in cash could be handed out during the USPKS New Castle event. 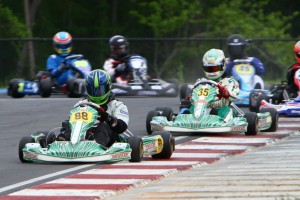 A number of drivers have positioned themselves in the title chase for the inaugural United States Pro Kart Series season, with the New Castle events to shape up the contenders even more.  The Leopard Pro division saw two drivers earn inaugural wins, both in the rain. Self was the top driver in Saturday’s main event while veteran Giessen showed the way on Sunday. The two are locked up at the top of the point standings with Saturday runner-up Mason Chelootz trailing by 35 points. Dustin Stross and Austin McCusker split the wins in Leopard Semi-Pro. Stross was the ‘rainmaster’ on Saturday while McCusker came through with the victory on Sunday. Both ran runner-up to each other while Mike McAndrews was third both days and trails by 65 points in the standings. Chuck Gafrarar left the inaugural USPKS event leading the Leopard Masters. Gafrarar swept Saturday’s action but ran third on Sunday. Brian McHattie earned victory in round two, and trails by 15 points in the standings. Brian McEvoy was runner-up Sunday and third Saturday to sit 25 points behind Gafrarar while Chuck Tate and Tim Shutt remain within 85 points.

Joel Jens was dominant in the Yamaha Senior division, sweeping the weekend and securing an 85-point lead over Sam Cate in the championship. Anthony Gangi Jr. fought strong in his Yamaha Junior debut, placing runner-up both days of competition. His consolation prize is leading the championship, holding a 10-point advantage over Saturday winner Zach Holden with Sunday winner Gresham Wagner another 60 points behind. Yamaha Cadet was a great battle all weekend at the Mooresville Motorplex with Neil Verhagen and Austin Schaff each earning a main event victory. They are tied for the championship lead following the first two rounds with Sam Mayer and Alex Verhagen both within 35 points of the top two. Mark Fineis leads the standings in the Yamaha Rookie point standings. The Sunday main event winner leads Nic Sheppard – the Saturday round winner – by 45 points.

Friday evening, June 7, McLaughlin Motorsports will be hosting a cookout following the practice on track in New Castle. During that time, a 3-on-3 basketball tournament will be held at the NCMP facility, right on pit lane. The event is open to all ages and is presented by eKartingNews.com. When racing action begins Saturday, June 8, EKN will be providing its ‘Trackside Live’ once again through qualifying to the final checkered flag, allowing those unable to attend New Castle in person to feel like they are along the fence line. Friends, family and fans can listen in at http://www.ekartingnews.com/live on the weekend to view live timing and live race call from USPKS announcer Randy Kugler. Those companies interested in supporting this weekend’s broadcast may contact EKN via email sales@ekartingnews.com .

The pre-entry form for the United States Pro Kart Series at New Castle Motorsports Park can be found at the following link (http://www.uspks.com/files/formNCMP.pdf) and must be turned into the series no later than May 31. Pit reservations are to be submitted to the New Castle staff by calling 765-987-8090. Hotel information for the NCMP facility along with more information about the second stop of the USPKS program can be found at http://www.uspks.com . Be sure to ‘Like’ them at Facebook.com/UnitedStatesProKartSeriesUspks