The Texas ProKart Challenge regional series – presented by 3G Kart Racing/Burger King®/Fernelius Alvarez Attorneys/Dallas Karting Complex is set to host its second event of the 2013 season. Teams and competitors of the Superkarts! USA and United States Rotax Max Challenge programs will travel to Katy, Texas to take on the Gulf Coast Kartway, a 7/10-mile course located just outside the metropolitan Houston area. The tight and challenging course is designed to test both drivers and equipment as the championship hunt reaches the next step toward the roughly $25,000 in prizes set to be awarded on the season.

The Superkarts! USA categories were filled with a number of returning drivers from last year’s season and many of those who are contenders at the Pro Tour level already. Miguel Lopez nearly swept the entire weekend in the Pole Position/DR Kart S2 Semi-Pro Stock Moto division. Missing out on the fast lap in qualifying on Sunday in Dallas was his only blemish, securing a solid championship lead after the opening weekend over Ryan Kinnear and Cody Freeman. Jordon Musser did score a perfect weekend as he showed the way in the SwedeTech S4 Master Stock Moto category. Milton Rivera was runner-up both days, and leads the challengers looking to knock off Musser in Katy. Patricio O’Ward is the current point leader in the J&T Racing S5 Junior Stock Moto division, but commitments to formula car racing this summer will have him missing the rest of the season. This moves Sunday Dallas winner Nathan Adds as the top driver in the standings, with Raul Guzman and Derek Scott Jr. trailing. Bernardo Quintanilla was the lone competitor in the Blacken Insurance Group S3 Novice Stock Moto class at the opening weekend, but is expected to welcome more competitors in the upcoming rounds. 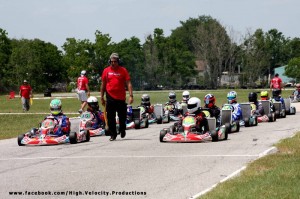 Nicholas Brueckner doubled up in the win category for the TaG Cadet category and leads a competitive field in the championship chase. Emiliano Richard and Max Hewitt are the top challengers thus far. Austin Osborne was near perfect in the Champion Racing/Intrepid TaG Junior class, and holds a solid lead over Rodrigo Rejon after the first weekend. Wyatt Maness and Brian LaBarbera split the wins in TaG Senior, but Maness holds the top spot in the standings. Two drivers also split the wins in TaG Master, with Patrick Roth and Paul Jones taking the victories and are separated by 10 points.

The Burger King Rotax Max Challenge program within the series continues to grow, welcoming a number of top Rotax drivers from the area. Max Waithman and Emiliano Richards split the wins in Micro Max, with Waithman holding the upper hand in the points. The Enertech/Chase Racing Mini Max division is among the most competitive of the series. Parker Chase and Nicholas Brueckner scored the wins on the opening weekend, but both trail Luis Alfonso Perez Pena in the standings. In the Champion Racing/Intrepid Rotax Junior category, Jesse Woodyard and Nathan Adds are the top two drivers after the Dallas event, each earning a victory and Woodyard holding a 35 point advantage. Fifteen points just separate the top two in Rotax Senior as Chaz Nagel and Logan Bearden have established themselves as the drivers. David Pergande is the point leader in Rotax Masters following a win in round one, with the win going to Dean Boyd on Sunday. Alex Tartaglia and Nathan Mauel split the victories in DD2 while Lance Lehrman leads the standings in Dallas Karting Complex DD2 Masters over Mike Wherley and round one winner Daniel Lubin.

Online registration prior to the event will remain open until midnight, May 26. Currently, the price to enter the two rounds – including a driver pass, five gallons of fuel and one liter of oil – is available for $285. Fees will increase for at-track registration. Racer as asked to ensure they fill out their Superkarts! USA or US Rotax Max Challenge membership forms if their membership has not yet been renewed for the 2013 season. Premium pit spaces will be available on the weekend, and competitors are asked to contact the series immediately with exact space dimensions needed, by faxing 832-932-1451 or email pitspot@texasprokartchallenge.com . Space is limited and the Gulf Coast Kartway would like to remind competitors that no RV or passenger vehicles will be allowed in the pits. Move-in will begin Thursday morning and will be completed by the end of the day.

To enter for the opening rounds of the 2013 Texas ProKart Challenge, or to find out more about the program and event details for the Gulf Coast Kartway weekend, be sure to visit http://www.texasprokartchallenge.com and ‘Like’ them at Facebook.com/texaspkc