Return to Willow Springs for California ProKart Challenge for Round Four

The California ProKart Challenge has reached the halfway mark of the 2013 season, with round four of the six event series set for the Willow Springs International Raceway karting circuit. While this will be the second visit for the Superkarts! USA regional series this year to the Rosamond, California facility, the May 31-June 1 event will be contested on the 6/10-mile in the reverse direction (clockwise).

“We are running the track backwards this time for a few different reasons,” added SKUSA CEO and California ProKart Challenge promoter Tom Kutscher. “First of all, it runs well in this direction. We’ve done it twice before, the last time being in 2008. Second of all, it mixes it up for our competitors who are running the whole series, as we already ran it counter clockwise in March. Lastly, it minimizes any ‘hometown’ advantage and helps even the playing field, which makes for an even more exciting championship battle. If anyone is concerned about the safety aspects, rest assured that SKUSA is doing everything possible to make it a safe AND fast event weekend, starting with the Friday practice day and carrying over to Saturday’s race day. We are bringing in extra Techpros and water barriers, and will be making other on-site adjustments to ease track entry, exit and race starts. Anyone that wants to make it out to practice in the reverse direction prior to our California PKC Friday practice day should call the track office to confirm when they are allowing practice in this direction.”

With the track running in the reverse direction, the fourth round of the 2013 California ProKart Challenge should shake up the championship chases. Billy Musgrave has gone three for three in the Extreme Karting/Vemme S1 Pro Stock Moto category this season, vaulting him up the ranks in the eKartingNews.com Driver Rankings and out front in the PKC championship chase. Last year’s title winner Jimmy McNeil has not called it quits just yet with two runner-up finishes, and is sure to challenge the younger rival. Young gun Jake Craig is coming off two straight wins in the Pure Karting TaG Senior division and has a solid lead in the championship. Missouri driver Mason Daughters is the lead challenger with three top-four finishes minus a win. 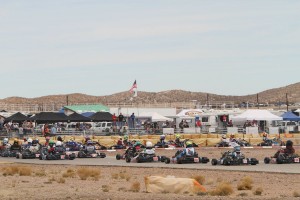 The California ProKart Challenge returns to the Willow Springs facility next weekend, taking on the course in the reverse direction from the March event
(Photo: dromophotos.com)

Texan Connor Wagner has two sweeps in the last two rounds to secure the point lead in the Buddy Rice Karting S2 Semi-Pro Stock Moto class standings. Round one winner Robert Marks trails Wagner, needing a second win to jump him back closer in the title chase. The Leading Edge Motorsports S4 Master Stock Moto championship is a battle of consistency with Brad Dhesi and Darrell Tunnell at the top of the standings. Dhesi has the better results thus far and leads Tunnell by 51 points. Billy Cleavelin has been perfect the last two rounds in the Mike Manning Karting TaG Master class, and with three wins this year has a firm grasp on the championship. Kevin Manning and Ethan Wilson have a great battle for second going to the end, unless they can dethrone Cleavelin in the final three rounds. Rick McAllister ended the win streak of Luke Bianco in the Leading Edge Motorsports S4 Magnum Stock Moto category at Adams, but Bianco continues to lead the standings over Ken Manning and McAllister. Gianfranco Casadei has two straight wins and the gap is now just five points between he and round one winner Will Vogel in the 2 Wild Karting S3 Novice Stock Moto standings.

Jarred Campbell and Brendan Baker are atop the standings in the SwedeTech Racing Engines S5 Junior Stock Moto and the Phil Giebler Racing TaG Junior classes. Campbell is three for three in main events, edging out defending champ Carter Williams in all three. Baker has two wins to his credit, and leads the double-duty driver Williams by a large amount at the halfway mark. Three different drivers have won on the season in the Sunshine Daydream Creations TaG Cadet class in 2013. Ryan Schartau won round two, and leads the championship chase over recent winner Trenton Sparks, while Buttonwillow main event winner Jonathan Shone is close behind in third.

With the series at the halfway mark, the California PKC staff would like to remind racers about the Streets of Lancaster GP Driver Scholarship. One lucky driver competing in the SKUSA regional series will be rewarded with a support program for the 2014 season, totaling over $11,000 as part of the $70,000 prize purse for the series in 2013. The award will be handed to one driver in either TaG Junior, TaG Senior, S5 Junior, S2 Semi-Pro or S1 Pro division who excels on and off the track, determined by a panel of judges. Officials from the Streets of Lancaster Grand Prix will be on site for the Willow event to promote the Driver Scholarship program and to answer any questions racers may have regarding the September 28-29 race, which also serves as the California ProKart Challenge series finale.

Pre-entry for Round 4 of the California ProKart Challenge is available now at http://www.skusastore.com until midnight on Wednesday, May 29. Racers will hit the track Friday, May 31 as the California PKC will host a full day of practice. No reserved pit spots will be provided on the weekend, with move-in scheduled to start Thursday afternoon. Gates hours and hotel accommodations are listed at the SKUSA event page. See all event details at the following link (http://www.superkartsusa.com/regional/california-pkc/event-calendar/round-4-2013.html). Racers are reminded to hang out for the podium ceremonies once again, as Kutscher and the SKUSA operation is planning another ample raffle prize drawing for those in attendance.

Superkarts! USA would like the thank the following companies, in addition to the support of the class sponsors, for their aid toward the 2013 season: MG Tires, Mothers Polish, Honda/HPD, VP Racing Fuels, Motul, MIR, and AiM. Stayed tuned to http://www.superkartsusa.com for any late breaking news on the event, as well as updates on Twitter at @SuperKartsUSA and at Facebook.com/SKUSA.