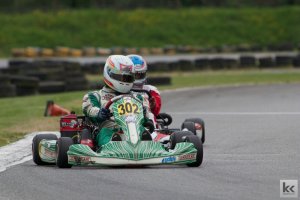 “It was a great weekend for Black Racing Engines powered drivers,” explained Blake Choquer, who partners with Chris Black in the company. “We have worked hard to get ahead and be on top and will continue to work hard to stay there.”

The Rotax CanAm ProKart Challenge would start strong for Black Racing Engines, as drivers would find the podium in the first official day of wheel-to-wheel competition. Scoring podium results in five of a possible six Rotax divisions, BRE would show their speed by running at the pointy end of the field.

Stepanova Nekeel would be the man to beat in the headline Rotax Senior division as he turned his pole position into a main event victory by the time the final checkered flag would fly. BRE powered Derek Wang would pull double duty on the weekend competing in both Rotax Senior and DD2 Masters. Finding the podium twice on Saturday, Wang would join Nekeel on the Senior podium as he would come home in the third position. Not to be out done by his BRE powered counterpart, Wang would score the pole position and race win in the Rotax DD2 Masters category.

Rotax Mini Max driver Sting Ray Robb and Rotax Micro Max competitor Jordan Navota would also provide BRE with victories on Saturday as they both found the top step of the podium. Adding the pole position for both classes earlier in the day, Robb and Navota would dominate their respective divisions.

BRE would provide potent power for Coltin McCaughan in the Rotax Junior division, as he would find the podium on Saturday afternoon. Competing against a field of talented drivers, McCaughan would claim the third position and start his quest for a championship off on the right foot.

Back to the track on Sunday for round two of the series, Robb and Wang would start where they left off Saturday. With Wang garnering the pole position in Rotax DD2 Masters and Robb doing the same in Rotax Mini Max, both drivers would go on to double-up on the weekend, taking the main event victories. Courtesy of doing the double, both drivers leave event one as the point leaders in their respective divisions.

Jacob Blue Hudson would make it two BRE powered drivers on Sunday’s Rotax Mini Max podium as he improved on Saturday’s result to finish on the podium.

Rotax Junior front-runner McCaughan added a podium result to BRE’s resume by crossing the stripe in the second position. Improving on Saturday’s third place result, McCaughan will look to continue his upward trend at round three and take the checkers.

Choquer added, “Trackside support is so important at National events like this and the ‘BRE Trackside Support Program’ really allowed our clients to let us worry about engine tuning and carburetion allowing them to focus on chassis setup and techniques. We worked with each driver to help determine the best gearing and engine setup to get the maximum performance out of their engines.”

Black Racing Engines and the BRE Trackside Support Program will continue to support and service customers throughout the 2013 season. With plans to attend the remaining rounds of the Rotax CanAm ProKart Challenge, United States Rotax Grand Nationals, Canadian Karting Championships and the Western Canadian Championships, BRE will be on site to support customers. With engine rental programs available for all events, interested customers are asked to contact Black Racing Engines.

For more information on Black Racing Engines or to book one of their national level engines for testing or event weekend use, please visit them online athttp://www.BlackRacingEngines.com or contact company officials at 604.783.6474 or 604.562.5849 or via e-mail at BlackEngines@iCloud.com