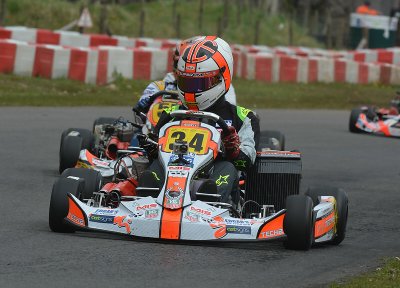 The British Championship with the ABkC National TKM Championships started later than usual this year, but any expectation of good weather was dashed on Saturday when all track activities had to stop for two hours due to the heavy rain. Sunday was better, once the early drizzle had cleared up and everyone got onto slicks for the finals.

KZ1 MSA British Kart Championship
The premier class for the British title has moved to the gearbox, or shifter 125cc class as the original KF2 failed to attract enough entries. Henry Easthope, the CIK-FIA U18 World Champion, stunned the 125cc regulars by dominating the new class, with fastest time in qualifying, over KZ2 champion Matt Dittman and Daniel Borton. Easthope had only sat in the kart for the first time two weeks earlier. He and Borton shared the heat wins on the very wet Saturday. Easthope had slid off the track in a heat and only started fourth for the first final. He reeled in the hefty gap to poleman Daniel Borton to relieve him of the lead mid-race. Super One Max 177 champion Lucas Orrock has changed disciplines and came fourth behind Dittman. In the second final Easthope enjoyed a lights to flag victory, with Borton a distant second whilst James Mudd stormed up to third after suffering a fie place penalty in the first final which had dropped him from fourth to ninth. 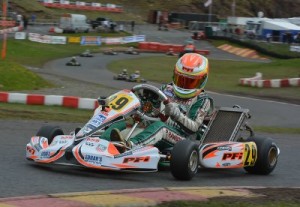 MSA British Junior Kart Championship KF Junior
The Sahara Force India supported Jehan Daruvala topped qualifying over the newcomer to the series, the Thai driver Sasakom Chaimongkol. The latter came off in the first heat and although he came second to Daruvala in the second, he started grid 8 and never really recovered. He whilst Daruvala won the first final from pole. The rest strung out behind Daniel Ticktum and Philip Rawson. In the second final Daruvala was pushed into a spin at the start, but stormed back to finish fourth. Chaimongkol was excluded from that final for driving standards. All that had left Rawson out on his own until his engine lost all its coolant. He just survived for the win, Ticktum dropping to third on the last lap in favour of Harrison Newey, son of the Red Bull Racing F1 designer, after Ticktum had tried for a pass for the win. 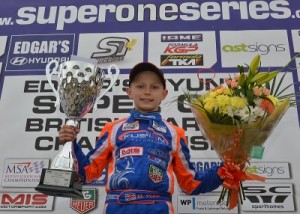 MSA British Cadet Kart Championship for IAME Cadet
Oliver York set down his marker for the British title amongst the forty hopefuls, taking both final wins. William Pettit and Oliver York had topped their respective qualifying sessions, Pettit just getting the verdict overall. Alex Quinn and York took the heat wins, York both of his. In the first final, Teddy Wilson slotted into second as they all fought round the first few corners but he succumbed to Lewis Thompson and fell back to an eventual seventh. Thompson got alongside York over the line, the official gap was 0.01s. Kiern Jewiss stormed up to third after poor heats, over Matthew Graham and Jonny Edgar. In the second final Edgar relieved York of the lead on the first lap, but York found a gap in his defences mid-race. William Pettitt and Alex Quinn stormed through from their start positions of tenth and fourteenth respectively to finish third and fourth, the top four all closing up at the end. 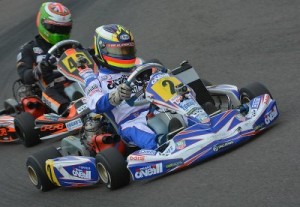 Formula KGP National Championship
Mark Litchfield and Bobby Game shared the wins but only after a penalty had been applied. Luca Hirst had topped the qualifying over Game and Danny Keirle on the very wet Saturday, whilst Litchfield had a fuelling problem and didn’t set a representative time. He soon stormed through the second heat to sixth after another problem in the first. The heats were won by Game and Joe Porter, so Hirst and Game shared the front row and soon a five way battle commenced with Litchfield slicing through to the front over Hirst and Game after Keirle dropped out with an electrical problem. Porter had slotted into second but gradually slipped down the order. In the second final, Hirst fell out of the lead battle with a spin at the second hairpin leaving Game and Litchfield duelling hard for the win. A tiny mistake by Game was capitalised on by Litchfield with a chop into Pits corner, then Game took a wide line to run out of hairpin 2 side by side, Litchfield just getting the verdict only to receive a 5 place penalty for contact, so leaving Game the winner over Phil Smith. Keirle had stormed up from the back to fifth, just behind Ryan Green. 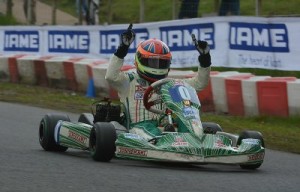 Junior TKM ABkC National Championship
Matt Davies dominated the junior economy class in both wet and dry conditions, and took home a full points tally. Daniel Baybutt had been nearest in the wet qualifying, then Jake Campbell-Mills and Jak Watson were the heat runner-ups. Campbell-Mills retired after the start of the second heat so only started the first final on grid 11 whilst Baybutt shared the front row. Baybutt managed to get into second at the start, but was usurped by Alex Forward, and later by Alex McRoberts whilst Campbell-Mills only reached seventh. In the second final Davies nearly doubled his early winning gap to 8s, this time Letts waiting until mid-race to regain third from McRoberts then vault over Forward to take second. 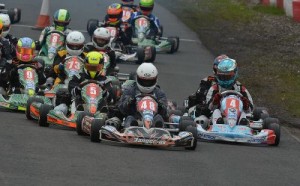 TKM Extreme ABkC National Championship
Although Will van Es topped the timed qualifying sheets over Charlie Bruce-White, he didn’t fare so well in the heats, with only a third and fourth, as Bruce-White claimed both wins. Luke Graver from grid 3 took advantage of both at the start of the first final, but was soon relieved of the lead by Bruce-White. He and Van Es traded the lead a few times until Van Es settled into first, challenged to within 0.01s over the finish line. Graver had fallen away by some 6s, holding off Andrew Lawrence and a train of karts at the finish. Joe Forsdyke was not scored at all as his transponder was missing and he only reached eighth from the back in the second final. Van Es enjoyed a lights to flag victory in the second final with Graver and Bruce-White swapping second at the end for exactly the same top five as in the first one. This year points are awarded in the heats, and this has enabled Bruce-White to take the championship lead by a point over finals winner Van Es.