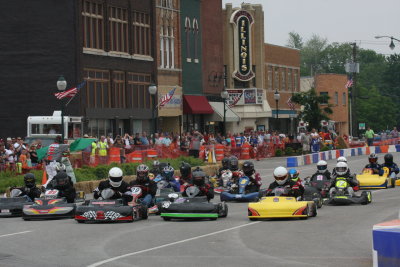 The inaugural Jacksonville Plaza Grand Prix, presented by Good Times Docs, exceeded everyone’s expectations and was well received by Jacksonville Illinois Mayor Andy Ezard, city officials and local area residents. The event went off with no major problems and approximately 5000 spectators came out to watch what they hope will become an annual event. The race was co-sanctioned by the Mid-State Kart Club (MSKC) and the Mid America Track Challenge (MATC) series. The Sunday May 19 event was held in Jacksonville Illinois in conjunction with Jacksonville’s May 18 Downtown Celebration, a festive day of music, food and fun in the heart of Jacksonville’s downtown. The ½ mile street circuit, set up with direction from experienced race director Rick Fulks, proved to be a fun, challenging and high speed layout. Over 330 plastic safety barriers were brought to the event from Mid-State Raceway along with 400 straw bales which were used for safety barriers. The Rock Island Grand Prix also provided 33 safety pillows. 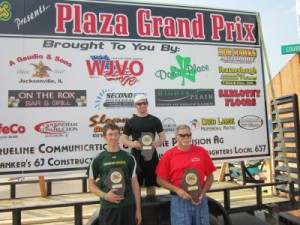 The event kicked off with a presentation of colors by the Mid-State Maraders roller derby team who roller skated the course while presenting the US flag. Racing followed next with nine classes from the MATC series. The final three events were for money races for the Pro classes. At the completion of the races, a podium celebration was held where the top three in each class received plaques shaped like the state of Illinois. Veteran street racer Todd Bolton commented that he liked this “old school” format of street racing where you unload, pea-pick for your starting position, hold two quick rounds of practice and then race one long feature. He was home by six pm and posting his comments on Facebook. Jeff Scott took home the most money in the pro classes after Tim Mayer failed post-tech inspections, picking up $270. for his win in the Clone Senior Pro race. Plans are already in the works for the 2014 Jacksonville Plaza Grand Prix. 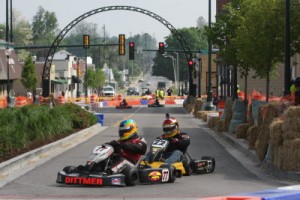 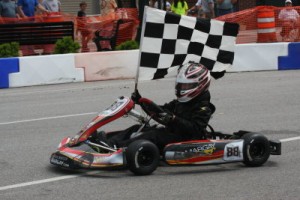