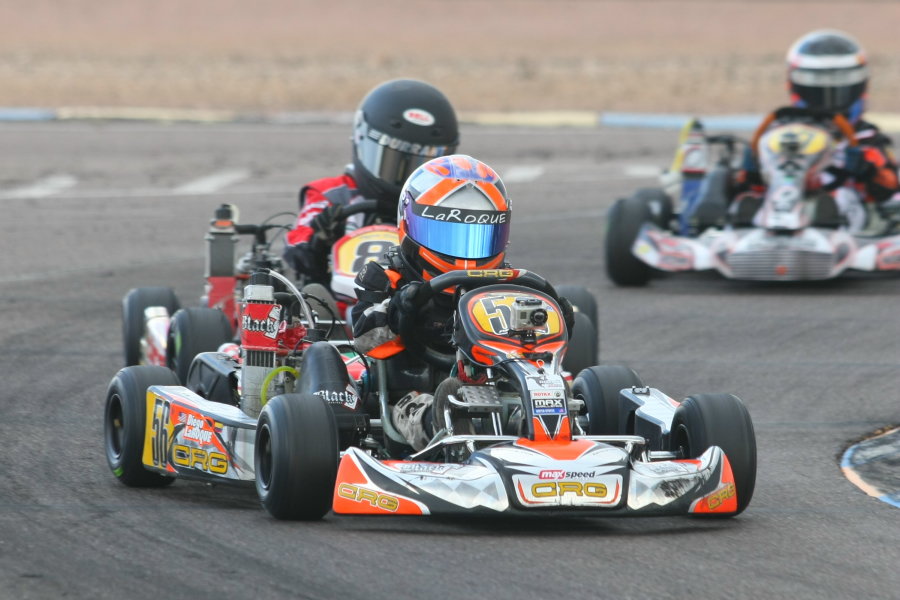 LaRoque is among the title contenders at the Bondurant RMC with a first and second place finish in April
(Photo: Sean Buur - Go Racing Magazine)

It seems racers continue to find ways to begin racing at an early age. For karting, the eighth birthday always was the magic number for kids to enter the sport. Introduce Kid Karts, and young aspiring drivers can begin earlier. Diego LaRoque is among those entering the sport at a young age, just turning seven two months ago. Not only will we see more of him, because of his young age, but he is quickly finding success within the United States Rotax Max Challenge Micro Max division. LaRoque is a member of the Bondurant Rotax Max Challenge program at the PKRA facility in Phoenix, Arizona. Diego is among the contenders to earn the first ticket to the Micro & Mini Max Invitational, set to run alongside the Rotax Grand Finals this November at the NOLA Motorsports Park. LaRoque’s first and second place finishes in April helped him earn the honor of being named GoRotax.com Driver of the Month, presented by eKartingNews.com.

The opening event of April was round five of the Spring series at the Bondurant RMC. Diego qualified second to Liam Letzsch, putting in a lap time of 51.801 to be off the pole position by just over a tenth. Diego jumped into the lead when the green flag waved for the heat race, and led the first nine laps until Letzsch tried to pass for the lead. Racing contact was made and LaRoque got the worst of it and was forced to retire early. The DNF placed LaRoque toward the back of the grid for the main event, but he was determined to fight his way back to the front. Diego drove up to the second spot in just three laps and took over the lead on lap eight. From there, LaRoque drove to the victory, his first of the series.

Round six took place just two weeks later at the PKRA facility with LaRoque gaining more points toward the championship chase. Diego began the day third after the qualifying session. After battling for the lead early on, he settled for the second position to start the main event from the front row. Lined up beside Letzsch, the two battled the entire 14-lap event with LaRoque coming just inches short of the victory and earning the runner-up position.

Diego placed third in the most recent Bondurant event on May 11, moving himself closer to the top of the championship chase with one final race remaining on June 1. LaRoque’s schedule for 2013 include finishing up the Bondurant series at PKRA, along with competing at the Rotax Can-Am ProKart Challenge, the Pan American Championships and hopefully the Micro & Mini Max Invitational in November. 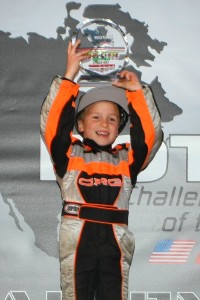 Chassis: CRG and now a Birel
Engine Service Center: BBR Karting, Black Racing Engines
Sponsors: Family
United States Rotax Max Challenge Home Series: Bondurant at PKRA in Phoenix
Years Karting: 1.5
How did you get started in karting? After spending a weekend riding dirt bikes with PJ Jones and his boys Jace and Jagger, PJ said you have to get Diego into karting, so we did.
What has been the high point in your racing career? Winning the third round of the Rotax Challenge of the Americas
What are your goals in racing? To win, have fun, win a ticket to the Rotax Grand Finals
In a few words, how would you describe your driving style? Diego (I drive fast). Dad (he’s very instinctual, aggressive but smart, and tends to show no fear)
2012 Accomplishments: Placed third in Utah Karting Championship in the Micro Max class as a 6 year old (only place that would let him race because of his age)

What do you do when not at the track? Play legos, do homework, and read captain underpants.
What are your goals outside of karting? Want to be the spelling bee champ
What type of street car would you like to drive? Honda Hybrid
What are your pet peeves or things that irritate you? Tags in my shirt
What is your favorite aspect about racing in the Rotax Max Challenge program? Diego (That I can go fast) Dad (it’s a very well run organization with a good set of rules, with great engines)