Nekeel, Wimsett, Wang and Selliken among the big winners at Greg Moore Raceway in Chilliwack, BC 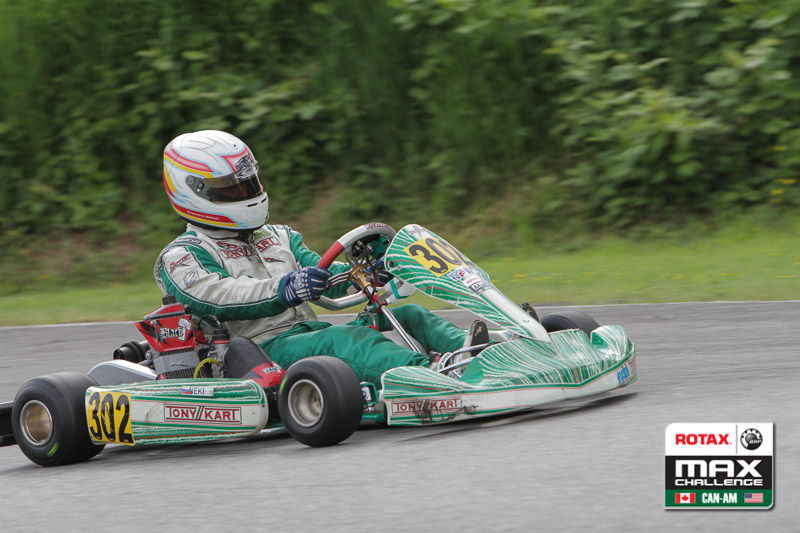 The inaugural Rotax Can-Am ProKart Challenge took place at the Greg Moore Raceway in Chilliwack, British Columbia this past weekend. A combination of Rotax Max Challenge and Superkarts! USA categories, this ‘super regional’ welcomed a large contingent north of the border at the historic circuit east of the greater Vancouver area. The three day event set the stage for the four weekend championship series, awarding tickets to the Rotax Grand Finals held this year in the United States for the first time and guaranteed grid positions at the SKUSA SuperNationals XVII in Las Vegas.

The largest class of the weekend was the HoleShot Drive Systems Rotax Senior division with 21 karts entered. 2011 United States Rotax Grand Nationals champ Stepanova Nekeel began the weekend earning the series first pole position, laying down a 51.920-second lap, a full two tenths quicker than Derek Wang. He continued at the front in the 14-lap Prefinal, holding off former Team Canada member Chris Glover by inches at the line. With the pole position, Nekeel was able to slip away as they fought for the second position. After 20 laps, Nekeel held a three-second advantage to claim victory, but missed out on the fast lap bonus as that went to Andrew Zimmer. The fight for second went to Glover, as he fought off Wang for the position. Kyle Byers was fourth with Emily Maddison in fifth. Day two began with Zimmer at the top of the time sheets as he edged out Nekeel by 87 thousandths for the top time in qualifying. Nekeel got the jump at the start of the Prefinal to lead all laps for the win. Zimmer dropped to third as Glover moved into second with Jake Craig in fourth. Nekeel continued leading into the main event, but was chased down by Craig. They began exchanging the lead numerous times, all the way up to the checkered flag. At the line, Craig held the position and scored the victory as Nekeel had to settle for second. Glover reached the podium a second time, placing third over Zimmer with Byers in fifth. 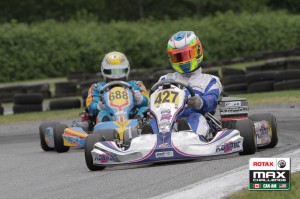 Luke Selliken dominated the action in the CRG West Rotax Junior division, which welcomed a total of 16 drivers. After earning the pole position in qualifying, Selliken was shuffled back to ninth in the order with Florida driver Antoni Ptak taking over the lead. Selliken was quick on the charge, moving up the order lap after lap, regaining the lead on the seventh circuit. From there, he took the win over Ptak with Coltin McCaughan third. The top two fought for the lead early on in the 20-lap main event until Luke secured the position at Ptak came under attack from McCaughan. From there, Selliken drove away to score a two-second victory as Ptak edged out McCaughan – who claimed fast lap honors – for the runner-up spot. Jake Preston was fourth with Jordan Redlin in fifth. The same group of drivers began Sunday’s action at the top of the order with Selliken earning the pole position in qualifying over McCaughan and Ptak. Unlike Saturday, Selliken led green to checker in the Prefinal, outrunning McCaughan and Redlin and matched it in the 20-lap Final. Luke went wire-to-wire, posting the fast laps of the race, to earn his second victory of the weekend and secure the championship lead. McCaughan held second with Redlin rounding out the podium. Ptak was fourth with Preston earning another top-five finish.

Joey Wimsett ran uncontested in the Maximum Velocity Performance DD2 category, earning maximum points toward the Rotax Grand Finals ticket for this year’s championship driver. The Rolison Performance Group DD2 Masters was filled with a number of champions, controlled by Derek Wang throughout the weekend. Wang swept the weekend as he was at the front after qualifying, Prefinal, and Final both days. Texan Brent Harper ran second on Saturday with Falcone in third, as the two swap spots on Sunday behind Wang. Saturday was a dual in the Rotax Masters category between Mike Daniel and Dean Clarke. Daniel was at the front in qualifying and the Prefinal, with Clarke on his bumper. In the 20-lap Final, Clarke went to the front and showed the way to the checkered flag. Official however penalized Clarke four positions following technical inspection. This moved Daniel to the top of the podium over Corey Mitchell with Dayna Ward completing the podium. Daniel continued at the front on Sunday, showing the way the entire day to sweep the action. A five-second advantage with fast lap in the 20-lap Final gave Daniel the full 120 points on the day, along with his second victory of the weekend. Ward was runner-up with Mitchell placing third. 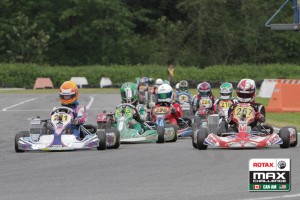 Luke Selliken was at the front of the Rotax Junior field both days
(Photo: Ken Johnson – studio52.us)

Joey Wimsett was a winner three times on the weekend, running uncontested in the S1 Pro Stock Moto class. Dalton Egger won in S2 Semi-Pro Stock Moto over Russell Francis, while Brandon Brock was the winner in S4 Master Stock Moto after David Whitelaw led most of the day. Sara Brinkac was the lone competitor in the S5 Junior Stock Moto division, with all classes expecting to see larger attendance at the second stop of the series.

Sting Ray Robb was the driver to beat all weekend in the Wicked Fabrication Mini Max division. Robb swept the opening day to earn maximum points, leading qualifying, the Prefinal and Final. He took a six-second advantage in the 15-lap main event, outrunning Trenton Sparks and Hunter Melahn. Mathew Morgan and Jacob Blue Hudson rounded out the top-five. Sunday was much of the same, as the 11-driver field once again chased Robb. At the end of the day, it was a five-second gap established by Robb as he once again scored maximum points toward the championship. Sparks was runner-up once again as Hudson stood third on the podium, finishing ahead of Mason Morgan and Conner Wick.

Jordan Novota and Jonathan Portz split the victories on the weekend in the Neilton Racing Concepts Micro Max category, which welcomed 11 young drivers. Novota was the top qualifier on Saturday, a near four tenths of a second clear of the field. He continued the torrid pace in the Prefinal, driving to a nine-second advantage after 11 laps. Marco Kacic was able to match the speed of Novota in the 15-lap Final, making it a great battle for the victory. After exchanging the lead a number of times, it came down to the final lap with Novota edging out Kacic by just 0.070 seconds at the line. Max Wright recorded the fast lap of the race and completed the podium while Diego LaRoque and Austin Portalski rounded out the top-five. Qualifying was close on Sunday with Kacic laying down the fast lap, just 13 thousandths quicker than LaRoque as Wright was just eight hundredths off his time as well. Kacic and Wright fought it out for the Prefinal win, with Kacic crossing the line 0.027 seconds ahead with Portz advancing up to third from fifth on the grid. Portz replaced Wright at the front as he and Kacic battled to the checkered flag. Kacic set the pace for the first 14 laps of the race before Portz made his move on the final circuit. At the line, Portz claimed victory by 63 thousandths over Kacic. Josh Pierson finished third as LaRoque and Novota were fourth and fifth.

The second stop of the Rotax Can-Am ProKart Challenge will take the teams to the first of three events in the United States. The Pat’s Acres Racing Complex is another unique and historic venue for the sport, and will welcome the series on the June 14-16 weekend. More details regarding the 2013 Rotax Can-Am ProKart Challenge can be found at http://www.rotaxcanamprokartchallenge.com