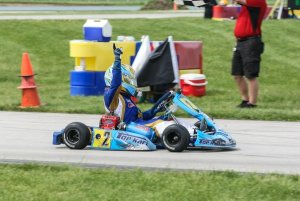 Holden celebrates across the line as he wins his first Cadet race of the weekend
(Photo: NCRM)

Zach Holden raced his No. 2 Top Kart to his first WKA Manufacturers Cup wins of the season this past weekend at New Castle Motorsports Park, where the McLaughlin Motorsports Nationals marked round three of the 2013 national WKA series.

Holden captured his first win Saturday in Cadet Sportsman, which saw him best a competitive 19-kart field with a last-turn, last-lap pass on Brandon Lemke and David Malukas.

The win was not only Holden’s first of 2013 but his first national triumph since switching from Arrow to the Top Kart USA team.

Holden entered the season as Top Kart USA’s No. 1 Junior Sportsman driver, and he immediately showed consistency and championship-caliber driving at the season’s opening rounds at Daytona and Kershaw, S.C.

The team knew it was only a matter of time until Holden broke through with a win, and what better place to do it than New Castle, the track from which Holden’s Greenfield, Indiana, home is only about 20 miles.

“We’ve won a lot of races at New Castle over the last few years but I think the win on Saturday in Cadet was one of the biggest of my karting career,” Holden said. “We expect to run well at New Castle since we have so many laps here. I knew we’d be good, but the competition level is so high in WKA. Brandon (Lemke) was so good all weekend, and it just seems to come down to the last lap and the last turn in about every race. Sometimes you get out ahead and sometimes you don’t. Luckily, we were able to get a couple of them at the line this weekend.”

Holden wasn’t done with Saturday’s win. He came back to capture Sunday’s Cadet main event in another last-lap, last-turn pass. This time Holden used the high line off turn 17 to motor past Malukas and Lemke. He beat Lemke to the stripe by about a half kart-length.

“Sunday’s win was awesome!” an excited Holden said Sunday night. “It came down to the last corner again. I just stayed on the high side and Brandon left the lane open. Thankfully the finish line was far enough down the front stretch that I had the momentum to beat Brandon to the line.”

Holden added to his wins with third-place finishes in both Yamaha Sportsman main events and a fifth-place run in Saturday’s Komet Sportsman final. The weekend was easily Holden’s best of the year and it has him back in contention for a potential second WKA national championship. He won his first last year in Yamaha Sportsman 1.

“It was a good points weekend. We’ll just keep working hard and see where we’re at going into the last race at Mooresville. I want to thank everyone at Top Kart USA for the opportunity this year, Comet Kart Sales and of course my dad for all his hard work,” Zach added.

Next up for Holden is the USKPS round two June 7-9 at New Castle before heading north to South Bend, Indiana’s JET Karting facility, where the Route 66 Sprint Series runs June 15-16, Great Lakes Sprint Series June 21-23 and the fourth round of the WKA Man Cup Series June 28-30.