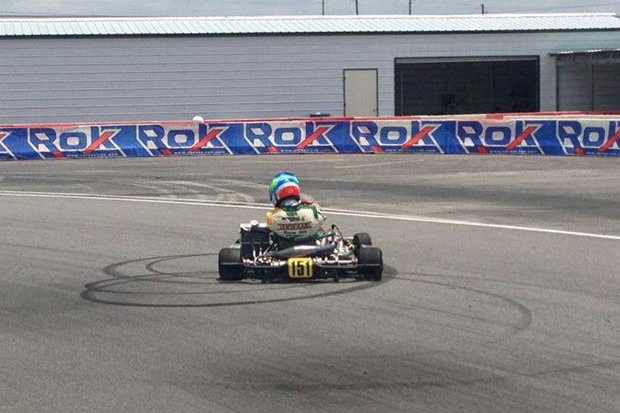 Rok Cup USA launched its newest Region this past weekend with the first of three events scheduled at Orlando Kart Center. Reeling in from its success in the FKCS earlier in the month, and its Homestead Karting Region last month, Rok Cup USA Officials kept the action rolling in Orlando, Central Florida. As with other Rok Cup Regions, Rokkers from around the Region enjoyed maximum track-time, MG Tires for winners, free motor-rentals, and entry packages that make up the best value in karting.

New to the Rok Cup USA Regional programs was an accelerated Race Format where Rokkers raced three Heat Races on day one, followed by double pre-finals and double finals on day two. The new format was widely approved as the schedule allowed for early departures from facility on the second day. A nice addition to those traveling home.

Rok Shifter
Perhaps the most exciting addition to the Rok Cup USA line-up this week in Orlando was the launch of the Rok Shifter Category, where noted hot-shoes, such as Nick Neri and AJ Myers put on amazing displays of Shifter-Kart racing Americans have known to love. Throughout all three heat races on day one, Neri and Myers put on a great show, swapping the top spot, with Neri taking the points. Jim Machul and Vicki Brian shared third throughout the Heats. The first of two Finals saw Neri and Myers again taking the battle head-on with Neri coming out on top, Myers second, and Machul third. Final 2 saw Myers taking the point early on, where he would hold the position for most of the Final. Neri again battling for the lead, coming out victorious at the checkered, relegating Myers to second. Aruban driver Brian Hassel found speed in Final 2 to come home third.

Mini Rok
A usual fan-favorite with close racing action, Mini Rok pilots impressed throughout the weekend. Dominating the top spot in the Heat Races, Mathias Ramirez fired the first shot at victory. Another Mini regular, Kollin Stuart took the second spot. Phillip Varner and Dylan Gennaro shared 3rd. Ramirez picked up Final 1 where he left off in the heat races, at the front of the field walking away with a 9-second win ahead of Stuart and Jonathan Rucker. Shaking up the action, Final 2 brought on an entirely different story as Ramirez broke a chain in the second pre-final, and another Mini Rok front-runner Ricardo Villasmil received a technical violation, spreading the talent about the field for the Final 2 Start. Gennaro took the point at the green, dominating Final 2 for the first ¾ of the race, with Varner running a close second. Ramirez, starting back in the pack worked his way up, past Varner, to challenge Gennaro in the closing laps. The three put on talent lessons for the crowd, in the final two laps. At the checkered, Ramirez edged out Gennaro for the win by only a tenth, with Varner coming home a close third, half a second back. 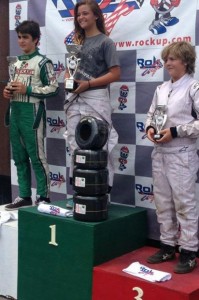 Junior Rok
Right from the start, Michael DeQuesada set the mark in the Junior Rok ranks by taking the Qualifying top spot and dominating all three heat races. Behind him, regular Junior Rokkers Ryan Norberg, Sasha Brun-Wibaux and Matthew Shane battled for the second and third spots throughout the heat races, honing their set-ups for the Finals to come. In the first Final, Norberg found the speed to get by DeQuesada to take the win, with Matthew Shane squeezing by Kyla Stuart for the third spot. In the second of two Finals, Norberg took an early lead and starting to walk away with a sure win, with DeQuesada a solid second. At Lap 4, however, Norberg suffered a mechanical, retiring from Final while leading. Behind him, a classic four-way battle formed between DeQuesada, Brun-Wibaux, Shane and Colin Schmitt. The intense battle took the four drivers to put on a show for the latter half of Final 2. In the end, Brun-Wibaux took the checkered first, over DeQuesada and Schmitt.

Senior Rok / Master Rok
Running on the docket together, Senior and Master enjoyed their own racing action throughout the weekend. Although he had many challenges from Puerto Rican Angel Vallellanas, Eddie Rodriguez dominated the weekend taking both Finals in the Senior Category, fighting for the position the entire weekend. In Master Rok, Vallellanas’ team-mate Gonsalo Aparte took the wins in both Finals, with regular Master Rokker Francois Brun-Wibaux taking second and local Thomas Hankinson third.

With the first of three rounds of the Orlando Kart Center Region in the books, Rokkers look to the second round, (and the second in Back-to-Back weekends), the very next weekend, the Sunday and Monday of Memorial Weekend, May 26 & 27. Online entries are open at and available at http://www.RokCupUSA.com