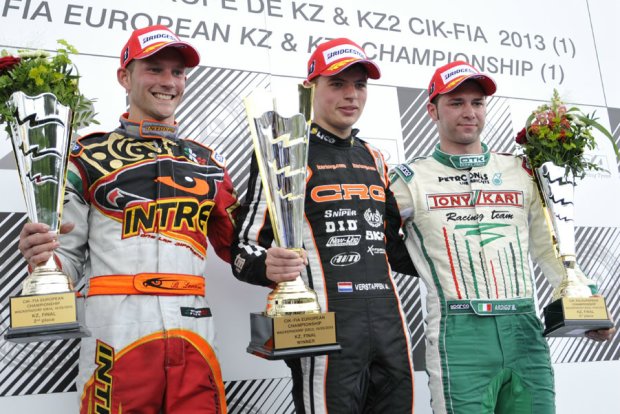 The European CIK-FIA KZ and KZ2 Championship concluded in Wackersdorf (D) its first round with the victories of Max Verstappen (CRG-TM) in KZ and Riccardo Negro (DR-TM) in KZ2.

THE WINNERS OF THE FIRST ROUND
In the presence of the President of CIK-FIA, Shaik Abdulla bin Isa Al Khalif, and of the Vice President, Mr. Kees van de Grint, the CIK-FIA European Karting Championship KZ and KZ2 gave its first verdicts on the Bavarian circuit in Wackersdorf (D). Great expectations for the winners of the two categories that are now heading to Genk, in Belgium, for the last round of the championship at the weekend of 30th June. The two international categories, equipped with six-speed gearbox, had several drivers who could aim at victory today. There were the Prefinal and the Final on schedule, and the results recorded today were rather different from those we had yesterday, especially in the KZ2 Prefinal. Eventually, results had a further, unexpected change in the Finals. The vitality of the championship was immediately evident and the Prokart Raceland circuit of Wackersdorf passes the baton to the Horensbergdam Circuit of Genk with great expectations for thrilling and eventful races.

VERSTAPPEN ON TOP IN KZ
At first sight, Max Verstappen’s weekend (CRG-TM) may seem rather easy: he won both the heats, the Prefinal and the Final. Actually, the CRG driver had to fight hard and against tough rivals. In the Prefinal he had to face his fellow countryman Jorrit Pex (CRG-TM) and the Italian Marco Ardigò (Tony Kart-Vortex) before getting the lead of the race. In the Final, after a bad start, he grabbed immediately the top positions and, at lap three, he got the lead after overtaking another fellow countryman: the pertinacious Bas Lammers (Intrepid-TM). The latter tried to keep up with Verstappen for a few laps, but he was eventually obliged to be content with the second place. Excellent recovery for Marco Ardigò: he started from the sixth slot on the grid and managed to arrive third, after even trying to snatch second position from Lammers. 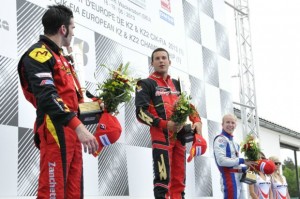 RICCARDO NEGRO PUTS HIS SEAL ON HIS FIRST VICTORY IN KZ2
He comes from Corsano, near Lecce – a town in southeastern Italy – but he races with a German licence: he is Riccardo Negro (DR-TM) and to get onto the highest step of the podium in Wackersdorf had to work hard on his kart. He finished the Prefinal 2 in third position, behind the Swedish Joel Johansson (Energy-TM) and the Italian Felice Tiene (CRG-Maxter). The spring-like day, with temperatures up to 25 celsius degrees, made necessary some more adjustments on the karts and, given the results of the Final, Negro seems to have hit the target. He started from the third row in the decisive race and managed to get an early lead, passing first Johansson, then the Swedish Douglas Lundberg (Maranello-TM), the winner of Prefinal 1. Marco Zanchetta (Maranello-TM), the other favorite, pursued Negro closely but never managed to try to pass the leader. Johansson placed third and he is definitely ready to take part in the race for the championship.

WACKERSDORF RACES ON RAI SPORT 2.
On Tuesday 21st May the pre-recorded broadcasting on Rai Sport at 18.55. Finally, on Friday 24th May and always on Rai Sport, the recap of the whole event in Germany. In both cases, images will be available also on http://www.rai.tv