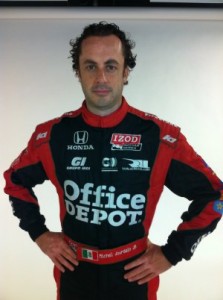 Michel Jourdain Jr. is no stranger to racing. He has raced Indy Car, NASCAR Nationwide Series, Camping World Truck and various rally and sport car series. At the age of 19 years, 6 months and 12 days old, Michel became the youngest driver to start a Champ Car race. He has 152 starts in CART and Champ Car, 3 Indy Racing League starts (1996 INDY 500 Finished 13th & Las Vegas 2nd), and winning Montreal and Milwaukee in 2003 with Team Rahal.

Jourdain, No. 17, will be racing for Rahal Letterman Lanigan Racing with Office Depot Mexico as his primary sponsor and Grupo Indi and Grupo Multi as associate sponsors. Michel’s safety equipment will be supplied by K1 RaceGear.

“K1 RaceGear was very excited to be given the opportunity to supply Michel with the custom gear needed to compete in the Indy 500,” said Thomas Walden from K1. “We wish him nothing but the best of luck!”

Find out more at http://www.k1racegear.com