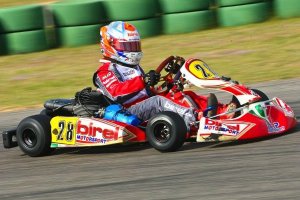 Grant Quinlan will help lead many of the best 2-cycle junior sprint karters in North America to Indiana’s New Castle Motorsports Park this weekend, where the World Karting Association Manufacturers Cup Series will hold its third of six 2013 national events.

Quinlan will ride his familiar No. 28 MRP Motorsport Birel in the Komet and Yamaha Junior classes at New Castle. He’ll be looking for his first WKA Man Cup feature win since advancing to the 12- to 15-year-old Junior classes at the beginning of the 2012 season.

The 2011 WKA Triple Crown champion got off to a good start this past weekend at New Castle, where he attended the season opener for the WKA Great Lakes Sprint Series. Quinlan, who rarely races divisional karting events since beginning his U.S. Legends Car career last year, won both Yamaha Junior main events at the Great Lakes show.

Quinlan’s success at the Great Lakes event has him one of the favorites for this weekend’s Man Cup action. The 14-year-old racer will have four opportunities to win his first national Junior main event between Yamaha and Komet Junior.

“We had a good weekend at the Great Lakes race, and I’m confident heading into the Manufacturers Cup race,” said Quinlan, who has won 14 WKA Man Cup finals, all in the Junior Sportsman ranks. “We should have a good shot (at a win). There’s always a lot of tough competition, but I think we’re as good as anyone. So far this year we’ve been really consistent; now we just need to break into the winners circle.”

Quinlan has been the mark of consistency in the opening two rounds of the 2013 Man Cup. In eight finals between Daytona and Kershaw, he’s finished outside the top 10 only once, a DNF in Komet Junior 1 at Daytona. In the other seven races, Quinlan has recorded finishes of second (twice), fourth (twice), fifth, sixth and ninth.

The consistent finishes have Quinlan in position to challenge for a potential fourth WKA national championship. He’s currently fourth in Yamaha Junior points and fifth in Komet Junior.

“We’re not thinking too much about points right now, but it’d be great to get another WKA championship,” Quinlan said. “Championships are hard to come by, and I think this time around it might mean a lot more because at times the last couple years, it’s been a really tough go. There’s just so much competition in the Junior classes in WKA. But we keep improving and now we’re back to being one of the top contenders.”

Quinlan will participate in official practice Friday at New Castle before racing two classes each day on Saturday and Sunday. After New Castle, he’ll return to focus on his U.S. Legends Car season with events scheduled in Michigan and Atlanta Motor Speedway’s Thursday Thunder Series.