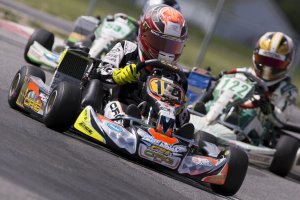 Parker Chase put PSL Karting on top of the podium in the Mini Max class during the opening round of the Texas ProKart Challenge
(Photo: Colby Novak – High Velocity Productions)

Taking on a new series in 2013, karting powerhouse Team PSL Karting would make their presence known in the Lone Star State. Recently competing at the opening rounds of the Texas ProKart Challenge at the Dallas Karting Complex (DKC) in Caddo Mills, Texas, a trio of drivers would put the PSL/CRG package on top in three different classes. Totaling three victories and three additional podium finishes, Team PSL Karting would leave Texas with a bevy of impressive results.

“This series is a real mix of drivers and chassis, and overall the CRGs were consistently in the top-three in all classes entered, including non-PSL branded karts,” explained Andrew Campbell, PSL Karting USA Team Manager.

In the youngest Rotax Micro Max division, Mexican pilot Emiliano Richards showed lots of potential at the DKC event. Overcoming a disqualification in qualifying, the rising talent moved through the pack in the first heat to claim the second place and earn fast lap honours. Another DQ in heat two was quickly diminished when Richards would come charging to take over the lead on lap eight of the final. Leading the remaining laps, Richards was again the fastest kart on track en route to his nearly three second victory. The young gun would add a second place podium finish to his weekend on Sunday, after leading the majority of the race before falling back a position in the closing laps.

New PSL recruit parker Chase would be back in action with the team, taking on the competitive Rotax Mini Max class. In his quest for a Rotax Max Challenge Grand Finals Mini Max invitation, the Texas resident would look to be on his game at the opening two rounds. Working with Campbell as coach and tuner, Chase would clock fifth quick in Saturday’s qualifying and post solid results of second and fourth in the two heats. Making a smart pass on the final circuit of the day’s main event, Chase moved from third to the lead and claimed the victory at the checkered flag. Sunday saw Chase improve from sixth in qualifying to fourth in the one heat race, as heat two was eliminated in all classes. Showing the speed of his PSL/CRG in the final, Chase was able to add a third place podium finish to his weekend accomplishments.

“Parker, being only his second year in a nationally ranked series, was quite impressive,” added Campbell, driver coach and tuner for Chase. “The young pilot is easy to coach, and takes to instructions like a veteran racer. With more experience, he could be a big threat for his competitors.”

Rotax DD2 pilot Nathan Mauel added to Team PSL Karting’s results in Texas. Having just received his DD2 chassis from PSL a few days prior to the event, and running a box-stock engine, the multi-time Team USA pilot posted seconds across the board on Saturday, earning a podium finish and taking fast lap honours in heat two. On Sunday, Mauel moved from third in qualifying to second in the heat, and was able to score the day’s win in the DD2 class by 3.836 seconds.

“PSL has been looking to make a real presence in the state of Texas,” Campbell concluded. “Participating in the SKUSA/RMC Texas ProKart Challenge seemed like a natural decision.”

The Texas ProKart Challenge will resume May 31-June 2 at the Gulf Coast Kartway in Katy, Texas. Team PSL Karting will also be on track in Canada the same weekend for the season opener of the Eastern Canadian Karting Championship at Mosport International Karting in Bowmanville, Ontario.