Today is the newest release of the 2013 eKartingNews.com Driver Rankings, beginning with the Stock Moto category. Following a month of racing, the driver’s totals have been tabulated through the May 6 date, including all events over the past 365 days. The Stock Moto category continues to grow with solid fields at the SKUSA Pro Tour opener – the SpringNationals in Tucson, Arizona. The SKUSA regional programs in Texas and the Rocky Mountains opened up its season with good numbers, and the Florida Karting Championship Series continues to introduce new drivers to the Stock Moto category. This updated standings show over 200 drivers competing in an EKN Driver Rankings event over the past 12 months, the most seen in the history of the program.

Still leading the way is 2010 and 2012 SKUSA Pro Tour champion Fritz Leesmann (CRG). The NorCal native matched his results from last year’s SpringNationals, improving his score thanks to the larger and more competitive field that was in Tucson. He swapped the top position with Oregon’s Joey Wimsett (CRG). The CRG-USA driver kicked off the year with the round one victory, just as he did a year ago, and then finished second to Leesmann in Sunday’s action.

The wildcard of that weekend was Sabré Cook. The 2012 S2 Pro Tour champion was stellar in her S1 debut, mixing it up with the top two. Her two podium finishes moved the CRG-USA pilot up to fifth in the EKN Driver Rankings, sitting behind new number three Tyler Bennett (Tony Kart) and top S1 rookie thus far Billy Musgrave (Tony Kart). Bennett was a podium finisher at the SummerNationals last year, and has been top-10 at the SuperNationals and this year’s SpringNationals under the MSquared Karting operation. Musgrave is perfect thus far in California ProKart Challenge competition with a fourth place finish as his best result at the Pro Tour SpringNationals.

Jumping up to sixth is Alec Gumpfer from Hawaii. Another S2 graduate has been solid early on in his rookie campaign. Just recently, the Tony Kart driver for Pure Karting earned his first California ProKart Challenge podium with a runner-up finish at Adams. Moving up one position in the standings is the 2012 California PKC champion Jimmy McNeil (CRG). A solid campaign in Tucson and three straight podiums in Cali have him looking good in 2013, and put three CRG-USA drivers inside the top-10. The top S2 driver this month is veteran Ryan Kinnear (Intrepid). A title contender in 2012, he’s back for more in ’13 as a double podium finisher in Tucson, running back with Champion Racing/Intrepid USA. Down to ninth is Nicky Freytag (FA Kart) who is taking the season off, as of right now. Completing the top-10, reaching it for the first time is Cody Diede (CRG). The NorCal driver was a winner at the SummerNationals last year, and is carrying the SKUSA #3 plate in S2 this season. 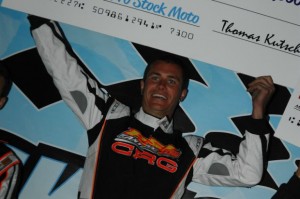 The 2013 season has started out much like last year did, Leesmann leading the SKUSA Pro Tour S1 standings after the SpringNationals. The two-time SKUSA Pro Tour champion faired much better in his first title defense outing, compared to his 2011 run in Tucson. Leesmann was runner-up and win weekend in Tucson, and the PSL/CRG/Diede Racing driver holds a 40 point lead heading to the SummerNationals. The trip to Grand Junction will be his first, but the NorCal native is no stranger to new circuits. 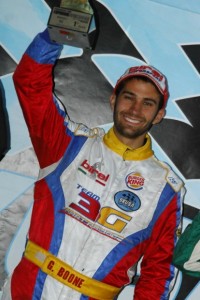 The S2 Semi-Pro category has provided great training ground for young drivers, making the transition to the Stock Moto category. The class can also be for those returning to the sport after some time off. Boone fits that category as he was a young driver looking to make a name for himself in ICC competition in the late 2000s. Now, the 23-year old has begun his comeback to karting strong, leading the SKUSA Pro Tour S2 championship chase after the SpringNationals. The 3G Kart Racing driver was runner-up on Saturday and recorded the victory on Sunday to put himself on top of the point standings. Those results promoted him up to 16th from the 34th spot last month.