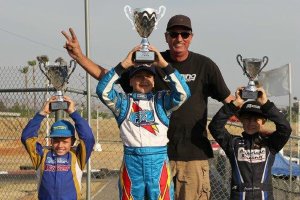 A fixture on the national karting scene across the United States, Fleming Racing Engines powered competitors can usually be seen at the front of the pack. Dominating the Sportsman ranks across the nation in both World Karting Association (WKA) and International Kart Federation (IKF) events, Fleming Racing Engines was the power to have at this past weekend’s SuperKarts! USA (SKUSA) ProKart Challenge California event at Adams Motorsports Park. Taking the top four positions and twelve of the top fifteen spots, results were plentiful for the California based engine builder.

“I have been working on the Vortex Mini Roks for three years now and have spent tons of time on the track and dyno figuring out how to make the most horsepower possible all while staying within the rules,” expressed Fleming Racing Engines Owner Doug Fleming. “I had a hunch that this class would be similar to the Cadet and Yamaha Sportsman ranks that we have dominated for years and it fits right into my niche market.”

This past weekend would see Fleming Racing Engines powered driver Trenton Sparks top the blocks followed closely by Ryan Shartau, Jaggar Jones and Jonathon Schone, all powered by the same engine builder. With 23 competitors in the field, Fleming would flex his muscles in this division taking twelve of the top fifteen positions as well as fast lap honors in the main event courtesy of Schone.

Fleming added, “The interesting fact about this past weekend’s event is that a Fleming Racing Engines powered competitor has won the first three rounds of the ProKart Challenge California region with three different drivers.”