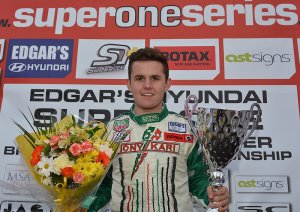 Domination held sway in senior Max, Mini Max and Honda Cadet with the weather leaving something to be desired, wet for much of the finals day and cold for the second round of the Rotax – Honda – Comer series. Exactly the same number raced as at the first round – 171 drivers for Britain’s ABkC national championships. But the driving standards in some classes were not always good, with much loading into the first corner and the Clerks were busy giving out penalties. 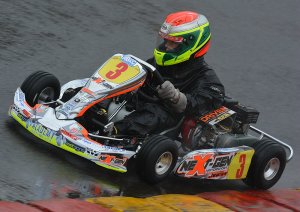 Kiern Jewiss is on a great winning streak at the moment, and although timed qualifying didn’t go quite to plan, by Heat 3 he was on top of things. He did enough for the first final pole, with Charlie Lamb alongside, Morgan Porter and Rory Hudson behind. Jewiss duly took the lead, with Porter leapfrogging Lamb on the first lap until Hudson stormed by both. The wet track was helping Myles Apps up from his row 4 start to find more speed, and soon into second. Matthew Hayden reached fourth but spun back in the tricky conditions and Jewiss just held off Apps with Hudson close behind. Lamb successfully defended fourth from Matthew Hopcraft and Morgan Porter. A get well message goes out to Shaun Proudlock who broke his leg scrambling down to attend his son’s crash. Jewiss was quick to relieve Apps of the lead in the second final, going on to pull a 6s lead on a drying track with everyone still using wet weather tyres. Hudson pipped Apps down the hill but they both fell back as Porter and Hayden came through, the latter prevailing for second. Lamb just nicked third from Porter on the line, with Mark Kimber overhauling Apps for fifth. 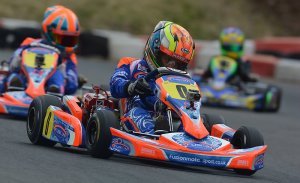 Second in timed qualifying to Tom Wood, Alex Quinn was the more consistent to earn the first final pole position from Wood, Oliver York and Jonny Edgar and they set off much in that order but Tom Wood crashed down to the back. Edgar, who only lives a short distance from the track and scored his first big championship title the weekend before taking the O Plate title, soon burst through to lead over Quinn. Lewis Thompson was making good progress, relieving Quinn for second whilst Matty Easton did the same to York. Wood came back to ninth. The top drivers mostly chose slicks for the second final, but nothing could help first final winner Edgar when his engine stopped on the formation lap. York and Quinn traded the lead as Matthew Graham fell away, soon to succumb to Wood for third. Losing the lead when he put a wheel on the grass, York managed to regain it for the win over Quinn. 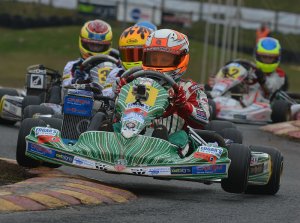 Connor Hall is another driver on top of his game at the moment, and he kept up the momentum at the twisty Cumbrian track, built in an old quarry. Hall was quickest over Sandy Mitchell and Josh Smith, and fastest overall with Alex Stott topping the other session. Heat wins went the way of Hall twice and Harrison Thomas but it was the more consistent Dan Zelos who lined up alongside Hall on the first final front row, Smith and Stott behind. As Hall disappeared into the distance, by the flag he was 11s ahead, Zelos newly crowned with the O Plate, tried in vain to catch up and indeed came under pressure from Cameron Roberts at the end. Alex Sedgwick stormed up to fourth as Smith succumbed, Thomas next. For the second final all the karts were on slicks and yet again Hall made a great start whilst others crashed, Jack McCarthy spinning into the first corner. Zelos eventually got the upper hand on Roberts and Thomas battled in a train of karts, finishing fourth on the track but suffering a five place penalty. That elevated Tom Gamble, Alex Sedgwick and Smith. 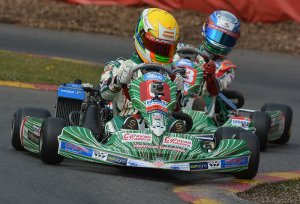 Ben Hingeley and Luke Knott were each quickest in the their timed sessions but both suffered 5 place penalties relegating Hingeley to the second row for the first final behind ‘Joe’ Zhou and Tom Harvey. Knott was mid grid but failed to start when his engine oiled up. Hingeley, Jake Walker and Greg McKenzie took the heat wins. Zhou leapt into the lead with a handy gap over Hingeley as Nathan Aston leapfrogged Jai Nijjar for third. Harvey was battling hard to keep fourth from Jack Bartholomew. But the latter was flagged in for a bent sidepod, emerging a lap down. Hingeley had caught and even passed Zhou, they swapped again and again but Hingeley had the win. Josh Price came all the way from fourth last and a repechage win to fourth place. There was so much carnage at the start of the second final that it was stopped to lecture the drivers. Zhou slipped past Hingeley to lead after the restart and just held onto the advantage throughout, everyone on slicks but damp off line. Robbie Lightfoot wore down Walker’s defence of third, but fell back mid race to ninth, Walker soon to follow but to fifteenth. Philip Rawson took up the position but overshot the hairpin and had to settle for fifth as Knott stormed up from the back to the podium. Harvey had been forced to start from the back after damage at the first start, and he made it to eighth but was then excluded for driving standards. Bartholomew was another slicing through the field from near last to fourth.

Adam Glear and James Singleton were at the top of their respective timed qualifying sessions, but Charlie Eastwood, Oliver Hodgson and Josh Collings took the heat wins. However it was rookie Adam Glear who snatched pole for the first final off Philip Morin, Eastwood and Charlie Turner, whilst Singleton was on grid 7 and the champion Sean Babington languished on the ninth row after a series of heat clashes and he never really recovered. Eastwood wasted little time in jumping Glear, the latter succumbing to Kyle Fowlie as well. John Stewart, having regained his O Plate the previous weekend had fallen to last, but would finish 19th in the first and 14th in the second. Singleton was another in the wars, he only made 16th. Luke Hughes made steady progress and nabbed third from Glear on the last lap. Eastwood was out-gunned at the start by Fowlie, Myers –from fifth on the grid – and Hughes, but picked his way back to the front and pulled a 3s gap over Fowlie. Hodgson, another one in the final one incidents finishing tenth, stormed back into contention to pressure Fowlie after passing Connor Jupp. Jupp had to win the repechage for his place in the finals, reaching ninth in the first one so was very happy with fourth. Eastwood, who has already sealed a place in the Max Challenge Grand Finals, now comfortably leads this qualifying series as well.