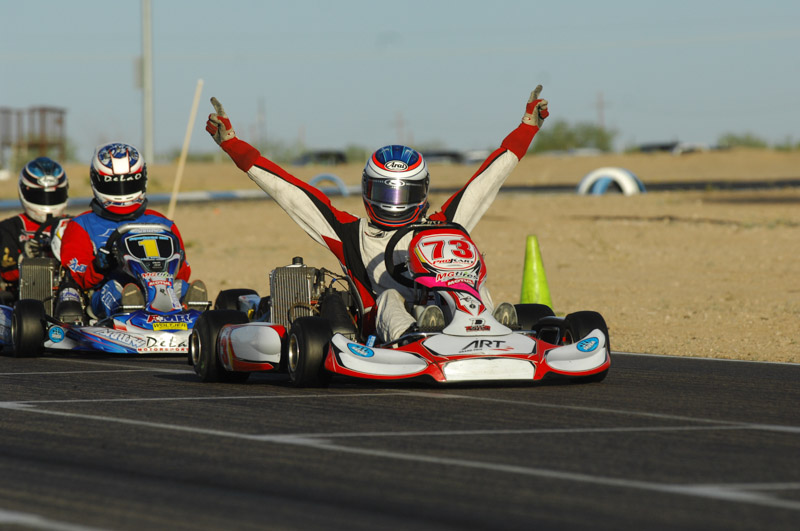 The 2013 Superkarts! USA Pro Tour kicked off in the month of April, hosting the SpringNationals at the Musselman Honda Circuit in Tucson, Arizona. Last year’s event set the stage for the championship chases, with a number of winners turning that momentum into a title come the SuperNationals. For Andrew Zimmer, that could be the same progression following two victories in the competitive TaG Senior division in his debut with the new ART Grand Prix America operation. His performance earned him the title of eKartingNews.com Driver of the Month for April 2013.

Zimmer’s story was one that developed as the weekend progressed. The Washington State University student was unable to attend Friday practice as a test kept him at school. Missing the full day of practice limited him in his time aboard the new ART GP chassis, which he made a few laps the weekend prior, but under much different conditions at a track closer to home.

Zimmer arrived Saturday morning and was among the top-10 quickest in the warm-up prior to qualifying. It translated in the official timed session, as Zimmer was classified sixth overall in the 38 driver field. The opening heat race, Andrew advanced up to the fourth position while recording the fast lap of the 10-lap race. The progressive format of the series put him outside row two for the start of heat two. Despite a solid start, Zimmer was shuffled back to eighth by the checkered flag. Starting from row four, Andrew was quick on cold tires, advancing to second by lap four and taking over the lead on the following circuit. Breaking away with Louie Pagano, the two set the pace the remainder of the 20-lap event. Pagano took over the lead once, but Zimmer retook the position back quickly. Never putting a wheel wrong, Zimmer held on to secure his first SKUSA Pro Tour victory in his debut.

He began the next round back toward the front of the field in the qualifying on Sunday, placing third in a battle for the pole position that saw five drivers within 92-thousandths of a second of each others best lap. Zimmer jumped to second at the start of heat one, and followed defending SKUSA Pro Tour champion Phil DeLaO to the checkered flag. In heat two, Pagano got the jump on Zimmer and held to the second position after the 10-lap run, leaving Andrew in third. The main event was filled with controversy, and thankfully did not impact Zimmer’s performance in the long run. He and DeLaO broke away from the field and appeared to have dual set up for the 18-lap run. Mike Giessen however charged through the field and caught the leaders, competing aboard what would be determined after the race as an underweight kart. The two were not aware, and raced Giessen as if they were fighting him for the win. On the final lap, Zimmer was able to work past Giessen for the overall lead, and held on to score his second win of the weekend.

The two wins place Zimmer atop the SKUSA Pro Tour championship standings, heading into the SummerNationals in July with a 50 point advantage. Zimmer began at the local level, and was part of the Red Bull Driver Search program in 2005, placing seventh overall in the west coast event. After a few years at the national level in JICA, ICA and ICC competition, Andrew moved on to car racing. Three years in formula car racing and three in stock cars, Zimmer has returned back to karting while finishing up his studies at Washington State University.

It should also be noted that fellow Northwest driver Luke Selliken nearly did the same feat, missing Friday practice and Saturday qualifying in TaG Junior. The defending Pro Tour champ placed in the top-10 on Saturday, challenging for the victory, and came back Sunday to sweep the day – a tip of the hat from EKN to Selliken for his performance. 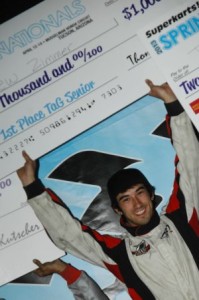 Chassis: ART Grand Prix
Engine/Engine Builder: Rotax: BRK Engines, Leopard: D-Power
Sponsors: Black Flag Racing Products, ART GP America, Design Sound NW, D-Power, BRK Engines, Fastkart Indoor Speedway, Alpine Haus Marina
Series You Compete In: SKUSA Pro Tour, Rotax Can-Am ProKart Challenge
Years Karting: 11
How did you get started in karting? Wanted to get into motocross, mom said absolutely not, dad convinced her that karts weren’t that fast and so we got started when I was 9 in Comer
What has been the high point in your racing career? Winning both days at SKUSA SpringNats this year. Before that was getting on the podium in S1 at the 2008 SKUSA SuperNats.
What are your goals in racing? To make my sponsors happy so they will continue to support me so I can race
In a few words, how would you describe your driving style? Smooth, patient, aggressive, consistent
Funniest moment at the race track? For an entire year, I got everyone, including the announcer, to yell POLO when I yelled my teammate Marco Eakins name then Marco would yell REALLY!?!?. MARCO!!!

What do you do when not at the track? College work, actual work, or preparing for the next race
What are your goals outside of karting? To finish my EE degree within the next year and eventually get my Patent Law degree
What type of street car do you drive? Mini Cooper S
What type of street car would you like to drive? Lotus Exige, e90 m3
What are your pet peeves or things that irritate you? People that do not listen and people that drive way under the speed limit then speed up when you try to pass them
What do you think could be done to improve the sport of karting? Consistent rule calls by race directors everywhere. That will keep people from turning away from racing, and less politics in general.
What are your favorite aspects about the sport of karting? The competitiveness that comes from the sport is my favorite thing, but the aspect of being with a team that acts as a family and pushes each other to excellence is a close second.