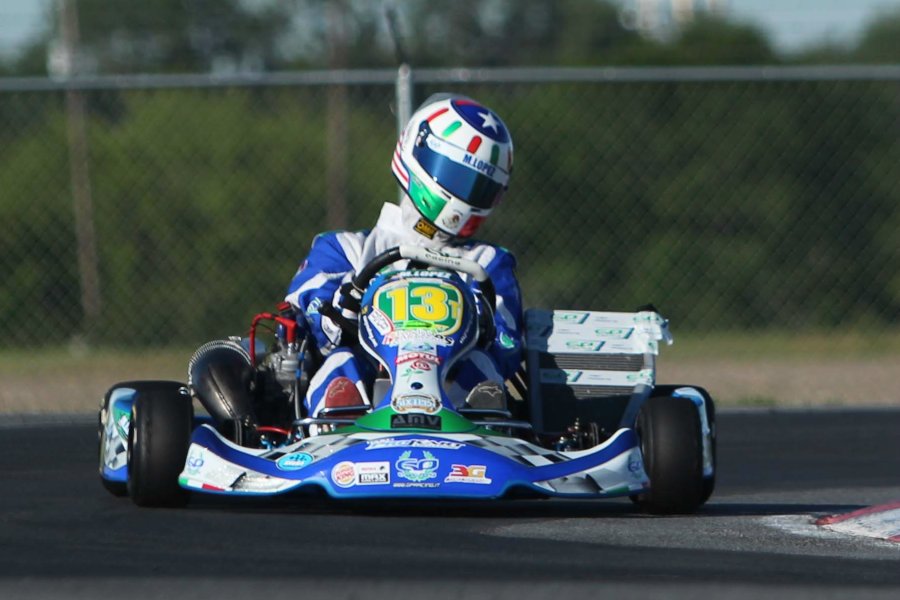 The opening weekend of the Texas ProKart Challenge regional series – presented by 3G Kart Racing/Burger King®/Fernelius Alvarez Attorneys/Dallas Karting Complex – was a successful start to the 2013 season. A series combining the categories of the Superkarts! USA and United States Rotax Max Challenge organizations into one premier regional program visited the Dallas Karting Complex on May 3-5 for the opening two rounds of championship chase. Over 100 drivers battled the very young facility, setting up for what will be an exciting year with races planned for Texas, Oklahoma and Louisiana.

“This was a great way to open up the season,” stated Texas ProKart Challenge administrator Dave Pauly. “We increased our entry numbers well over 40% of what we had at our opening weekend last year, with a number of classes welcoming new drivers to the series. Our only issue on the weekend was a few red flag incidents that put us off schedule, so we had to adjust our timeline. That will be remedied for our next event at Gulf Coast Kartways. I can’t thank Kevin Adds and Mike Jones enough for their efforts and promotion of our opening rounds, and look forward to four more great events as the season progresses.”

A solid 15 drivers made up the S5 Junior Stock Moto field at the opening weekend of the Texas ProKart Challenge
(Photo: dreamscaptured.net)

A number of the racers on hand had already contested the opening round of the SKUSA Pro Tour season, finding success at the SpringNationals in Tucson back in April. Many of those same racers who secured victories and podium finishes took part in the opening rounds of the Texas ProKart Challenge. Miguel Lopez and Jordon Musser set the tone of the season in the S2 Semi-Pro Stock Moto and the S4 Master Stock Moto. Lopez dominated the 14-driver S2 field in the first round of action to sweep the on-track action and earn maximum points available. SKUSA SpringNationals winner Garrett Boone was second with Ryan Kinnear in third. Cody Freeman found speed overnight and was the top qualifier in the morning. After some shuffling in the opening lap, Zach Herrin began the heat race with the lead but was tracked down by Lopez in just three laps. He would take over the top spot and score the win. Herrin fought back and led more in the main event, keeping Lopez honest until he retired on lap 13. This gave Lopez a clean run to his second victory of the weekend. Kinnear was the runner-up while Freeman was an impressive third. Musser was perfect throughout the weekend as he showed the way in S4 during each and every session. Milton Rivera ran second to Musser in both main events. Russell Blink was third on Saturday while Graig Alvarez filled the position on Sunday.

The largest class of the weekend was the S5 Junior Stock Moto category, welcoming a strong roster of 15 drivers as the class continues to spread across the country. Derek Scott Jr. was the quickest driver in the opening round qualifying session, but it was Patricio O’Ward who led the field the remainder of the day. O’Ward edged out Scott in both heat races, leading to a flag-to-flag victory in the main event. Scott retired on lap three, allowing Nathan Adds to advance to second with Raul Guzman placing third. Adds picked up the pace Sunday as he swept the day’s action. Securing the pole position in qualifying, Adds led all 10 laps of the heat race. The intensity picked up for the main event, as both Scott and O’Ward challenged the home track driver. A total of six lead changes took place in the 18-lap event, with the victory coming down to a photo finish as Adds edged out Scott by just 0.001 seconds. Guzman was able to slide past O’Ward for the third step of the podium. 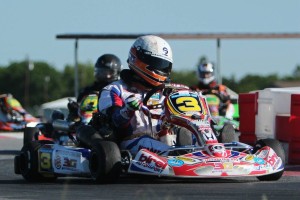 TaG Cadet is another category gaining ground throughout the United States, thanks in part to the Vortex Mini Rok engine program that Superkarts! USA provided for the regional series in 2013. A solid 13 drivers took on the opening rounds of the Texas PKC with Nicholas Brueckner earning the victory both days. Brueckner was the top qualifier for Saturday’s round of action, but was unable to complete a lap in the opening heat race, allowing Emiliano Richards to earn the win. Brueckner came back in heat two, going from last to first in 10 laps to edged out Richards for the win and pole position in the main event. During the 16-lap event, Brueckner was joined by Max Hewitt as they ran nose-to-tail the entire distance. On the final lap, Hewitt was able to reach the checkered flag first, but officials penalized him one position, giving the victory to Brueckner. Richards ran alone in the third position. Hewitt put Saturday’s action behind him and started out on top in round two qualifying. He backed it up by edging out Brueckner for the win in the heat race. The main event would be Brueckner playing the chess game correctly, as Hewitt led the first 15 laps before Brueckner secured the lead and the victory on the last lap. Hewitt settled for second with Richards moved to third after a penalty was given to Luis Alfonso Perez Pena, dropping him to fourth. Austin Osborne was the top driver in TaG Junior, besting Rodrigo Rejon. Wyatt Maness and Brian LaBarbera split the victories in TaG Senior. Maness swept round one, and was in the process of duplicating that in round two but retired after just two laps. That gave LaBarbera the victory. Paul Jones and Patrick Roth each took home a victory in TaG Master. Jones held off Roth and Jesus Robles on Saturday as Roth edged out Jones and Mike Maness on Sunday.

The Burger King Rotax Max Challenge program runs within the Texas ProKart Challenge program and it welcomed a number of Rotax racers from the region, all earning their first punches toward the Rotax Grand Nationals later in the year. Mini Max was the largest class of the group, welcoming 11 drivers. Luis Alfonso Perez Pena appeared to be the driver to beat early on, as he was the top qualifier for round one. He continued his run out front, winning both heat races and was in contention during the main event. Parker Chase and Max Hewitt gave chase the entire time, with Hewitt holding the lead for a few laps. On the final circuit, it was Chase who came through the final few corners with the lead and took the checkered flag for the victory. Pena settled for second with Hewitt third. Sunday was all Nicholas Brueckner, as he scored his third victory of the weekend. Brueckner was top driver in qualifying, the heat race and outran Pena and Chase in the 16-lap main event. 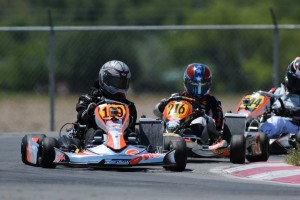 Rotax Senior saw 10 drivers take on the DKC circuit for two rounds of racing with Chaz Nagel and Logan Bearden the winners on the weekend. Bearden was the quickest driver to begin round one, as he led the field in qualifying and the two heat races. Out to a lead in the main event, Bearden retired after just seven laps. This handed the lead to Alex Tartaglia but on lap 14, Chaz Nagel took over the lead and scored the victory. Tartaglia settled for second with Conner Clay in third. Bearden returned with the same torrid pace, sweeping the day’s action. The shortened main event saw Bearden win by over five seconds ahead of Nagel and Tartaglia.

Micro Max was another class featuring two different winners. Ethan Arndt was the top driver in the qualifying session, only to see Maxwell Waithman come from third on the grid to win the first heat, repeating the feat in heat two. Waithman appeared to have control of the field until a charging Emiliano Richards charged through the field and take over the lead on lap eight. Richards would lead the remaining laps to secure the victory with Waithman trailing. Hannah Greenmeier would complete the podium. Day two, Waithman was the top driver in every on-track session to earn maximum points. The main event went down to the wire with Richards leading most of the race before Waithman took control and led at the checkered flag. Richards finished second with Arndt in the third position.

A total of 12 DD2 machines contested the opening rounds of the series, featuring five in DD2 and seven in DD2 Masters. Alex Tartaglia swept the action on Saturday, earning maximum points as he bested multi-time Team USA member Nathan Mauel and CJ Cramm. On Sunday, Cramm was the top qualifier, only to see Tartaglia score the heat race win. The main event, however, was Mauel’s turn at the point. Tartaglia led the first 13 laps until he retired, handing the lead and victory to Mauel. Cramm finished second with David Edwards in third. In DD2 Masters, the eKartingNews.com US Rotax Driver Rankings number one driver Dan Lubin swept Saturday’s action with Lance Lehrman doing the same on Sunday. Darrel Hinshaw and Lehrman completed the podium behind Lubin, while Mike Wherley was the only other entry to finish the main event on Sunday. 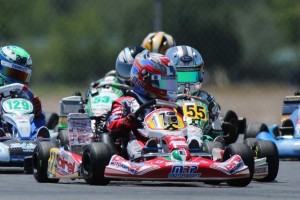 Two drivers showed the way in the Rotax Junior category with Nathan Adds and Jesse Woodyard standing atop the podium on the weekend. Woodyard was the top qualifier for Saturday’s action, but relinquished the top spot to Adds in heat one. They went 1-2 again in heat two, with Adds holding the advantage, matching the results for the main event. Woodyard ran second to Adds with Thomas Beaudoin completing the podium. Adds continued to show the way on Sunday, recording fast lap in qualifying and earning the heat one win. In the main event, Adds would be able to complete just one lap, retiring with a mechanical issue. This left Woodyard with a clean run out front to the checkered flag with Collin Russell second and Beaudoin in third. Rotax Masters completed the weekend with David Pergande and Dean Boyd earning victories.

The next two rounds of the SKUSA Texas ProKart Challenge will take the teams and drivers to the Gulf Coast Kartways in Katy, Texas on May 31-June 2. Visithttp://www.texasprokartchallenge.com and ‘Like’ them at Facebook.com/texaspkc to keep track on the updates for rounds three and four.