Round 3 of California ProKart Challenge Produces Number of Repeat Winners 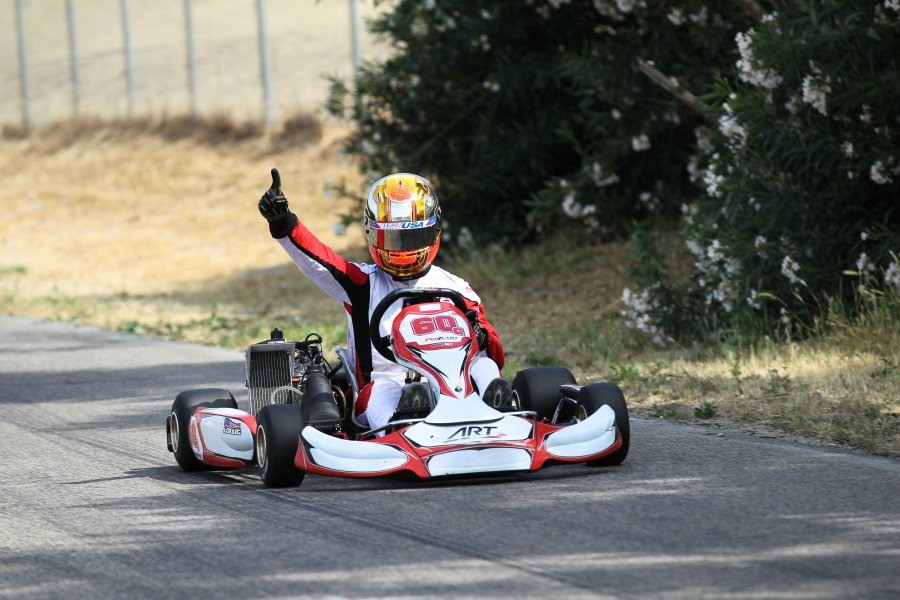 Jake Craig takes over the lead in the TaG Senior title chase with his second victory of the season
(Photo: dromophotos.com)

The California ProKart Challenge returned back to action this past weekend (May 3-4) as the Superkarts! USA regional program hosted round three of the 2013 season at the Adams Motorsports Park in Riverside, CA. The historic facility for karting brought together another solid turnout, welcoming 115 drivers to take on the challenging 3/4-mile course. The weekend saw a number of drivers returning to the top of the podium, setting the stage for the second half of the championship chase that will take place in the coming four months.

Another talented Pure Karting TaG Senior roster battled for round three, with Jake Craig breaking through for his second straight victory. Former series champ Travis Lowe edged out Craig for the pole position, stealing 10 bonus points. Austin DeMent was quickest on track in heat one, advancing up to the front and scoring the win over Lowe and Craig. He backed it up in heat two, leading all 12 laps with Lowe and Craig fighting it out for second once again. DeMent led the field to the green flag for the main event, but it would be the only time at the front as contact during the opening lap would put him off the track and out of the race. This allowed Craig to take over the lead and hold it all the way to the checkered flag, taking over the championship lead with the absence of Alex Keyes. Mason Daughters held off Bobby Kelley for the runner-up position, with Alejo Fernandez and Matt Johnson completing the top-five. 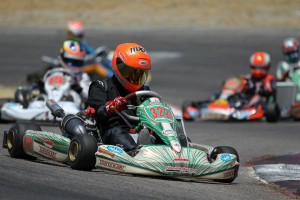 The Extreme Karting/Vemme S1 Pro Stock Moto category was controlled by rookies all day. The ‘Flyin Hawaiian’ Alec Gumpfer began the day scoring the pole position in qualifying, edging out two-time winner Billy Musgrave by a scant 0.083 seconds. Musgrave responded with a flag-to-flag win in heat one, and again in heat two, as Gumpfer trailed closely. In the main event, Musgrave proved to be too strong as he dominated the 20-lap feature for a five-second victory. Gumpfer recorded his first S1 podium with the runner-up position, and defending series champ Jimmy McNeil edged out Ryon Beachner for the final podium spot.

Connor Wagner set the pace once again in the Buddy Rice Karting S2 Semi-Pro Stock Moto division. The Texan swept the day, scoring maximum points to extend his championship lead. Round one winner Robert Marks was the lead challenger through qualifying and the opening heat race before Trevor McAlister and Don Whittington caught up. With the S2 field mixed in with the S1 class, Wagner went on to finish second overall, leaving the rest to battle for second. Marks would retire early on in the 20-lap race when contact broke his chassis, while McAlister was shuffled to the back and out of contention. That allowed Don Whittington to secure his best PKC finish with the runner-up spot, while Mariana Ramirez earned her first podium finish of the season in third.

No one has been able to stop Billy Cleavelin this year in California PKC action, as the veteran earned his third victory of the season and a second straight event sweep in the Mike Manning Karting TaG Master category. Cleavelin was the top qualifier by over six tenths, competing on his home circuit. Ethan Wilson trailed in both heat races but led early on in the feature – before Cleavelin retook the position on lap six. Wilson was then forced to retire a lap later with an electrical issue. This moved North Carolina and SKUSA Pro Tour regular Chuck Gafrarar into second until contact with John Molinare detached his exhaust system from the engine, forcing a retirement. Molinare continued on, finishing second to Cleavelin with Federico Aquini completing the podium. 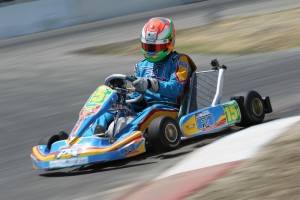 Rob Logan was the driver to beat early on in the Leading Edge Motorsports S4 Master Stock Moto class. Logan, making his second start of the season, earned the pole position in qualifying and held off Nick Firestone for the win in heat one. Firestone found more speed in heat two, working past Logan and scoring the win with Logan on his bumper. The speed carried over into the main event as Firestone led the first 19 laps of the feature until his rear gear came loose and cost him the victory just a half-lap away from the checkered flag. This put Logan into the lead and atop the podium with the win. Championship leader Mike Mantel climbed back from early troubles in the day to finish second, as round two winner Willy Musgrave was third. The Leading Edge Motorsports S4 Magnum Stock Moto division saw Rick McAllister score his first California PKC victory of the year and stopping the win streak of Luke Bianco. Ken Manning completed the podium. It was a record turnout in the 2 Wild Karting S3 Novice Stock Moto class, as Gianfranco Casadei earned his second straight victory, with John Reikes second and Sean Reeves in third.

It was Brenden Baker who triumphed once again in the Phil Giebler Racing TaG Junior class. Carter Williams had things under control as the event got underway, nipping out the competition for the pole position while fighting off Christian Brooks for the heat one win. The intensity picked up in heat two as Baker and Noah Grey led a charge against Williams, who was shuffled back to fifth on the opening lap. Baker would cross the line first but was penalized two positions for an on-track infraction, giving the win to Grey and moving Brooks up to second. Four different drivers held the lead throughout the 20-lap feature, with the victory coming down to the final lap. At the checkered, Baker scored his second victory of the season, with Brooks and Grey completing the podium. PKC newcomer Aaron Aguirre earned the fastest lap of the race and finished in fourth with Nathan Seegrist in fifth. 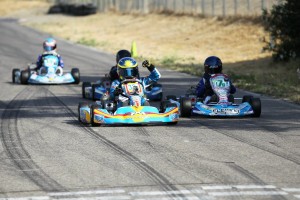 Trenton Sparks edged out the competition for his first TaG Cadet win of the series
(Photo: dromophotos.com)

Riding off the momentum of his first SKUSA Pro Tour victory, Jarred Campbell returned to PKC competition for his third straight win in the series and his first sweep of the season in the SwedeTech Racing Engines S5 Junior Stock Moto category. Campbell was at the front of the field all day, hounded by defending champ Carter Williams until he retired with two laps to go in the main event. That promoted Garrett Dixon to second in his third straight trip to the podium, with Cruz Fiore earning his best finish of 2013 in the third position.

The Sunshine Daydream Creations TaG Cadet class welcomed another field of over 20 drivers for a third straight weekend. The racing was close once again, decided in just the final few inches of the main with Trenton Sparks scoring his first win of the season. Jonathan Shone was the top driver in qualifying as he put down a lap two tenths quicker than championship leader Ryan Schartau. Sparks, however, had the speed once it came down to racing, jumping forward into the lead on the opening lap of heat one and leading all eight laps for the win. Shone kept it closer in heat two, coming just 0.092 seconds away from stealing the race win. The 16-lap main event came down to a photo finish as Sparks scored the victory. He, along with Shone and Schartau, exchanged the lead numerous times, with Sparks out front as he took the checkered flag by a slim 0.075 seconds over Schartau. Jagger Jones squeaked in to take third from Shone at the line with Tomas Mejia in fifth. Ten drivers were categorized in the TaG Rookie division for the podium honors, with Jace Jones taking top honors, followed by Mia Butts and Jude Logsdon.

Following the racing on track, Superkarts! USA’s Tom Kutscher handed out another batch of lucrative podium raffle prizes, including: 2 free cans of MS98 fuel, 2 FREE race entries to the next California PKC race at Willow, 1 FREE Honda Top End Kit, 2 FREE sets of MG-SK tires, and 1 FREE bucket of Mothers Polish car care products. In total, over $1,000 in products was gifted to racers in attendance.

The California ProKart Challenge will return to action on May 31-June 1 as the program returns to the Willow Springs International Raceway, taking on the karting circuit in the reverse direction. Superkarts! USA would like to thank the following companies, in addition to the support of the class sponsors, for their aid toward the 2013 season: MG Tires, Mothers Polish, Honda/HPD, VP Racing Fuels, Motul, MIR, and AiM. Stayed tuned to http://www.superkartsusa.com for more information on round three, as well as updates on Twitter at @SuperKartsUSA and at Facebook.com/SKUSA.