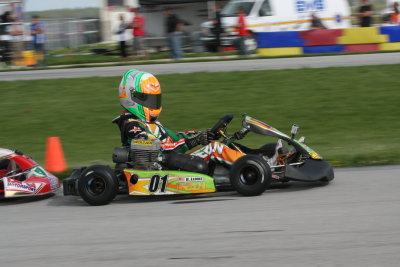 The Russell Karting Specialties/L & T Manufacturing Route 66 Sprint Series presented by Bridgestone/Margay and Grand Products kicked off the 2013 season at New Castle Motorsports Park on May 4th and 5th in New Castle, IN. The event was sponsored by Bestway Drywall, Inc. 266 entries competed over the weekend under mostly dry conditions with only a few races on Sunday having to mount up the rain tires. Brandon Lemke was able to capture three class wins over the weekend in Yamaha Sportsman I and II and Komet Sportsman I. Double class winners included Mark Fineis in Yamaha Rookie I and II, Becker Reardon in Yamaha Junior Heavy and Lite and Billy Lewis in Leopard 125 I and the Jim Russell Memorial Leopard race.

The state-of-the-art New Castle Motorsports Park (NCMP) is a favorite among many racers due to the continued improvements done to the facility. New bench seating lined the pit hot grid which replaced the old pit fencing. After the completion of racing on Saturday, a free chicken dinner was served to all in attendance sponsored by Bestway Drywall/Branscum family. A trophy presentation was done before the dinner where the top five in each class from Saturday’s races received their eagle and gold cup awards on the new iKart awards podium. A big thank you goes out to Mike Adams and the Dismore family for hosting the Route 66 Series at their great facility. 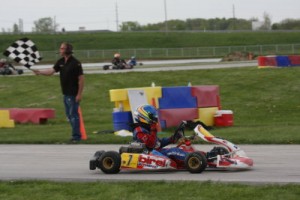 The first final racing on Saturday was the Hollywood Crane Service Kid Kart I Championship class paced by pre-final winner Carter Anderson. Camrin Cass took the lead on lap one and led every lap to take the win. An off track event early in the race coming out of the final turn dropped Donald Whorton and Carter Anderson back to second and third. Pierce Sondrup and Conner Churchill rounded out the top five in the 15 kart field.

The next final racing was the RLV Yamaha Senior Lite class with 16 entries. Pre-final winner and fast qualifier Camden Speth and Sam Cate paced the start. Cate grabbed the lead into turn two with Speth, Ben Hewitt and Brad Brittin close behind. Speth moved to the point about mid-race and Brittin worked by Hewitt for third place. Cate took the lead back on the final lap however Speth (Arrow) drafted by Cate for the win on the final lap. Brittin, Hewitt and Adam Crepin rounded out the top five.

The Triple E Sales Yamaha Sportsman I class gridded next with a large field of 23 entries. Pre-final winner Brandon Lemke took the lead at the start followed closely by David Malukas and Zach Holden. The front trio would gradually pull away to a huge 14 second gap to battle for the win. The next pack of Alex Bertagnoli, Giovanni Bromante and Drew Lindley were battling for fourth place. Sam Mayer, Austin Schaff, Luke Fineis, Jason Welage and Dillon Schwanbeck joined the pack next battling for fourth through 10th. On the final lap, Holden drafted by Malukas into the final turn to claim second with Lemke (Merlin) taking the win by just .034 seconds. Fineis and Bromante rounded out the top five after karts went about five wide through the final turn.

The Yamaha Junior Heavy class sponsored by Woltjer Racing Engines was up next with 15 entries. Pre-final winner Becker Reardon and Kenlen Morse paced the start. Morse grabbed the early lead however Reardon moved to the point by lap two followed by Olivia Horn and Killian Keaveny. Horn moved to the lead next until Reardon (Birel) would take the lead for good edging Horn by .684 seconds. Morse, Keaveny and Emily Hulbert rounded out the top five.

The Franklin Motorsports Leopard 125 I class staged next. Mark Dismore Jr. and Billy Lewis paced the field at the start. Lewis took the lead into turn two followed by Dismore, Crepin and Sam Cate. Dismore held second for most of the race until Crepin was able to work by him. Lewis (Ultimate Karts) pulled out to a small .971 second lead at the finish over Crepin. Dismore, Cate and Chase Jones rounded out the top five. 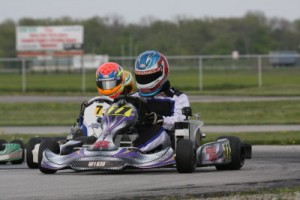 The next class racing was the Jet Karting Yamaha Rookie I class with 17 entries. Mark Fineis took the lead at the start and began to pull away from the field. James Lynch was able to catch Fineis and draft with him for a while. Fineis (Birel) took the win by 1.5 seconds over Lynch with Andrew Castelucci, Caden Paskiewicz and Talan Drake rounding out the top five.

The Ballistic Designs Yamaha Masters class gridded next for their final with Matthew Roberts and George Wilson pacing the start. Wilson led the first few laps followed by Brian Zirves and Roberts. Roberts (Margay) eventually worked his way to the front and pulled away to a seven second win over Wilson, Zirves, Dave Timmerman and Brian Julien.

Next up was the Schwanbeck Family Racing Komet Sportsman I class with 13 entries. Pre-final winner Brandon Lemke and Alex Bertagnoli paced the field at the start. Lemeke grabbed the lead and gradually pulled away from the field leaving David Malukas, Sam Mayer, Austin Schaff, Bertagnoli, Giovanni Bromante and Stephen Dial battling for second. Lemke (Merlin) pulled out to a 11.5 second lead at the finish. Malukas edged Schaff at the finish for second place by just .082 seconds and Mayer and Bertagnoli rounded out the top five.

After the completion of the Saturday finals, a special 20 lap event called the Jim Russell Memorial Leopard race was held. Ten drivers were competing for the $750 first place check and special event trophies for the top three. Mark Dismore Jr. and Billy Lewis paced the field at the start. Dismore got knocked off the track on lap one and was working hard to catch the lead pack of Lewis, Armin Cavkusic, Adam Crepin, Chase Jones, Colton Ramsey and Jimmy Clark. Dismore eventually worked his way up to second place, however would fade to fourth by the end of the race. Adam Crepin worked his way into second place and was challenging Lewis for the win, however Lewis (Ultimate Karts) held of Crepin by .161 seconds at the finish. Clark, Dismore and Ramsey rounded out the top five. Clark also won a set of Bridgestone tires for qualifying in the fifth position.

At the Sunday morning driver’s meeting, a set of Bridgestone YLC tires was given away to Matthew Roberts in a drawing sponsored by Margay/Bridgestone. After one round of practice, eight classes of racing took place with 8-lap pre-finals and 10-lap finals. 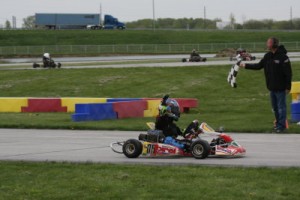 The first final racing on Sunday was the Haddock Limited Komet class. A few small rain showers on Sunday had wetted down the track enough to call for rain tires. Pre-final winner Christian Besasie and Brad Brittin paced the field at the start. Brittin grabbed the early lead and Besasie was off the track on lap one. Kilian Keaveny (Top Kart) worked his way through the field and pulled out to a 15 second win at the finish. Ryan Weyer, Kyle Gluth, Brittin and Brenden Trent rounded out the top five.

Next up was the Express Karts & Parts Komet Sportsman II class with 13 entries. The track was still wet enough to require rain tires. Austin Schaff and Sam Mayer battled for the lead early in the race followed by Dillon Schwanbeck. Mayer moved to the point mid-race and held the lead until the final lap where Schaff (Merlin) was able to draft by and take the win by .131 seconds. Schwanbeck edged Mayer for second followed by Brandon Lemke and David Malukas rounding out the top five.

The Hollywood Crane Service Kid Kart II Championship class was racing next paced by pre-final winner Donald Whorton and Camrin Cass. The track remained wet enough to require rain tires. Whorton led the first few laps until Cass and Aidan Hinds drafted by him on the long straightaway. Hinds pulled out to a 2.5 second win over Cass followed by Christian Franchuck, Whorton and Carter Anderson making the top-five podium.

The next final gridding was the Laukaitis Racing Yamaha Senior Heavy class with 17 entries. The track had dried out enough that rain tires were no longer required. Sam Cate and Justin Vancil paced the start on a still somewhat slick track from the rain. Vancil, Collin Griffin and Cate mixed it up for the lead in the early going. Cate was able to break away to a slight lead until Nicky DeFronzo ran him down and passed him for the lead. DeFronzo got off the track in the last corner on lap seven allowing Cate (Tony Kart) to take the win by .631 seconds over Griffin with Vancil, Ben Hewitt and Adam Crepin rounding out the top five.

The Yamaha Junior Lite class sponsored by Comet Kart Sales was up next. Pre-final winner Kilian Keaveny and Ryan Weyer paced the start. Keaveny and Becker Reardon were battling for the lead when Reardon slipped off the track coming out of turn 17. Reardon (Birel) was able to work his way back to the front and pass Keaveny for the win by just .11 seconds. Dillon Morley, Keneln Morse and Emily Hurlbert rounded out the top five.

The next class racing was the Switch Racing Engines Yamaha Sportsman II class with 23 entries. David Malukas took the lead into turn two followed by Brandon Lemke and Sam Mayer. Lemke (Merlin) moved to the lead on lap four and held off Malukas at the finish by 1.4 seconds. Zach Holden, Mayer and Drew Lindley rounded out the top five.

Next up was the Leopard 125 II class sponsored by Kart Lift paced by pre-final winner Colton Ramsey and Adam Crepin. Crepin took the lead into turn two followed by Ramsey, Chase Jones and Sam Cate. Cate would drop out on lap four leaving Crepin, Jones and Ramsey to battle for the win. Crepin (Merlin) held on for the win over Jones with Ramsey, Jimmy Clark and Armin Cavkusic rounding out the top five. Ramsey set the fastest race lap at 1:06.546.

The last class racing on Sunday was the Yamaha Rookie II class sponsored by CKT Racing Engines. Mark Finies (Merlin) dominated the race much like Saturday pulling out to a nine second lead at the finish. Andrew Castelucci, Carter Cass, James Lynch and Talan Drake rounded out the top five at the finish.

Merlin chassis captured the most wins over the weekend with six followed by Birel (3), Ultimate (2) and Margay, Arrow, Tony Kart and Top Kart with one win each.

The next round of the 2013 Route 66 Series will be held at Jet Karting at Michiana on June 14th and 16th. A special Yamaha Junior Shootout money race sponsored by QPS Employment Group will be held on Saturday after the finals. Pre-entries must be post marked by May 27 to receive the discount. Friday practice will be available. All entrants will have a chance to win a set of Bridgestone YLC tires in a drawing held at the Sunday morning driver’s meeting. For more information about Jet Karting at Michiana, visit http://www.jetkarting.com . For more information about the Route 66 Sprint Series, visit http://www.Route66KartRacing.com