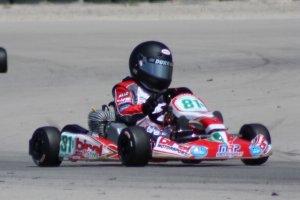 After a very successful start to his 2013 karting season, up and coming motorsports star Payton Durrant added four more victories to his resume this past weekend. Competing in the Superkarts! USA (SKUSA) Rocky Mountain ProKart Challenge program at the Miller Motorsports Park in Tooele, Utah, Durrant was unbeatable in both the Rotax Micro Max and TaG Cadet divisions as he swept the weekend’s action.

With round one of the series taking place on Saturday, Durrant would start his campaign off strong with his morning qualifying efforts. Scoring the fast lap in both the Micro Max and TaG Cadet divisions, Durrant would start his wheel-to-wheel competition from the pole position. Flexing his muscles in the TaG Cadet class, Durrant claimed both heat race wins and would retain his pole position for the day’s main event. Really showing his true speed in the final, Durrant proved to be the fastest kart on the track and at times, was more than one second quicker than his closest competitor. Leading from flag to flag, Durrant took the checkers by nearly twenty seconds ahead of his closest rival.

The Micro Max division would be much of the same for Durrant once the racing would get underway, but a slight problem in qualifying would see the youngster qualify in the fourth position. Scoring the fastest lap but with a transponder that was not working, Durrant’s quick lap was not recorded and the Birel pilot would start his first heat on the outside of row two. Moving forward to take the win in heats one and two, Durrant would start from the inside of the front row in the main event and never look back. Jumping to the lead early, Durrant led all but a handful of laps and dominated to take his second victory of the day.

Back to the same Miller Motorsports Park facility for round two of the series on Sunday, Durrant continued where he had left off on Saturday. Taking the pole position and two heat race wins in the TaG Cadet division, Durrant would score the main event pole position. Falling back to third on the start of the final, Durrant would not lead lap one, and that would be the only lap of the day that he was behind a fellow competitor. Moving to the point midway through lap two, the MRP-Birel America pilot quickly opened a gap to take another lopsided victory.

Making it four for four on the weekend, Durrant was again the driver to beat in Micro Max. Scoring the fast lap in every on track session as well as leading every single lap of the day, the 2013 Rotax Challenge of the Americas Micro Max Champion swept the day and took home his fourth win of the weekend.

2013 has been a winning season for Payton Durrant, as he already has claimed the Rotax Challenge of the Americas (COA) Rotax Micro Max championship and accompanying invitation to the Rotax Max Challenge Grand Finals (RMCGF) in New Orleans, Louisiana later this season. Competing in the same event that will see more than 300 drivers from around the world battle in identically prepared karts to become Grand Finals champions, Durrant, with his ticket to the event, will battle on the same race course in the Micro Max exhibition class. Taking four of six main event victories in the COA series and never posting a finish worse than fifth, the final event of the series saw Durrant sweep the weekend’s competition and accumulate the highest point total of any driver that weekend.

Next on the docket for Durrant will be round one of the Utah Kart Championship where he will see action in both the Rotax Micro Max and Junior 1 – 4-cycle classes before traveling to Denver, Colorado for round three in the Rocky Mountain ProKart Challenge.

Payton would like to thank all his friends and family for the continued support. A special thanks to MRP-Birel America for their team support, Ariel Castro and AM Engines for the Rotax power and Jesus Vasquez from P1 Engines for the Vortex Mini Rok support and service.