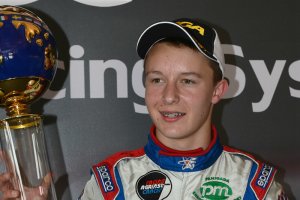 Parker Thompson claimed his second Super Pole trophy at the third round of the WSK Masters Series
(Photo: KSP.fr)

Coming off the huge career achievements of claiming the Super Pole and a top-five result at the third round of the WSK Euro Series, Canadian Parker Thompson continues to take the European karting scene by storm. Back on track to take on the third round of WSK Masters Series this past weekend in Precenicco, Italy, the Energy Corse factory driver was able to claim his second Super Pole win in the KFJ category before disaster would strike in the final event.

With four days spent back in Canada before the event, Thompson was refreshed and ready to tackle the International Circuit Friuli Venezia Giulia with his Energy/TM machine. Fastest from the very first practice session, and even able to stay on top in rainy conditions, Thompson knew he had a chance to repeat and claim the Super Pole trophy. Easily making his way into the Super Pole session, Thompson was able to run a mistake-free lap to claim the top spot by six thousandths of a second.

“Earning the Super Pole again meant a lot to me and my team,” explained Thompson. “It proved to others that we are definitely competitive when it comes to Super Pole. It feels really good to get a back-to-back wins in the Super Pole sessions in WSK competition against the best drivers in the world.”

With some strong competition lined up behind him for the start of the first heat, Thompson defended his line to keep his competitors from attempting a passing maneuver through the first corner. Defending less through turn two, as Thompson hoped for a good run out of the corner, two drivers were able to take advantage and move around the young Canadian. Immediately attacking back, Thompson recovered one of his lost positions and remained there until falling back to third towards the end of the race.

The second heat saw Thompson line up from his heat one finishing position, and was able to slip into second place going into the first corner. Soon falling back to third, the Team Canada pilot drove off track at the end of the lap as a result of pushing too hard on cold tires. Dropping out of the top-ten, Thompson then raced his way back to the sixth place after making clean passes during the remainder of the nine-lap heat.

Starting sixth for the third and final heat, Thompson knew he needed a solid result in order to start near the front of the pack for the all-important prefinal. No easy task starting in sixth on the outside line, the rising talent made a superb start as he advanced to fourth.

“I made a fantastic start on the first corner, advancing to fourth but was disappointed to see the red flag and a total restart,” Thompson noted. “All my hard work was demolished and I would have to try yet again to get another amazing start from sixth position. On the restart I was not so lucky as I was pushed back to eighth. Trying to race my way back to the front I made a mistake calculating a pass, which allowed my fellow competitor to pass me back in the very next corner pushing me off the track. This lost me another five positions. While attempting to come back on the track another driver collided with me as I then fall back to close to last.”

Able to finally finish the heat in the 13th position, Thompson’s heat race results would line him up fifth for his prefinal race. Knowing he could score the win if he raced smart, Thompson was up for the task. Advancing to second on the first lap and then into the lead on the second with a ten kart gap, Thompson had the win in sight. Disaster would strike however, as a large rock broke a hole in his radiator, and the temperature on his engine quickly began to rise. Twenty degrees too high by the start of the third lap, the issue escalated as Thompson’s times began to drop. Losing the lead by the end of lap three, Thompson’s engine continued to worsen, and was near the seizing point by the end of the race. Trying to be easy with the engine and not hit maximum speed on the straights, Thompson was able to salvage a fourth place result.

“By the end of the race the engine was 90 degree Celsius,” added Thompson. “It was a miracle I finished the race let alone a fourth place result. It was too bad this had to happen, as we were very strong at the beginning of the prefinal.”

Starting the final event from the tricky outside row, Thompson fell to seventh on the start. Racing his way back from there, Thompson ended up in the wall as a result of a risky pass by a fellow competitor. Disappointed with his DNF, as Thompson knew he could contend for his first WSK Series win, the Energy Corse driver will be back next round as he continues to impress in his first season in the European karting scene.

For more information on Parker Thompson including partnership opportunities, please visit him online at http://www.ParkerThompsonRacing.com or Parker Thompson Racing on Facebook and Twitter @parkertracing