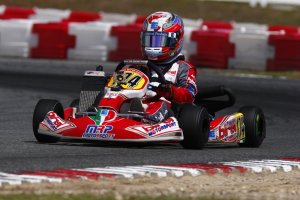 After claiming the 2013 Florida Winter Tour Rotax Mini Max championship title in March, MRP-Birel America pilot Nicholas Brueckner was back in action this past weekend. Taking on the first two rounds of the Texas ProKart Challenge at the Dallas Karting Complex (DKC) in Caddo Mills, Texas, the rising talent would leave with a bevy of impressive results. Contesting both the Rotax Mini Max class as well as the Mini Rok TaG Cadet class, Brueckner would emerge victorious in both and accumulate two pole positions and three main event wins.

The up-and-coming pilot would start off on the right foot, as he claimed the pole position on Saturday morning in the Mini Rok class. Posting a disappointing DNS in the first heat due to a mechanical issue, Brueckner then powered back in heat two, coming from the tail of the field to take the heat race win. Continuing to show his strength and race craft, the Texan then went on to earn his first main event victory of the weekend.

In the Mini Max class on Saturday, Brueckner would post P2 in timed qualifying and then follow that up with a third and second place effort in the two heats. His strong runs would be all for naught however, as yet another mechanical issue plagued the young driver. With his chain popping off early in lap one of Saturday’s main event, Brueckner would be unable to finish and posted a DNF. Also suffering from a strained back on Saturday that was made worse by the higher g-forces and pressures of the Mini Max class, Brueckner was slightly off his game but came back on Sunday feeling much better and with a determined vengeance to improve upon his results.

And Brueckner’s results on Sunday truly speak volumes. Clocking second quick in Mini Rok qualifying, Brueckner would hold station in the one heat race, with the second heat eliminated from all schedules due to time restraints. A dramatic last lap pass on the inside through turn ten in the main saw the MRP-Birel America team driver take the lead and the win, becoming a double winner in the TaG Cadet class.

The rising talent would then go on to complete the day’s sweep in the Mini Max category on Sunday. Earning the pole position, Brueckner used his speed to run away with a three second victory in the one heat race. The final then saw Brueckner lead from green to checkered flag, never relinquishing the lead and winning again by a three second gap over the second place driver.

Nicholas Brueckner would like to thank his tuner and driving coach Tim Lobaugh with MRP Motorsport-Birel America for all of his hard work and support this past weekend, despite pulling double-duty with two karts, and the team at 3G Kart Racing.

Nicholas will be back in action at the third and fourth rounds of the Texas ProKart Challenge when the series resumes May 31-June 2 at the Gulf Coast Kartway in Katy, Texas.