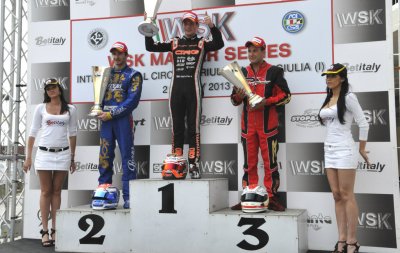 The WSK Master Series leaves Precenicco and makes for the final round. The third and last but one round is over and the WSK Master Series of karting is moving fast towards the final round of the season. In Precenicco (Udine, Italy), on the International Circuit Friuli Venezia Giulia, today’s races assigned the last points for the KZ2, KF, KFJ and 60 Mini standings before the last and decisive round in Castelletto di Branduzzo (Pavia, Italy) on 14th July.

Verstappen wins again in KZ2
Once again, the positions of drivers in KZ2 got overturned: if in yesterday’s Final 1 the winner was the Czech Patrik Hajek (Praga-Parilla-Bridgestone), today’s Final 2 was won by the Dutch Max Verstappen (CRG-TM-Bridgestone), swapping the positions of Saturday’s race with the Czech driver. This time Verstappen did not hesitate and got an early lead, pulling away from Hajek himself. Behind them the Italian Riccardo Negro (DR-TM-Bridgestone), another driver battling for the final victory. Negro arrived third, just after the Verstappen, winner with a remarkable lead over the runner-up, Hajek.

Boccolacci fights and wins in KF
Dorian Boccolacci (Energy-TM-Vega) keeps the French flag high on the podium. In today’s KF Final, the driver from Provence had to beat into second position the Canadian Lance Stroll (Zanardi-Parilla-Vega), the winner of the Pre-final. Stroll tried to gain an early lead in the Final too, but Boccolacci closed the gap in few laps and pulled away fast. In the end, the French driver had such a lead that he was able to keep at bay the new pursuers that were slowly approaching him. In fact, the British Ben Barnicoat and Ben Hanley (both on ART GP-TM-Vega), after passing Stroll, managed to keep a quick pace behind the leader, but they were no match for him: Boccolacci won and he is now the favourite for the season victory. Stroll would end up finishing fifth.

Lorandi back to victory lane in KFJ
After a weekend heavily conditioned by an issue during qualifying which obliged him to recover, the Italian Alessio Lorandi (Tony Kart-Parilla-Vega) crowned his recovery winning the KFJ Final. His most dangerous rival was the British Daniel Ticktum (FA Kart-Vortex-Vega): he won in the heats and in the Pre-final but, eventually, had to give in when the driver of Baby Race took over leadership in the Final and beat him into second place. On the other hand, a very good start allowed the Russian Robert Shwartzman (Tony Kart-TM-Vega) to place third. The Italian Lorenzo Travisanutto (Tony Kart-Vortex-Vega) from Pordenone, put in a remarkable performance, recovering 20 positions and finishing seventh. Canadian Parker Thompson (Energy-TM-Vega) earned another Super Pole trophy and was classified fifth after the heat races. A fourth place run in the Prefinal put him in position for a chance at the podium but contact on lap four put him into the wall and out of the race a few laps later. American Logan Sargeant (Tony Kart-Vortex-Vega) finished 14th with Canadian Kami Moreira-Laliberte (Zanardi-Parilla-Vega) in 23rd.

Martinez confirms his leadership in the 60 Mini
The Spanish Eliseo Martinez (Hero-LKE-Le Cont) finishes this round of Precenicco unbeaten. He dominated in the Final too and the race had the same podium of the Pre-final: second was the Greek Kostantinos (Hero-LKE-LeCont), third the Malaysian Muizz Abdul Gafar (Hero-LKE-LeCont). They were no match for the leader, despite Konstantinos had managed to get close to Martinez in the final phase of the race and finished right behind him.

All the weekend of Precenicco on RaiSport 2. The usual special report by RaiSport 2 wil close, on next Friday, the remarkable media coverage promoted by WSK, which produced all the live broadcast available on http://www.wsk.it The WSK TV Magazine is on at 23.55 on Friday 10th May.