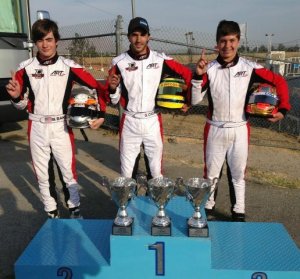 Adams Motorsports Park is one of the oldest karting facilities in the world and this past weekend it played host to the 3rd round of the SKUSA ProKart Challenge series. Having record numbers at the first two events of the championship, the series has grown into one of the toughest touring series in the country. ART Grand Prix America has had a strong start to the season collecting a victory at each of the first two races and seven drivers were entered under the team banner with all of them looking to master the very difficult and technical circuit.

Four drivers would contest the TAG Junior category with team regulars Brenden Baker, Phillippe Denes, and Chase McDaniel joined by team newcomer Aaron Aguirre, who would be making his first ever PKC start. Friday practice were all unofficial sessions, but the pace was very impressive by all of the drivers, with each of them running solid lap times and running through the program with very few issues. Qualifying on Saturday would prove to be a bit of a disappointment for the team with Baker ending up 4th, McDaniel 10th, Aguirre 11th, and Denes 13th in the 19 kart field. Traffic on driver’s hot laps and a few incidents on track caused the qualifying issues, but everyone was confident the race pace would see all the young drivers climb through the field. Entering the first heat, each driver had developed their strategy to tackle the rest of the day, but unfortunately turn 1 on the opening lap threw them out the window for both McDaniel and Aguirre as they were both crashed out and done for the heat. Denes had a fantastic start and was able to climb all the way to 7th running some very strong laps. Baker fell back to 5th at the start and had battled all the way to the lead before a last lap incident dropped him back to 2nd at the finish. The second heat would prove much better for the team as McDaniel rebounded to move back up to 11th place, while Aguirre climbed all the way back to 8th and set fast lap in the race, a very impressive drive for the young newcomer. Denes battled a carburetion issue which dropped him back to 10th and Baker drove another superb race to come across the finish line with the win. Unfortunately, a penalty was assessed that dropped him down to 3rd for the beginning of the Final. Looking to get back to the top of the podium in the Junior category, final set up changes were made and the 20 lap main would be a battle from the start. McDaniel was on a tear in the main driving through the field and looking poised to secure his first top 5 at PKC, when an unfortunate racing incident took place with another competitor that knocked him out of the final. While the result still hasn’t shown up, McDaniel is showing great speed and it’s only a matter of time before he earns the finish he deserves. Making the necessary changes to Denes’ kart, the young Monterey driver was also driving through the field making it all the way back to 5th before a large pile up left him with nowhere to go knocking him back to 12th in the final results. Baker and Aguirre, though, were not to be denied from showing their outright speed. Baker was able to get to the lead quickly and battled with a group of drivers in a fantastic race for the win. Aguirre cleared the mid pack and ran down the leaders turning in fast lap after fast lap. With 3 laps to go a competitor made an attempt to pass Baker for the lead, but instead contact was made. This dropped Baker and the rest of the pack back over a second from the leader. Baker, the fourteen year old PKC opening round winner, put his head down and was able to turn in his fastest laps to make a pass for the lead and ultimately the win on the final lap. Aguirre ended up settling for 4th, overheating the tires in his charge to the lead pack, but once again ended the race with fast lap. A win and a 4th with the two fastest laps prove once again just how strong the team’s junior program has developed.

After dominating Willow Springs at Round 2, Gianfranco Casadei looked to back up his performance with another victory in the S3 shifter division. Casadei paced the class all day Friday and ended Saturday’s qualifying session with pole by over 2 seconds. Casadei ran controlled and smooth races for the rest of the afternoon to easily win his second race in a row in the class. Proving to be a very quick learner, it won’t be long before the novice shifter driver is battling at the front of the S2 category.

Entering TAG Masters was team driver Steve Wiener. The veteran from Chula Vista, CA has battled tough luck all season, but progress has been made speed wise at each event. Qualifying and Heat 1 would see Wiener in 10th out of 14 competitors and with each session getting a half second faster. A spin early on in the second heat would drop him to the back of the grid for the final. The Masters category is always one that sees a lot of attrition and this day would prove no different. After a number of passes coming back through the field and an array of drivers falling out of the race, Wiener would find himself up to 5th with only a few laps remaining. With the podium position right in front of him and time running out, Wiener went for a pass for 4th, but came up a little short and had to spin to avoid contact with the competitor, relegating him back to 7th at the finish. All in all though, still the best race of the year for Wiener, and the results keep on improving each and every weekend.

The headline category of the weekend, TAG Senior, would see one of the top drivers in the country make the switch to the ART Grand Prix chassis. Jake Craig, winner of Round 2 at Willow Springs, made the switch after testing with the team the week prior and quickly showed how fantastic the product is. Pacing unofficial practice on Friday, Craig would qualify 2nd, the top Rotax driver on a track that definitely preferred the Leopard engines. Coming in 3rd in both of the heats, Craig was able to get to the lead after the first lap when contact was made between the two leaders. Craig, the 15 year old from Mission Viejo, went on to lead the rest of the race, set fast lap by over 2 tenths, and win by a margin of more than 3.5 seconds. It was a remarkable drive by Craig that saw the team make no changes throughout the entire weekend and marked the 3rd straight victory in TAG Senior including the SKUSA Pro Tour weekend sweep last month.

The team will now return to action at the Tri-C and LAKC club events at Calspeed in Fontana, CA and begin preparing for the next PKC round back at Willow Springs.