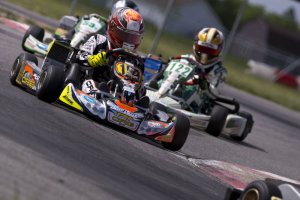 After making the switch to the potent Team PSL Karting before the final round of the Florida Winter Tour, rising karting star Parker Chase was able to take the Saturday victory in the Rotax Mini Max class this past weekend at the Dallas Karting Complex (DKC). Taking on the first rounds of the Texas Pro Kart Challenge in Caddo Mills, Texas, Chase put his PSL Karting/CRG chassis in place for the win and topped the podium during Saturday’s events making the “move of the weekend.” Chase also earned a third place podium result on Sunday to complete a stellar weekend of racing.

Saturday’s round one action saw the New Braunfels, Texas resident clock fifth quick in qualifying to start off his Texas Pro Kart Challenge effort. Two heat races would then ensue, with Chase scoring second and fourth place finishes in the wheel-to-wheel action. Making smart decisions in the day’s main event, Chase emerged victorious with his 0.701 second win in his bid to claim a ticket to the Rotax Max Challenge Grand Finals (RMCGF) later this year. Awarded the “move of the weekend” for his calculated pass in the last corner of the last lap, Chase waited until the ideal time as he drove from third to first to score the victory and earn max points in his championship chase. Chase now looks to continue to challenge for race wins and podiums in the competitive Rotax Mini Max category as he has his sights set on competing in the invitation only event on the world stage later this year at the RMCGF.

Back on track Sunday, Chase would put his PSL/CRG #199 entry on the podium once again, this time with a third place podium result for the day’s main event. Also of note, Chase and his friends contested the Friday night Team Endurance Race and emerged victorious during the opening festivities of the weekend.

Chase will next be on track for the third and fourth rounds of the Texas Pro Kart Challenge, May 31-June 2 at Gulf Coast Kartway in Katy, Texas.