Numbers Continue to Grow at Round Three of LAKC

The 2013 karting season in Southern California is rolling along with exciting numbers of racers at each round, and even more exciting racing as the Los Angeles Karting Championship (LAKC) held its third round of the season. Karters returned to the CalSpeed Karting complex that allows for multiple configurations. This round, they raced on the Nuovo layout, which features long sweeping corners and plenty of fast and exciting racing on April 28. 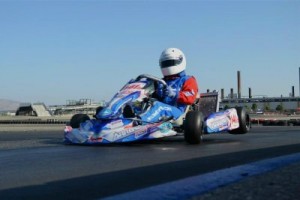 Racers filed in through the gates and ready to race on a beautiful sunny California afternoon. First up on track was the DR Racing Kart USA Junior 1 Comer class. Twenty-three karts came to the grid in Junior 1 at round two, and that number did not change for round three. Ryan Schartau, who dominated the previous round, picked up right where he left off in March. Schartau picked up the pole and the pre final win. In the main, Schartau was challenged by fellow front row starter, Trey Brown. Brown passed Schartau for the lead on lap seven and maintained the lead for three laps. Schartau took the lead back for the next three laps before Brown would mount a charge with two laps to go. Schartau held Brown off for the main event win, his second of the season. Brown crossed the line right behind Schartau for second place. Joseph Daniele rounded out the podium while Johnny Dresser, and Colin Queen rounded out the top five.

Next on the track were the combined classes of the Acceleration Kart Racing S4 Magnum class, and the TM Racing USA Open Shifter class. In the S4 Magnum category, March main event winner Steve Donia was unable to make the trip to CalSpeed this time around, leaving the door open for Rick McAllister and the rest of the S4 Magnum racers. McAlister secured the pole and the pre-final win in the class, but in the main event when it mattered for the championship chase, Sal Menudiado showed up. Menudiado won the main event, and cut Donia’s lead to only one point. Finishing behind Menudiado was Kevin Gilroy in second with McAllister in third. Jeff Horne and Ken Manning rounded out the top five. Just as in the S4 Magnum class, the point leader in the TM Racing USA Open Shifter class. The points leader Brian Shafer, a professional driving instructor, had to work and did not make the April race. Slava Prikhodko had a perfect day, after winning the pole, pre-final and main. Behind Prikhodko was Alex King and Rob Whitley rounding out the podium, with Tim Wyatt and Chris Curtis making up the top five.

The third class of the day was the PureKarting.com Comer Kid Karts, sharing the track with the HPD Honda Kid Karts. In Comer Kid Kart, the pole and pre-final was won by Dominic Gorden. The main even saw a race between Gorden and Cole Kieth in the early stages. The close racing between the two allowed Rylee Martinez, who had been lurking in third place, to slip by the two leaders and assume the point. After holding off a charge from Gorden, Martinez earned the main event win followed by Gorden in second, Kieth in third, Aden Dodge in fourth and Jake Daniele in fifth place. The HPD Honda Kid Kart class saw a different drive up front each session. Jaden Goetz took the pole after edging Ian Dodge out by only seven one thousandths of a second. Dodge pulled out the win in the pre-final, and in the main Kasey Gillis took the win ahead of Jaden Goetz and Maxi Saga. The win gave Gillis a one point lead over Goetz in the points. Skyler Geczi and Noah Warren rounded out the top five. 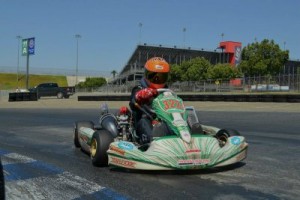 In the 2WildKarting S2 Semi-Pro Stock Moto class, Billy Musgrave continued his reign over the world of SoCal shifter kart racing. Musgrave had another perfect weekend including setting what is believed to be a track record on the Nuovo circuit after laying down a 45.23 in qualifying. While Musgrave, who was coming off a wildly successful run at the 2013 Superkarts! USA SpringNationals earlier in April, dominated up front as a good race was had in both the pre-final and the main for second place. Chandler Campbell finished the pre-final ahead of Augie Lerch earning the second place on the starting grid for the main. After a poor start in the main, Campbell fell from second to fourth as Bobby Legate got around Campbell and Lerch for P2. Late in the race however, Lerch made a move on Legate for second place and brought Campbell with him. Musgrave would win the race, with Lerch in second and Campbell completing her first shifter main event with a podium finish. Bobby Legate and Gianfranco Casadei completed the top five. On the track with S2 was the MRC sponsored S4 Stock Moto Masters class. After sustaining a back injury just before first practice, point leader Willy Musgrave would not be in the kart at all on Sunday. Troy Butts was the first to step up in Musgrave’s absence in qualifying. Butts secured the pole over Erik Jackson. The pre-final saw Jackson get around Butts for the win and a clean run to the main event victory. Despite pressure from Butts, Jackson led every lap of the main event for the win. Butts came home second with Jason Chott completing the podium. Antonio Cianciardo and Ron Rossetti finished fourth and fifth. Jackson is the father of Campbell in S2 and it was great to see a father daughter team do so well.

Buddy Rice Karting TaG Senior saw Alejandro Fernandez have a perfect weekend. Securing the pole, pre-final win and main event victory ensured Fernandez an easy day, behind him the whole day was championship point contender Carlee Taylor. After running upfront amongst the leaders in the main event, Taylor was scored with a dead last finishing position with an unfortunate DQ due oil seepage on her clutch. John Wallace III would be classified in second with Cory Davison third, Pasha Mirhadi and Carie Homan rounding out the top five. The perfect day was certainly a boost for Fernandez the win still only gave him a two point lead over second place driver Carlee Taylor in the points, proving how close the racing has been this year. As the sole entry in the PSLSoCal.com Rotax Senior class, Andrew Wilson swept the day. 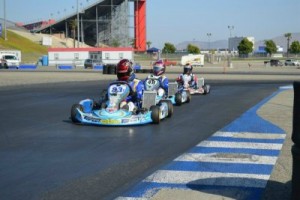 On the track next was the Fleming Racing Engines KPV-1 class. Ryan Schartau was on his way to a perfect weekend, after picking up the pole and pre-final win, but in the main event Schartau fell short to Dante Yu. Yu ran behind Schartau and Trey Brown at the start, lap seven Yu got around Brown and set his sights on Schartau. Yu would cut it close, getting to Scahtau and passing him with less than two laps to go. Yu would hold on for the win with Schartau and Brown below him on the podium. Dakota Tate and Julian Busick completed the top five. In the Hyper Racing Engines PRD Junior 1 class, Myles Farhan had a perfect race day, going P1 in all sessions. Gary Lyles finished the main behind Farhan with Mark Polunin in third and Johnny Dressler coming home fourth.

Mike Manning Karting PRD Pilot category welcomed 11 drivers to the field, improving on round two numbers. Logan Calvin was on his game all day, sweeping the event. Calvin led all 10 laps of the pre-final, going flag-to-flag in the 15-lap main event. The fight was for second as Karlee Polon nipped Eric Laifman at the line for the runner-up position. Stephen Barthelmass and John Barthelmass completed the top-five. The Valley Trophy Rotax Senior Pilot division saw Garrett Gaska cross the first. Gaska was the top qualifying, edging out round two winner Elric Navatel. The pre-final win was earned by Navatel, as he was able to match the pace in the heat race. In the feature, it was Gaska that held the edge and scored the victory over the current championship leader.

For the second time during round three Ryan Schartau had the opportunity to sweep a race after securing the pole and pre-final win as he competed in the OTK USA TaG Cadet class Sunday. But for the second time that day, Schartau would dominate early, and fall in the main. Schartau did go on to win the pole as well as the pre-final, and was leading the final until lap 12, when he fell out of the race. Jagger Jones inherited the lead and won the race. Joseph Daniele finished second. Myles Farhan drove up from a tenth place start to notch a third place podium finish, while Hayden Wagner and Jace Jones rounded out the top five.

Roy Steele secured a clean sweep in the Bridgestone Rotax Grand Masters category. Steele was at the front of the field all day, as he outran round two winner Michael Middleton and Kanji Takagi. John Bush appeared to have things locked away in the Phil Giebler Racing PRD Grand Masters division. After scoring the pole position and pre-final win, Bush had to battle in the final. Round one winner Paul Bonilla was the early class leader, before Bush regained the lead. As the 15-lap event wore on, Ron Rossetti continued to reel in Bush. Once into second with two laps to go, Rossetti sealed the deal with a last lap maneuver to earn the victory. Bush had to settle for second with Ralph Bush third, Bonilla fourth and Steve Hansen fifth. 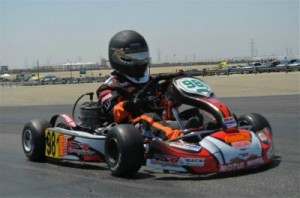 The Empire Karts KPV-2 and the Mack Motorsports PRD Junior 2 fields were separated for their main events. In KPV-2, Andrew Murowatz won for a second straight month, pulling out to a 13-second advantage over Jonathan Eshom. Alec Karas was third with Josh Early fourth and Bryce Murphy fifth. A great battle went down to the wire in PRD as Nick Ramirez edged out Willy Axton and Skylar Estrada. Axton was the leader during much of the second half until Ramirez took over as they took the white flag, getting to the checkered flag first by a slim two tenths. Noah Garza and Zach Arthur completed the top-five.

Entries expanded to 25 drivers in the RLV / PRD USA Senior category for the April event, all chasing Lloyd Mack at the checkered flag. Eric Molinatti was the top qualifying by scant 0.010-seconds over Alejandro Fernandez with round two winner Paul Bonilla right there. The top three remained out front in the pre-final, as Fernandez took the win over Molinatti. The battled continued in the final until Fernandez retired on lap seven with ignition problems, allowing Mack to join the battle up front. Molinatti led the field the rest of the way, crossing the line first ahead of Bonilla. Officials however penalized both two positions for an infraction, putting the top two down the order. That moved Mack to the top step of the podium and the championship chase. Brandon Reed was classified second ahead of Molinatti and Bonilla with David Vasquez in fifth.

The fourth round of the Los Angeles Karting Championship is set for the May 19 weekend at the CalSpeed Karting facility in Fontana, California. For more information, be sure to visit http://www.lakc.org today and follow them on Facebook/lakc.org for race day photos and up-to-date information.