Driver News: Dylan Tavella Ends Busy April and Looks Towards the Rest of the 2013 Season 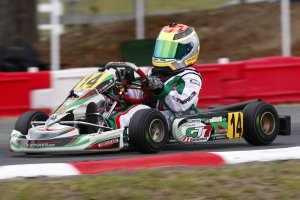 After wrapping up the Florida Winter Tour, Dylan Tavella has been on a tear at events at the Mooresville Motorplex facility in North Carolina
(Photo: DylanTavella.com)

With the annual Florida Winter Tour ending in March and the cold winter months finally breaking in his home state of New York, up and coming superstar Dylan Tavella would head south for some wheel-to-wheel action. With several national events held at the new Mooresville Motorplex (MMX) facility in Mooresville, North Carolina, Tavella would see action on three separate occasions at the new facility, as he would compete in some regional karting events as a tune up for his national campaign.

Competing this past weekend at the debut of the United States Pro Kart Series (USPKS), Tavella would step behind the wheel of a Yamaha powered Tony Kart, his first attempt in the Yamaha Cadet division. Looking to attain success early, Tavella was quick out of the blocks and was instantly one of the quickest drivers on track.

Showing his speed on Saturday morning, Tavella would take the premiere pole position in the Yamaha Cadet category and write his name in the record books. Continuing his march at the front of the field, Tavella claimed the victory in heat one and then again in heat two, garnering the pole position for the main event. Looking to sweep the day’s festivities, it would be all for not for the New York resident as contact would relegate him down the running order. Battling hard to work his way forward, Tavella would cross the stripe in the third position and celebrate on the podium later that evening.

Back to the same MMX facility on Sunday, rain would greet the racers and Tavella would look to gain experience in wet weather competition. Starting the day off strong with a second place qualifying effort, fifth and eighth place finishes in the heat races would set him up for a top ten starting spot in the main event. Ending the day in ninth, Tavella will look to rebound at his next on track event in a few weeks time.

The weekend prior, April 20-21, Tavella would travel to the same North Carolina facility to test for upcoming events as he took on the MMX Karting Challenge club series. Looking to get up to speed as well as familiarize himself with the track for his first ever visit there, Tavella would flex his muscles and consistently run at the front of the field. Completing the day’s sweep for Saturday’s event with the pole position, prefinal win and final victory, the young gun was the driver to beat in the Rotax Micro Max division. Doubling up on Sunday with yet another sweep of the day, Tavella and crew are confident they can be on top of their game for upcoming events.

For more information on Dylan Tavella including news, profile, media and contact information, please visit him online at http://www.DylanTavella.com