Drivers climb the running order all weekend in Tucson, Arizona 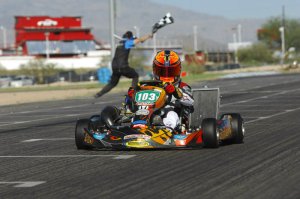 Champion Racing stable out of Norman, Oklahoma has taken on the task of reintroducing the Intrepid chassis brand to the forefront of karting in North America. During the April 12-14 weekend, Champion Racing competed in the 2013 Superkarts! USA SpringNationals at the Musselman Honda Circuit in Tucson Arizona. The team saw great results in Intrepids return to SKUSA competition under the Champion Racing banner, and both the shifter and TaG programs had a successful ‘welcome back’ party to SKUSA racing. The driver roster included six racing aboard the new version of the Intrepid brand, highlighted by the first Pro Tour victory for S5 Junior Stock Moto driver Jarred Campbell and a double podium return for S2 Semi-Pro Stock Moto driver Ryan Kinnear.

The Stock Honda Junior S5 class had two Intrepid drivers in the field at the SpringNationals. Campbell had a successful weekend, after putting his Intrepid second on the grid for the first heat race after qualifying. Campbell stayed in the top three all day Saturday, and finished the main event in an impressive runner-up position after an early back and forth battle. Jesse Woodyard riding a strong wave off his two main event wins last month at the Lone Star Grand Prix. Woodyard had a calm day on Saturday. Qualifying 10th, Woodyard moved up to sixth in the first heat race. The second heat saw Woodyard move back to 10th. He would maintain that spot through the main event and come home in 10th place.

Sunday, Campbell used lessons learned from following the winner the day before to mount a charge for the win. After qualifying fourth, Campbell moved to third on the opening lap, and then proceeded to P2 on the second lap, where he would finish the first heat. Campbell went on to take the lead away on the opening lap of heat two and set the pace every lap after that. The main was no different as Campbell went wire-to-wire to score his first Pro Tour victory ever, and help put Intrepid back on the map once again. Woodyard struggled to break out into the top-10 again on Sunday. Woodyard gained two spots on the track to finish ninth in the first heat race, where as the second heat saw him fall back to 11th. He ended up one spot farther back at the end of the main event to finish 12th, learning of an internal engine issue not found trackside after returning home. 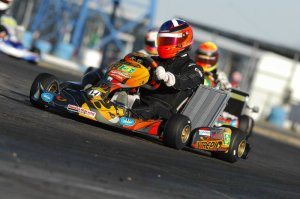 In S2 Semi-Pro Stock Moto, the trio of Intrepid drivers improved every time they hit the track. Kinnear led the way qualifying 14th, S2 rookie Micah Hendricks qualified 20th in his debut, and Tyler Fling sat 31st on the time sheet when the session ended to begin round one. In the first heat race, Kinnear improved three positions to finish the race in 11th, Hendricks climbed all the way up to 13th, with Fling improving four spots up to 27th. The second heat saw even more advancement toward the front of the field. Kinnear worked up to a solid top ten after finishing sixth, Hendricks had a great start that saw him climb all the way up to ninth, however he was shuffled to the back on lap six and finished 16th. Fling gained another four spots and finished the second heat in 23rd. In the main event, Kinnear had a 20 lap race for the last two spots on the podium. After an exciting back and forth, Kinnear finished the main event with a very well earned third place. Hendricks demonstrated strong race craft as he picked drivers off in the main, coming home with an 11th place as Fling earned a solid top-20.

Sunday was an up and down day for the Intrepid S2 roster. Kinnear was the positive for the Intrepid brand, beginning with a strong day after qualifying third, leading the first lap of the opening lap of the first heat race and running in the top ten all day. Kinnear started the main event in sixth and fought his way forward to a very strong runner-up finish, improving one spot from his result on Saturday. Hendricks began Sunday 15th on the time sheets but a penalty dropped him down to outside the top-30 in heat one. He came back to finish 23rd in the second heat, and back it up with a stellar drive forward. With a solid start off the line and gaining five positions in the closing laps, Hendricks was an impressive seventh at the checkered flag. Fling’s trend of moving up continued Sunday as he gained ten full positions throughout the heats and the main, ending his weekend with a 22nd place finish.

Gary Butler carried the Intrepid flag in the TaG Masters class. After a rough day through qualifying and the two heat races on Saturday, Butler drove a masterful race in the 20-lap main event as he gained 10 spots to finish in the 13th position. Sunday once again saw Butler drive from the back as he gained 10 spots in the second heat race to finish 16th, picking up two more spots in the main event for a 14th place effort. 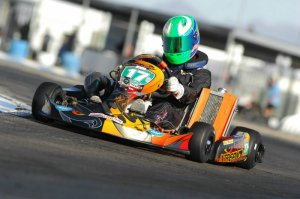 The Intrepid/Champion Racing hauler will be at the SKUSA Pro Tour SummerNationals in Grand Junction, Colorado on July 19-21. During the summer, Champion will support Intrepid racers in the Texas ProKart Challenge program, set to open at the Dallas Karting Complex in Caddo Mills, Texas on May 3-5.

Intrepid is once again winning on the world-wide stage, as Bas Lammers scored victory at the recent WSK Euro Series in International Circuit Napoli in Sarno, Italy. The brand is rebuilding step-by-step, and Champion Racing is ready to expand the Intrepid name across tracks throughout North America. To learn more about the new Intrepid kart models, or becoming part of the Champion Racing dealer network, contact them at 405-579-5278 or visit http://www.championkart.com today.

About Champion Racing:
Champion Racing, located in Norman, Oklahoma alongside the Oklahoma Motorsports Complex, has a long history as one of the most respected shops and teams in the sport. The North American importer of the Intrepid kart line runs a national-level arrive-and-drive racing team. Champion Racing is also well-known for their engine building performance. In both 2006 and 2007, the team won the prestigious eKartingNews.com Team of the Year Award.