Driver News: Dominic Tesoro Makes Switch to CRG and Will Run Under the PSL Karting Banner

2013 season looks to be a busy one for Tesoro 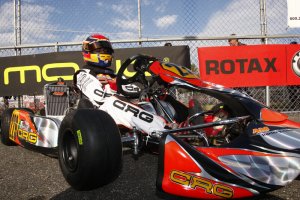 Dominic Tesoro will be a busy man over the next few weeks
(Photo: DominicTesoro.com)

Making the switch to the CRG brand and competing under the PSL Karting tent for the final round of the Florida Winter Tour (FWT), Floridian pilot Dominic Tesoro is set to embark on a busy 2013 racing season. Making the switch as part of the PSL Karting Driver Development Program, Tesoro will compete both regionally and nationally for the remainder of the season as he looks to attain a ticket to the Rotax Max Challenge Grand Finals in New Orleans in November.

Starting at the Florida Winter Tour in late March, Tesoro would look to utilize the event to get used to the CRG product line. Different from his previous chassis in regards to setup and handling, Tesoro was up to speed early and would claim a pair of top ten results by the end of the weekend. Heading to South Florida in mid-April, Tesoro would compete at the second round of the Florida Karting Championship Series (FKCS) and Rok Cup USA program.

Continuing to learn the chassis on the Homestead permanent parking lot facility, Tesoro greatly improved throughout the weekend. Qualifying fifth for Saturday’s wheel-to-wheel action, Tesoro would turn his inside row three starting spot to a second place result. Sunday would see the new CRG driver narrowly miss the pole position with his second place qualifying effort and then claim his second podium result of the weekend crossing the stripe in third.

“I absolutely love the new CRG PSL 28,” explained Dominic Tesoro. “The kart responds very well to change and adapts in all conditions whether wet or dry. I am very happy with the overall package and look forward to more podium results and race wins under the PSL banner.”

With a busy schedule of events planned for May, Tesoro will travel up and down the east coast hunting for solid results. Starting with the third round of the FKCS program in Fort Myers, Florida next weekend, Tesoro will travel to the Mooresville Motorplex in Mooresville, North Carolina for a club race. Tesoro will utilize the local event to familiarize himself with the circuit in preparation for the United States Rotax Grand Nationals that will be held at the same facility in early August. With very little time off, Tesoro will continue his travel north to the New Castle Motorsports Park facility for the third round of the World Karting Association Manufacturers Cup and then back to North Carolina for the TaG money race at Mooresville.

“Dominic’s progress on the CRG/PSL 28 seems very natural, adapting to the chassis within only a few sessions,” explained PSL Karting USA’s Andrew Campbell. “At the moment, I am quite looking forward to the results he can claim while making this his final year in Junior. We believe with the right support and direction, Tesoro will have a good chance claiming a Rotax Grand Finals ticket.”

Tesoro will be a busy driver in the next month but it does not stop there. With plans to compete at the Rotax Summer Shootout, Rotax Grand Nationals and Rotax Pan American Championships, the talented pilot will be chasing an invitation to the Rotax Max Challenge Grand Finals that will be held for the first time ever in the United States this November.

Dominic Tesoro would like to thank all of his supporters for a successful start to the 2013 season. A special thanks to the powerhouse PSL Karting team and their staff of Andrew, Stephane and Dominic.Tesoro would also like to thank his mom and dad, Tony and Kristie Tesoro and Lady Luck. For more information on Dominic Tesoro and to inquire about sponsorship opportunities available, contact Tony Tesoro at 813.707.4512 or visit his website http://www.DominicTesoro.com