Morgado takes top honours in DD2 Masters, with Scott Campbell joining him on the championship podium 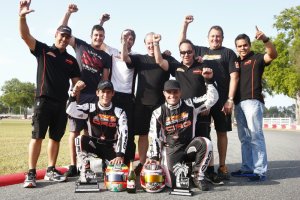 Heading into the Formula Kart Productions Florida Winter Tour (FWT) series finale with championship titles and Rotax Max Challenge Grand Finals (RMCGF) invites on the line, Team PSL Karting would leave successful in the Rotax DD2 Masters category. Staking claim to the overall title and two RMCGF tickets, Team PSL Karting continued to prove their prowess as one of North America’s leading karting operations. A full team roster of 13 talented drivers contested the final weekend at the Ocala Gran Prix circuit in Ocala, Florida, and put PSL/CRG at the front of the pack in nearly every class.

“It was definitely a competitive season for PSL,” explained Dominic Labrecque, PSL Karting Team Principal. “The addition of many European drivers certainly added a new edge to this already exciting series (FWT). It encourages that everyone bring their A-game each and every weekend.”

Entering the Ocala rounds with four previous prefinal and final wins to his credit, Cristiano Morgado was the driver to beat for the overall Rotax DD2 Masters title. Hot on his heels however was PSL teammate Scott Campbell, as the two were one-two in the points heading into the weekend finale. Campbell used his pole position to end Morgado’s streak in the Saturday prefinal, as the Karting Canada pilot took the win with Morgado, a three-time RMCGF World Champion, in third. Campbell edged out his teammate again the final, taking second place honours as Morgado crossed the stripe in third.

Despite his efforts, Campbell did not have enough to take over Morgado in the points race. With the championship locked up for Morgado, both drivers passed on Sunday’s racing action as the 2013 FWT awarded not one, but two tickets to the RMCGF as Campbell staked his claim to the vice-championship title. Morgado will be gunning for his fourth world title in New Orleans, while Campbell will make an unprecedented tenth appearance at the Grand Finals.

Two remaining PSL drivers in the DD2 Masters class also excelled in Ocala. Reigning FWT DD2 Masters champ Alan Rudolph made a one-off appearance running under the support of PSL Atlantic and came home with the Sunday victory after a wet race. Andres Fonseca made it two PSL branded drivers on the Sunday podium, taking third place honours and finishing the overall championship in fourth.

“There is absolutely no doubt that the CRG/DD2 product is the best on the market,” added Andrew Campbell, Team Manager. “With two class-act drivers like Morgado and Campbell, it was going to be a close season for these veterans. PSL is proud of our 1-2 finish in his very competitive category.”

After having contested the Rotax Senior division the first two weekends of the FWT, PSL Atlantic supported driver Fritz Leesmann switched to the DD2 class for the Ocala finale. Battling a deeply talented field as well as torrential rains, Leesmann was able to podium on Sunday with his second place effort in the day’s final after placing fifth on Saturday. Alessando Bizzotto and Collin Daley also finished their 2013 FWT campaigns with solid results over both days.

In a burgeoning Rotax Junior program, Team PSL Karting pilots continued to post solid efforts in the highly contested class. New PSL recruit Dominic Tesoro led the way in qualifying for the team, placing sixth for Saturday’s round. The rising talent went on to post two top-ten results in the finals, earning tenth on Saturday and bettering to eighth for Sunday. Austin Versteeg recovered from a disappointing DNF on Saturday to power to a fifth place final result on Sunday to end his FWT campaign. Running a one-off event, Canadian Christophe Paquat earned a top-15 result on Sunday in a solid effort in Ocala. Completing the PSL roster was yet another new member, as Parker Chase make the switch to the PSL/CRG Mini Max package for the finale and made a strong debut with a 13th place finish on Sunday.

“With the series coming to an end, many drivers chose not to compete as their chance at the championship may not be attainable, but it did open the door for our newest recruits, Parker Chase and Dominic Tesoro,” added Campbell. “Considering their lack of experience on the CRG product, they were able to find speed immediately.”

Team PSL Karting will now turn their focus to the upcoming Canadian karting season, which begins in May with the first round of the Coupe du Quebec series followed by the Eastern Canadian Karting Championship season opener June 1-2 at Mosport International Karting.