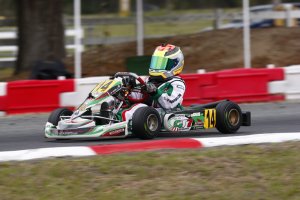 Completing his first series of the 2013 karting season, Dylan Tavella continued to post some impressive results during the finale rounds of the Formula Kart Productions Florida Winter Tour (FWT). Taking on the tight and twisty Ocala Gran Prix facility in Ocala, Florida for back-to-back weekends in both the TaG Cadet and Rotax Micro Max categories, Tavella has laid the foundation for what is sure to be a successful rest of the year.

Hitting the track for the first weekend of competition, Tavella would continue to show speed in his GT7 Motorsports/Tony Kart entry in the Vortex TaG Cadet class. Qualifying just 0.022 seconds shy of the pole time in the third place for Saturday’s competition, the Brookville, New York resident placed fourth and fifth in the subsequent two heat races. When the dust had finally settled during the always-racy finals, Tavella finished his day with a solid top-ten result with his seventh place finish.

Back on track Sunday for the final round of the TaG Cadet weekend, Tavella would clock sixth quick in qualifying before posting results of seventh and tenth in the two heats. Bettering his final race result from Saturday by one position, Tavella’s sixth place finish added to his total championship points haul where the young gun would place fourth in the final tally.

Returning to the Ocala facility for the second consecutive weekend, Tavella would make the switch to Rotax competition as he continues to excel in the Micro Max division. With both qualifying sessions on deck Friday for the weekend’s wheel-to-wheel action, the 2012 Pan American champion clocked an impressive second quick in the first session in a tight group of drivers, which set the grid for Sunday’s event, and then sixth for Saturday.

Taking on a 32-kart-strong field for the first racing action of the weekend on Saturday, Tavella would post the fastest lap in the prefinal en route to a fifth place result before falling back slightly to finish eighth in the final. Sunday’s prefinal saw Tavella take the win in dramatic style, as a four-kart battle ended with the GT7 Motorsports pilot on top. A wet final then ensued as a rainstorm created slick conditions for the finale in the Micro Max class, where Tavella would end his 2013 FWT campaign with a solid sixth place result. Added together, Tavella’s effort would earn him a place on the championship podium, as the rising star earned third place honors in the overall point standings.

The GT7 Motorsports Team is proud to be a Tony Kart dealer, Vortex and a Rotax Max Service Center for the US North East. For more information on Dylan Tavella please check out his website at http://www.DylanTavella.com . For more information GT7 Motorsports please visit their website http://www.GT7motorsports.com or contact Anthony Gangi Sr. at 516-635-8594 or email at agangi@mac.com