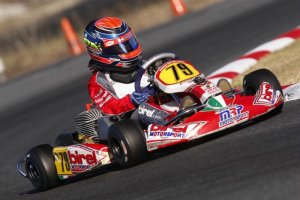 David Malukas at speed on his MRP Birel at Ocala FWT
(Photo: DavidMalukas.com)

An up-and-down Florida Winter Tour season ended on an extreme high note for David Malukas this past weekend at Ocala Gran Prix, where on Saturday Malukas completed a sweep of the Mini Max program to net his first-ever feature win in Rotax competition.

Malukas, driving an Iron Rock Motorsports-powered MRP Birel, timed on the pole in Friday’s qualifying sessions for both Saturday and Sunday’s Mini Max programs. The David Malukas Racing team entered Saturday’s competition with nothing but a feature win on their mind.

David opened the day by wheeling his HMD Trucking sponsored entry to the win in the Mini Max prefinal, which included an exciting finish when dirt was kicked onto the track in the final corner and several of the lead drivers, including David, nearly lost control of their karts while wheeling through the soiled track surface.

After the prefinal, Malukas fans knew that David had the inside shot at his first Rotax win. Starting on the pole for the 18-lap final, Malukas proceeded to lead every lap of the main event and cross the stripe a handful of kart-lengths in front of his MRP Birel teammate, Nicholas Brueckner.

David ended the season a very respectable fourth place in final FWT Mini Max point standings. He finished seventh overall in FWT Formula Kart TaG Cadet, which runs each weekend prior to the FWT Rotax round.

“Last year we did really good in WKA and this year we definitely wanted to prove we could run up front at the Florida Winter Tour,” David commented. “We had some good runs and almost won at Palm Beach earlier in the season. We would have felt like something was missing if we didn’t win a race in Florida this winter, so to get a win at Ocala made us really excited! I want to thank my dad, Jason (Birdsell), MRP, Birel, HMD Trucking, my family and everyone who helped out.”

David actually has won three races in the Sunshine State since December. He opened the 2013 WKA Man Cup Series with two feature victories at Daytona KartWeek. The Malukas team, led by head tuner Jason Birdsell and owner Henry Malukas, will now turn their attention back to WKA competition.

Following this weekend’s Easter break, Malukas will travel to South Carolina for round two of the Manufacturers Cup Series, an April 5-7 date at Carolina Motorsports Park in Kershaw, S.C.

David will run six classes at Kershaw, comprising daily programs for Cadet, Yamaha and Komet (KPV) Sportsman. After winning two races at Daytona, a strong weekend at Kershaw will have Malukas in solid contention for a potential Triple Crown Championship, the most prestigious driver award in WKA racing.

“We’re looking forward to South Carolina,” Malukas added. “I think we should run very well. There are a lot of good drivers in the WKA series and it will be tough, but if we can stay up front and get in contention to win, I think we’ll be in good shape.”

Friday, April 5 is a full day of practice at Kershaw. Malukas will run Cadet, Yamaha and Komet programs on both Saturday and Sunday, April 6-7.