Important issues from the first half of the season in Zuera 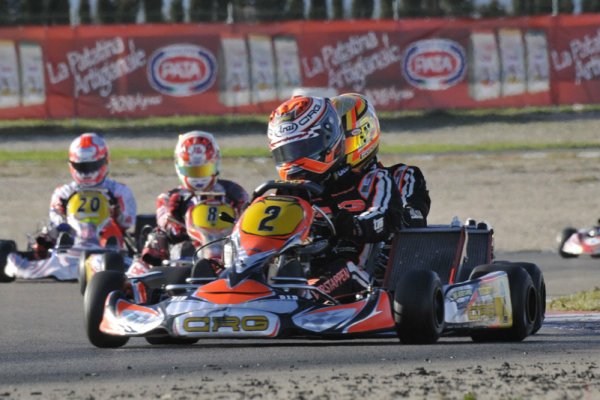 The Spanish round was particularly rich of important information which is now useful to understand the real potential of teams and drivers of this year’s WSK Euro Series. The races – which finished today – on the Circuito Internacional de Zuera in some cases confirmed the expectations of the first phase of the long, Spanish racing weekend, while in other cases these expectations were not fulfilled.

VERSTAPPEN WINS AGAIN IN KZ1
The Dutch Max Verstappen (CRG-TM-Bridgestone) was the driver to beat in KZ1 today too. The British Benjamin Hanley (ART GP-TM-Bridgestone) learnt it the hard way: at the start of Final 2 – this afternoon – he tried to gain an early lead but was closely pursued by Verstappen and, after two laps, the Dutch driver passed him. Behind them, the other British Jordon Lennox-Lamb (CRG-Parilla-Bridgestone) was outstanding; despite a bad start he pushed hard to close the gap and to recover seven positions. His terrific performance brought a further podium position to CRG: he arrived third behind Verstappen and Hanley.

ZANCHETTA DOMINATES IN KZ2
Marco Zanchetta (Maranello-TM-Bridgestone) is always in the top positions of the KZ2 standings. He won again in Final 2 today, after winning yesterday’s final 1. But it is the Italian driver himself who points out how another Italian driver, Riccardo Negro (DR-TM-Bridgestone), is a tough rival. Negro made Zanchetta’s race unpredictably hard when, at the start, took the lead. Zanchetta gained the leadership only at the end of a short but gripping duel. Third place went to the Czech Jan Midrla, who stole the podium from the French Maxime Roy (both on Birel-TM-Bridgestone). To achieve their results they both had to pass the Norwegian Emil Antonsen (DR-TM-Bridgestone) at the beginning of the race.

TIENE COMES BACK TO VICTORY-LANE IN KF
Armand Convers (Kosmic-Vortex-Vega) and Dorian Boccolacci (Energy-TM-Vega) tried to challenge the Italian Felice Tiene (CRG-Parilla-Vega), who seemed particularly competitive throughout the whole weekend. At the start of the final, the two French drivers got the lead of the race, with Convers first and Boccolacci second. However, their leadership lasted only one lap: in fact, the Italian driver passed them both almost immediately and kept the first position until the end of the race, even though he was aware that the race was no piece of cake given the great skill of the drivers behind him. In fact, the Polish Karol Basz (Tony Kart-Vortex-Vega) joined the battle and was second for a short time. Boccolacci and Convers, in this new order, closed the gap with the leader but, at the end of the race, it was Kevin Lavelli (Top Kart-TM-Vega) who snatched the third place from Basz and Convers. So, Lavelli finished third behind Tiene, the winner, and Boccolacci, whose weekend was definitely as good as Tiene’s. 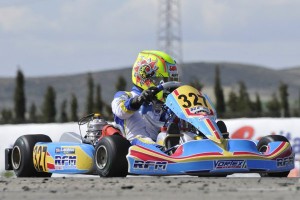 Canadian Zachary Claman-DeMelo (CRG-Bmb-Vega) was the top North American driver in the category, placing 17th. American Logan Sargeant (Tony Kart-Vortex-Vega) started 12th, but was shuffled back to the tail of the field on the opening circuit, eventually placing 23rd. Canadian Lance Stroll (Zanardi-Parilla-Vega) was involved in an opening lap wreck, and did not complete one lap.

NORRIS IS NOT AFRAID OF HIS RIVALS IN KF3
KF3 final started with the duel between the British Daniel Ticktum (FA Kart-Vortex-Vega) and the Russian Nikita Sitnikov (Tony Kart-BMB-Vega). They led the race during the first laps, while their strongest competitor, the Londonian Lando Norris (FA Kart-Vortex-Vega) was trying to close the gap from the eighth place after a difficult start from the front row. Norris confirmed to be the promising talent of the category: he recovered position after position and then attacked the two leading drivers. At half race, the mission was finally accomplished when Norris passed Ticktum and gained the lead of the race. The latter was the runner-up, while Sitnikov was third.

American Logan Sargeant (Tony Kart-Vortex-Vega) ran as high as third in the final, and went on to record a solid fifth place finish to be ninth in the championship standings. Canadians Devlin DeFrancesco (CRG-Bmb-Vega) and Parker Thompson (Energy-TM-Vega) finished inside the top-15, placing 13th and 14th respectively. The points were the first for DeFrancesco in the series, with Thompson now 14th in the title chase after earning 19 points at round one.

ON RAI SPORT 2 SPECIAL REPORT FROM THE WSK OF ZUERA
The classic after race appointment with WSK and Rai Sport 2 is on next Friday, 29th March. News from the track and from the paddock of Zuera will be dealt with during the 30′ special report from 11.55pm.