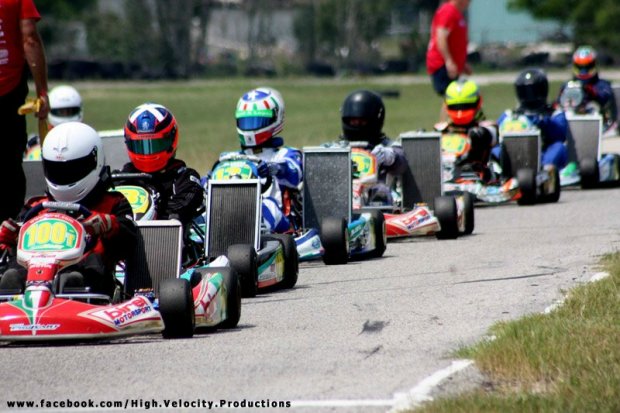 The Texas ProKart Challenge will have strong fields once again in 2013 for shifterkart, TaG, and Rotax competition
(Photo: High Velocity Productions)

The Texas ProKart Challenge, presented by 3G Kart Racing/Burger King®/Fernelius Alvarez Attorneys, provided the Lone Star state with its lone regional program in 2012, forming a relationship with Superkarts! USA and the US Rotax Max Challenge. The new series saw outstanding participation numbers and strong support from the industry that included awards totaling over $15,000. Now for 2013, the program is moving forward and expanding to a five event schedule, featuring a double race format, including tracks in Oklahoma and Louisiana.

“I’m really excited about what we are going to offer for the 2013 Texas ProKart Challenge,” commented series administrator Dave Pauly. “The expansion of our series into Oklahoma and New Orleans will not only take the series to another level, but bring in more racers into our series. We were happy to provide a number of prizes last year, including six entries to the Rotax Grand Nationals through our Burger King® Rotax Max Challenge program and the SuperNationals from our SKUSA classes where many of our racers performed well at both events. Our mission in 2013 is to provide more racing and more rewards for more value.”

The 2013 Texas ProKart Challenge is set for a return to two facilities, welcoming three additional tracks for the new season. The year will start out at the new Dallas Karting Complex, located just 45 minutes from the downtown area, for the first weekend in May. Stop number two on the first weekend of June is a return to the Gulf Coast Karters facility outside of Houston. The final weekend in June will take the series back to the North Texas Karters circuit, located north of the Dallas area. That event will feature night racing, something no other regional karting program offers.

The series will take the month of July off, ending the season with two events out of Texas. Stop four is set for the challenging Oklahoma Motorsports Complex, just south of Oklahoma City, an established circuit within the karting industry. The series finale will send drivers and teams to the new NOLAMotorsportsPark in New Orleans. This year, the facility is hosting the 2013 Rotax Grand Finals in November, in addition to the Pan American Challenge event a week after the TPKC finale weekend. It should serve as a great testing weekend for Rotax drivers that will compete for the final few tickets to the Rotax Grand Finals.

The class structure for the Texas ProKart Challenge will be similar to that offered during the 2012 season, with a mix of SKUSA Stock Moto and TaG classes, as well as Rotax Max categories under the Burger King® Rotax Max Challenge program. The shifterkart line-up will include the S1 Pro, S2 Semi-Pro, and S3 Novice categories, as well as the S4 Master and S5 Junior Stock Moto classes.  TaG classes will include Senior, Junior, Master and Cadet.  SKUSA classes will utilize the standard MG-SK White ‘SKUSA’ tire, allowing competitors to race throughout the year on the same tires they will be racing at the SKUSA Pro Tour and SuperNationals in November.  Rotax racers competing as part of the Burger King® Rotax Max Challenge program will have the choice of Micro Max, Mini Max, Junior Max, Senior Max, Masters Max, DD2 and DD2 Masters. Those classes will follow US Rotax Max Challenge class structure and compete on MOJO tires.

Superkarts! USA racers within the Texas ProKart Challenge will have the opportunity to be part of the preferred registration program for the SuperNationals this year, as well as the guaranteed starting spot for the main event on SuperSunday at the SuperNationals. Racers who take part in the full Texas ProKart Challenge will be offered the exclusive opportunity to enter the SKUSA SuperNationals event before registration opens to the public. Those drivers who earn a TPKC series championship will also earn a spot in the feature race in Las Vegas, no matter where their heat race and LCQ results place them (class must average five racers for the year in order to receive SuperSunday ticket).

“2012 was a great first season for the Texas ProKart Challenge. Dave Pauly and his staff did an excellent job promoting regional racing in the state of Texas, and their expansion this year will only help the sport grow in the area,” added Tom Kutscher of Superkarts! USA. “A number of talented drivers come from the Texas ProKart Challenge to the SKUSA Pro Tour and the SuperNationals, so if you can be successful there, you may measure up well against the rest of the country. I look forward to seeing many of them in Tucson come April and wish everyone the best of luck once the season starts in May.”

The Rotax classes will run as an official United States Rotax Max Challenge program, under the title of Burger King® Rotax Max Challenge series, allowing the racers to qualify directly for the 2013 Rotax Grand Nationals in August in North Carolina. These events will also count as ‘punches’ for the Pan-American Challenge event as well.

Returning again for 2013 will be the Texas ProKart Challenge ‘Series Loyalty Program’. In an effort to keep the costs of regional racing down, the series is offering pre-entry discounts. Racers who register for the entire series in advance will receive one free race entry free. Other incentives will be announced in the coming weeks, in addition to full registration details, as pre-entry begins April 1 for the opening event at Dallas Karting Complex.

For updates as the 2013 Texas ProKart Challenge season draws closer, be sure to visit www.texasprokartchallenge.com and ‘Like’ them at Facebook.com/texaspkc