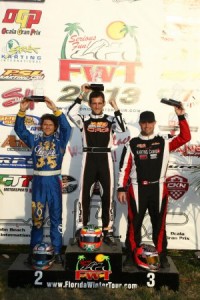 The world’s #1 CRG distributor, PSL Karting, continued to show their strength and finesse during last weekend’s Formula Kart Productions Florida Winter Tour (FWT) Rotax event. Taking to the Homestead Karting Complex, a 7/10-mile permanent parking lot facility located on the grounds of the Homestead-Miami Speedway, Team PSL Karting drivers again were able to put their championship-caliber CRG chassis on top. After posting strong results during the opening weekend of the FWT in January, the talented squad of 13 drivers continued where they left off while in sunny Homestead.

Again leading the charge for Team PSL Karting was three time Rotax Max Challenge Grand Finals (RMCGF) World Champion Cristiano Morgado. After taking both final victories in Palm Beach, the South African was able to make it four-for-four once the final checkered flag flew in Homestead. Morgado was able to complete the weekend sweep in the Rotax DD2 Masters category, despite some stiff competition. Two PSL Karting teammates gave Morgado a run for his money, and each was able to join him on the podium. During Saturday’s events, 2010 RMCGF Masters Champion Scott Campbell and Rene Martinelli were able to get past Morgado through turn one of the final. Morgado was able to make his way back to the point, with Campbell adding another podium result after finishing third. Sunday would be Martinelli’s turn at a podium finish. A fight for second allowed Morgado to cruise to a three second victory, with Martinelli earning his first FWT Palm trophy while Campbell was just behind in fourth. Morgado has a stronghold on the championship points heading into the Ocala finale, with Campbell 155 points back in second.

More success would come for Team PSL Karting in the Rotax DD2 class, as the two PSL/CRG entrants would earn visits to podium presentations. New team recruit Jesse Lazare took second place honors in only his second event with the Canadian karting powerhouse. Jamaican Collin Daley added another podium to PSL’s tally, scoring third place honors behind his teammate after clocking the off pole time in qualifying in his first event of 2013. Lazare was able to add another top-five finish after crossing the stripe fourth on Sunday and will enter the series finale fifth in the championship point standings.

In the remaining classes, Team PSL Karting drivers were able to show the strength of the PSL/CRG product, even if racing luck was not always on their side. In the ultra-competitive headline Rotax Senior class, American karting star Jesus Rios Jr. was consistently in the top-ten throughout the weekend, and posted final results of fifth on Saturday and ninth on Sunday. Shifter kart standout Fritz Leesmann made his way through the last chance qualifier on Saturday to finish just outside the top-15, and added a 15th place finish on Sunday.

“Rotax Senior is ultra competitive,” explained Dominic Labrecque, PSL Karting Team Principal. “We were able to make some improvements at the factory with the CRG which proved to be in the right direction. Rios Jr. was able to keep his machine in the front group for the entire weekend.”

Rotax Junior competitors Austin Versteeg, Pedro Cardoso and Gustavo Bandeira proved the PSL/CRG was strong, as Cardoso clocked sixth during qualifying for Saturday’s event and fourth on Sunday. Fellow Brazilian Banderia just edged out his teammate in the two qualifying sessions with fifth for Saturday and then improving further to third for Sunday. American Versteeg made it three PSL juniors in the top-ten for Sunday’s qualifying placing sixth. 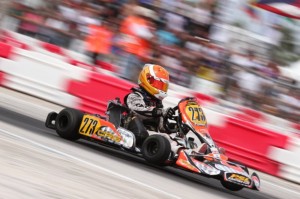 Pedro Cardoso was one of three junior drivers who are proving the PSL-CRG package to be strong and capable of winning
(Photo: PSLKarting.com)

“Versteeg, Bandeira and Cardoso were separated by only a tenth for their qualifying efforts, with the three of them almost all in the top-five,” noted Andrew Campbell, PSL Karting Team Manager. “I really believe we have a great package for the junior which is capable of winning on the D1 tire.”

Versteeg then drove to a solid eighth place result in Saturday’s final and finished 13th on Sunday. With lady luck not on the Brazilian’s sides for wheel-to-wheel action, both are certain to be back with a vengeance at the series finale. Sebastian Alvarez made strides in the Rotax Mini Max category, posting tenth in qualifying for Sunday against a field of 37. The young gun was then able to recover from a DNF in the day’s prefinal to finish 16th in the final.

“While running in P2, Cardoso would become involved with a very strange accident from the lap previous, which resulted in a destroyed kart and a disappointed driver,” added Campbell.

“On a positive note, JVD Power of Holland has made a huge improvement to our engine/carburetion program making some big HP numbers for us at the last two rounds,” Campbell concluded. “We are very pleased with their support, which will carry on to the final round.”

Team PSL Karting will conclude the 2013 Florida Winter Tour at the Ocala Gran Prix March 16-17 for the Formula Kart weekend with the Rotax finale set to crown the champions and award RMCGF invitations March 16-17. PSL Karting drivers will also be on track in Fontana March 8-10 for the Rotax Challenge of the Americas finale, with several PSL branded drivers in contention for champion titles and RMCGF berths in the West Coast series as well.