Askew stands atop the podium in Rotax Senior 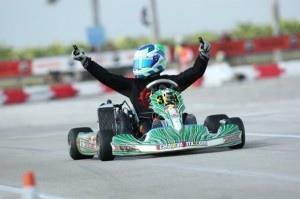 Looking to turn heads in rounds three and four of the Formula Kart Productions Florida Winter Tour (FWT), the Ocala Gran Prix (OGP) race team would head south to take their assault on the Homestead Karting Complex. Located on the grounds of the Homestead-Miami Speedway, the team would end the weekend with one victory, three podiums and eight top-five results.

“The competition at this year’s Florida Winter Tour is some of the best,” expressed OGP President Jorge Arellano. “There are race winners, series champions and world champions in attendance and the competition keeps getting stronger. I was happy with results of the second round of the series. The drivers and the tuners never gave up and they all just kept on digging for more. The team is looking forward to the final round and providing some excitement at our home facility.”

Leading the way for the team in the results category was Rotax Senior rookie Oliver Askew. After scoring a second place result on Saturday, the up and coming driver managed to top the blocks on Sunday after outdueling a field of international competitors. Multi-time champion Nick Neri would run at the pointy end of the field throughout the weekend but some tough luck would see him cross the stripe in sixth on Saturday and fifth on Sunday. Heading to the final event weekend in just under one month’s time, Neri and Askew are sitting second and third in the overall series points championship and will look to utilize home track advantage in the final rounds to garner victories and an invite to the Rotax Max Challenge Grand Finals (RMCGF).

Andretti Autosport and Go Daddy driver James Hinchcliffe saw action in the Rotax DD2 division showing steady improvement through his first two karting events in the past nine years. Coming home with a pair of top five results, the IndyCar driver will miss the final event weekend due to the opening round of the IZOD IndyCar Series.

Mathias Ramirez showed why he is a threat to podium in the end of the year championship battle as another set of solid runs in Homestead solidified his spot as one of the top drivers in the series Mini Max division. Coming home with a pair of fourth place results, Ramirez will look to challenge for the victory at a track that he has a lot of experience at in the final round of the series.

Seven Rotax Junior drivers would enter rounds three and four from the Ocala Gran Prix squad with female pilot Ashley Rogero leading the way. Scoring a podium at the opening weekend in January, Rogero added another one to her resume with a third place effort on Saturday. An incident in the first corner of Sunday’s main event sent her down the running order but the competitive female battled hard to storm back to a ninth place result. Gavin Reichelt claimed a 20th place finish on Saturday but moved back towards the front of the field on Sunday narrowly missing the podium after finishing in the fourth position.

Ryan Norberg and Kyle Kirkwood would add three more top-ten finishes for the team. Norberg had an impressive weekend showing speed to run at the front of the field and managed to claim eighth and ninth place finishes after running inside the top six on multiple occasions. Kirkwood would come home tenth on Saturday after leading several laps of the main event and then being involved in an incident that took him out of contention for the win. Sunday would see the young gun get caught up in the first lap melee causing damage to his OGP prepared Tony Kart.

Austin Garrison would claim a pair of 24th place results while rounds one and two race winner Jack Weprin would have a trying weekend scoring 26th and 30th place results. Sasha Brun-Wibaux would garner a 25th place finish in her first Florida Winter Tour event.

With very little time off, the Ocala Gran Prix race team will head to the OrlandoKartCenter for the opening round of the Florida Karting Championship Series. Competing in a wide array of classes, team drivers will see action in multiple divisions as they look to start the regional season off on the right foot before concluding the Florida Winter Tour at their home track in mid-March.

For more information on Ocala Grand Prix, OGP race team opportunities and info on how to get into karting, please visit Ocala Gran Prix online at www.OcalaGranPrix.com or contact them at 352.291.0600 or via e-mail to: Info@OcalaGranPrix.com