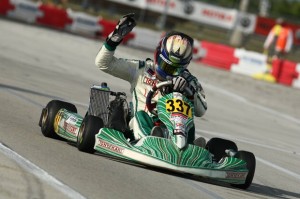 Descending on the Homestead Karting Complex, Advanced Karting was hoping to continue the momentum gained at the first event weekends of the Formula Kart Productions Florida Winter Tour (FWT). Heading to the grounds of the Homestead-Miami Speedway for rounds three and four of the Formula Kart and Rotax weekends of competition, Danny Formal would claim three victories and add another podium on the final event day while Xen De Ruwe added to the win and podium total topping the blocks on Saturday and coming home with a solid podium result on Sunday.

“Both Danny and Xen drove incredibly well against some of the highest competition levels seen at the Florida Winter Tour,” explained Donald Formal, Owner of Advanced Karting. “We will look to continue our strong runs at the final round and close the series out with more wins and hopefully championships.”

On the Formula Kart weekend, Danny Formal was the driver to beat in the TaG Senior ranks, as he was almost unbeatable throughout the race weekend. Sweeping Saturday’s action scoring the pole position, two heat race wins and main event victory, the Tony Kart pilot would look to do the same on Sunday. Narrowly missing the pole position, Formal would claim second and first place results in Sunday’s heat races on his way to standing on the top step of the podium in the day’s main event.

With only one event weekend remaining and a pair of races, Formal has a stranglehold on the overall series championship. With the title all but secure, the Advanced Karting pilot will be gunning to keep his winning streak alive.

Back to the same Homestead Karting facility the following weekend, Formal would see action in the ultra competitive Rotax Senior division. With a pair of qualifying sessions taking place on Friday afternoon that would set the grids for the weekend’s prefinal events, Formal would start his quest towards the top step of the podium on the right foot. Claiming the pole position for Saturday’s wheel-to-wheel action, the two time Team USA Rotax Max Challenge Grand Finals team member would garner the third quickest time in Sunday’s qualifying session to line up inside row two.

Though pressured throughout the event day, Formal took control of the Rotax Senior field by jumping to the lead and never looking back. Taking the prefinal victory by just over 2.5 seconds, the championship contender went on to take the day’s main event victory scoring the maximum points available. Sunday would see Formal fall back slightly claiming a fifth place result in the prefinal before crossing the stripe third in the main event.

With the points now calculated entering the final event weekend, Formal will be in a battle for the overall title and accompanying invitation to join Team USA for a third time. Leading the title chase, all fellow Rotax Senior drivers will be aiming at the target placed on Formal’s back in rounds five and six.

Advanced Karting was also the home of Rotax DD2 pilot Xen de Ruwe. Showing his true strength and rebounding from a disappointing run at the opening event weekend, De Ruwe battled hard in Homestead to claw his way back into the championship battle. Claiming the prefinal win and main event victory on Saturday, De Ruwe would also claim a podium result on Sunday and enters the final event weekend sitting second in the championship battle.

For more information on Advanced Karting and DDF Racing Engines, please contact Donald Formal at 561.718.6840 or visit them online at www.AdvancedKarting.com