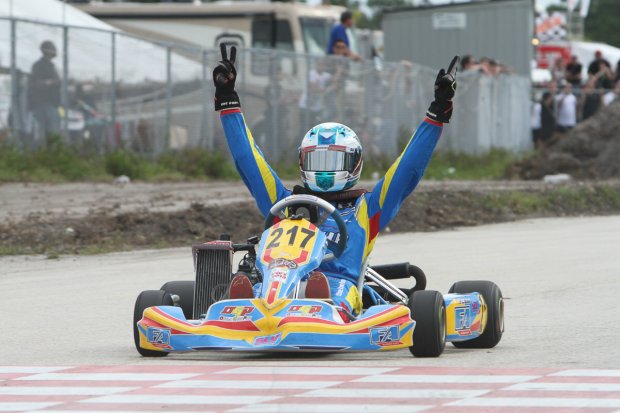 The 2013 racing season is underway in the warmer states throughout the country and in places where the snow can be removed easily, such as at the Winter Cup in Italy. Thankfully for the warmer states, snow was not an issues, although freezing temperatures and rainy conditions hampered the opening rounds of the Rotax Challenge of the Americas event in Arizona and the Florida Winter Tour in Palm Beach. One driver who conquered both dry and wet conditions at the Palm Beach International Raceway facility for the opening two rounds of the FWT was New York driver Jack Weprin, as he piloted his FA Kart to two main event victories to earn the EKN Driver of the Month honor for the month of January 2013.

Weprin’s weekend began with some highs and lows during Friday’s qualifying session for both Round One and Two. The first session on track was for the Round Two lineup, with Weprin holding the provisional pole position by roughly two tenths. A technical disqualification for clutch grease put him into the Last Chance Qualifier to begin Sunday’s round of racing. Saturday’s action was first at hand, and Weprin returned to the track later on Friday to once again qualify on the pole position with a similar time to secure the P1 grid spot for the Round One Prefinal.

Jack led the field to the green flag for the Prefinal and held the lead for a handful of laps before the skies opened up and the rain began to fall. Officials stopped the race and allowed racers the chance to change over to rain tires. The wet track did not slow Weprin down as he drove to the win, edging out fellow New Yorker Gavin Reichelt. A rough start for the 18-lap Prefinal dropped Weprin down to fifth after the opening corner. In just a matter of five laps, he was back at the front and drove away to a six-second advantage for his first FWT Final victory.

With a new trophy already on the mantel, Weprin had another challenge ahead of him – starting dead last in the 27-kart LCQ field to begin Round Two action. Jack was fast in the opening lap, gaining 10 positions in just the first circuit. By the completion of six-lap race, Weprin was into the fourth position to earn a starting spot in the Prefinal. At the start of the Prefinal, he gained 11 positions in just the opening corner avoiding trouble and entered the top-15 after just the opening circuit – starting from 32nd position. Jack continued moving forward and reached the top-five by lap six. By the end of the 16-lap race, Weprin was a solid third. The first few laps of the 18-lap Final were intense, with a number of position exchanges. Jack found himself as far back as sixth, but found his way to the front once again challenged by Rotax Grand Finals Jamaican driver Thomas Issa. The battle lasted until the final lap, with Weprin able to secure his second victory of the weekend.

Jack has competed in Europe already and is currently planning on more events in 2013. His plans for this season include trips to the Rotax Max Euro Challenge Series and the complete British National Championship SuperOne Series. Back in the USA, Weprin is scheduled to compete at the United States Rotax Grand Nationals and the SKUSA SuperNationals for the first time, while mixing in as many USRMC events as possible. 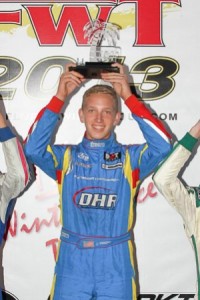 Chassis: Alonso
Engine/Engine Builder: Rotax/Ogden
Sponsors: Dotworks
Series You Compete In: Rotax Euro Challenge, British Super 1, United States Rotax Max Challenge, Florida Winter Tour
Years Karting: 1.5
How did you get started in karting? We went to a local indoor karting center where I was encouraged by the then racing director Stevan McAleer (5-time Scottish Karting Champion and current Grand-Am driver) to join the league. We won the league, got the racing bug and when we asked Stevan what was next, he sent us to Tim Hannen at Oakland Valley Race Park where Tim fueled the fire and set a very high standard to strive for.
What has been the high point in your racing career? Double win weekend at the first round of the 2013 Florida Winter Tour
What are your goals in racing? Dominate in the karting world and have a successful car racing career.
In a few words, how would you describe your driving style? Smooth, calm, and decisive.
Funniest moment at the race track? At Rotax Grand Nationals 2012, an ATV rolled onto the race track during the race. At the time, it was more scary than funny though.

What do you do when not at the track? Homework, Homework, and Homework.
What are your goals outside of karting? Get a good education, travel to new places, meet great people, and make great experiences.
What type of street car would you like to drive? Maserati GranTurismo
What are your pet peeves or things that irritate you? Cardboard. I hate cardboard.
What do you think could be done to improve the sport of karting? Less politics and competition between different series’.
What are your favorite aspects about the sport of karting? Racing wheel to wheel with another driver. The feeling of making a pass is extremely rewarding.