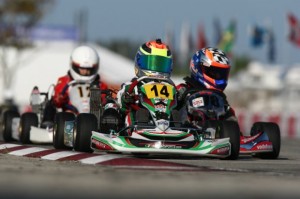 Dylan Tavella completed a successful run in Homestead with a podium finish in TaG Cadet and a victory in the Rotax Micro Max class
(Photo: DylanTavella.com)

Starting out his 2013 karting campaign with a podium at the Formula Kart Productions Florida Winter Tour (FWT) Rotax opener in January, rising karting star Dylan Tavella added his first win of the season this past weekend. Taking to the Homestead Karting Complex for back-to-back events, the GT7 Motorsports/Tony Kart pilot made a trip to podium presentations during both event weekends. Working with Bob Radivoy and new coach Charlie Swayne, the trio proved to be a potent combination in the Vortex TaG Cadet class as well as the Rotax Micro Max category.

Hitting the track for the Formula Kart portion of the 2013 FWT schedule February 16-17, Tavella would compete against of stiff field of 31 entrants in the racy Formula Vortex TaG Cadet class. Saturday’s events would see the ten-year-old post the second fastest time during the morning qualifying session. Falling back to eighth in the first heat race, Tavella then placed third in the second wheel-to-wheel action. Starting the day’s final from the front row, Tavella stuck with the leader and engaged in a racy battle for the win. Settling for second at the stripe, Tavella scored his first TaG Cadet podium finish in 2013 and would add a solid fifth place result in Sunday’s final.

Back on track for a second consecutive weekend at the Homestead facility, this time in the Rotax Micro Max division, Tavella would take in two qualifying sessions on Friday to set grids for the upcoming wheel-to-wheel action. The morning session saw Tavella miss out on the pole time for Sunday’s race by a scant 0.033 seconds. Powering back later in the day, the GT7 Motorsports/Tony Kart pilot would score the coveted pole position for Sunday’s prefinal.

Saturday’s prefinal would see Tavella run nose-to-tail in the 12-lap race and come up just shy of the victory. Falling back on the start of the day’s final, Tavella made his way to second and had his sights on the leader before a red flag ended his momentum. A single file restart put Tavella right on the bumper of the leader, and the rising talent eventually found his way around. Taking the lead by lap eight, Tavella then went on to score the feature victory by three tenths of a second and earned fast lap honors in the process.

Tavella would then go on to complete a stellar run in Homestead during Sunday’s action. Matching his qualifying position of second in the prefinal race, Tavella then fell to fourth in the final. Just missing out on another podium, Tavella again was the fastest kart on the track.

Heading into the finale round of the 2013 Florida Winter Tour, Tavella currently sits fifth overall in the TaG Cadet championship standings and third in the Rotax Micro Max points. The series will wrap up at the Ocala Gran Prix March 16-17 and March 22-24. Back with new coach Charlie Swayne, with coach Bob Radivoy now working with Dylan’s younger brother Ryan, look for Tavella to continue to be on top of his game.