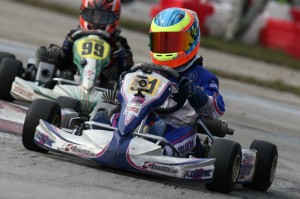 In only their second event with new karting outfit, Team Koene USA, d’Orlando Racing (DRC Inc.) pilots Michael and Nicholas d’Orlando were able to have breakout events at the Formula Kart Productions Florida Winter Tour (FWT). Taking to the Homestead Karting Complex, located on the grounds of the hallowed Homestead-Miami Speedway, for two back-to-back weekends, Michael made three trips to podium presentations while Nicholas showed a major breakthrough and was able to post some of his best results ever.

Taking to the 7/10-mile permanent sprint circuit for the first event weekend, both Michael and Nicholas would see action in the Formula Vortex TaG Cadet class. Michael showed great speed during Saturday’s morning warm-up, as the 10-year-old clocked second overall. Falling slightly to seventh in official qualifying, Michael would be near the pointy end of the field of 31 competitors for the heat racing action. Nicholas would clock a solid 18th place in the session.

The first of two heat races would come to a standstill for a red flag just before the halfway mark. Having worked up to the fifth position, Michael was unable to get his engine fired by the time the race went back to green due to a broken starter wire. After receiving assistance and now at the back of the field, Michael was able to use his speed and talent to recover with a 16th place result. Nicholas had a great showing during the first wheel-to-wheel action, placing tenth. Things went better for Michael in the second heat, as he was able to move up to fourth by the checkers, but the opposite was true for his younger brother, who posted a DNF after not making through the treacherous turn one.

With Michael lining up seventh for the day’s final and Nicholas in 20th, the eldest d’Orlando brother was able to score his first FWT podium of his career after driving forward to score a third place result. Nicholas also posted some positive results with his 12th place effort.

Back on track Sunday for yet another go in the TaG Cadet class, both drivers would start off with top-ten times during the morning warm-up. The two drivers were able to improve upon their qualifying places from Saturday, as Michael clocked P4 with Nicholas in twelfth. The two heat races would see Michael post consistent results with two third place finishes, while Nicholas continued to excel with his 11th and 19th place results. The final would see both drivers near the front of the field, as Michael was able to bag his second podium result of the weekend after finishing second with Nicholas moving up from his twelfth place starting position to cross the stripe in sixth.

“We are so proud of Michael and Nicholas’s efforts during the Formula Kart weekend,” noted Sherri d’Orlando. “Michael was able to earn his first ever Florida Winter Tour podium on Saturday and back that up with yet another podium on Sunday. Nicholas also made huge strides and his sixth place finish is quite an accomplishment for our youngest son. Both were able to have their best FWT showings ever.”

Back on track the following week for the Rotax portion of the FWT schedule, Michael would see action in the Rotax Mini Max category with Nicholas in Micro Max. Two qualifying sessions on Friday would set grids for the weekend’s wheel-to-wheel action and both posted solid times in their respective classes.

With his qualifying time putting him ninth for the start of Saturday’s prefinal, Michael was right in the thick of the class of 37 drivers. Moving up to seventh by the end of the race, Michael was able to advance his Team Koene USA prepared kart to his third straight podium result with an excellent third place run. 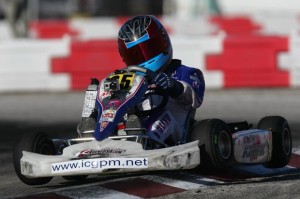 Nicholas started his Rotax event on the right foot, posting P1 during the official timed practice on Thursday. Starting twelfth against 33 racy Micro Max drivers for Saturday’s prefinal, Nicholas showed great speed and made it up to fifth at the line. After a disqualification in post race tech for improperly mounted tires, Nicholas would need to make up some ground in the final. Starting dead last, Nicholas consistently posted times in the top-ten and was able to recover with a solid 15th place finish.

Sunday would see Michael progress from his seventh place starting position to sixth in the prefinal. The final would put Michael to the test, as he went three wide through turn two and ended up getting turned around. Getting back on track near the tail of the field, Michael would be the second fastest kart on the track and finish 15th at the stripe. Nicholas continued to post strong results on Sunday, moving from his tenth place starting position to ninth in the prefinal and then bettering to eighth in the final after a tough battle.

Leading up to the final rounds of the 2013 Florida Winter Tour in March at the Ocala Gran Prix, Michael enters the TaG Cadet finale second in the overall championship points with Nicholas 14th. In Rotax racing, Michael currently sits seventh in Mini Max while Nicholas is 11th overall in Micro Max. The Formula Kart weekend wraps up March 16-17 with the final Rotax weekend set for March 22-24.

Michael and Nicholas, and DRC Inc., would like to give a special thanks to Mike Maurini and Martijn Koene of Team Koene USA, DRC’s Adam Johnson as well as Matt Long for his assistance during this past weekend.