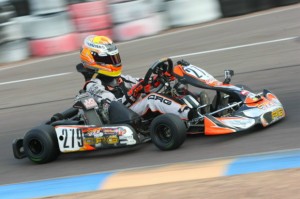 ‘March Madness’ is a term that could be used to describe the travel plans for the CRG-USA operation, with three weekends scheduled for the month. The Grand Junction, Colorado-based operation will contest dual events this coming weekend in two different states, followed by closing out one championship series and ending the month preparing for the summer season. The CRG-USA race team trailer will be trackside in Lockhart, Texas for the Lone Star Grand Prix street race as a solid group of drivers will represent the team at the California ProKart Challenge event in Rosamond, California.

CRG-USA will field eight drivers this weekend at the Lone Star Grand Prix, working alongside CRG dealer RPM Motorsports out of Austin County, Texas. Defending SKUSA Pro Tour S2 champion Sabré Cook will make her first shifterkart start this season, moving up to the S1 Pro division this year. She and RPM driver Jerry Rhodes will compete in the Stock Honda Light category. Rob Vanderen and Steve McCaffery will represent the CRG brand in the Stock Honda Heavy division. Hannah Williams and Mateo Diaz are both new to the Stock Honda Junior class, and will compete aboard their new CRG chassis. Joining them is CRG-USA driver Austin Versteeg, making his S5 debut as well. Rounding out the driver roster for the event is TaG Master pilot Michael Rhodes Jr.

Over 1,000 miles away in Rosamond, California, a group of CRG-USA drivers will be contesting the second round of the California ProKart Challenge at the Willow Springs International Raceway. CRG-USA driver Robert Marks started out the season with a victory in the S2 Semi-Pro Stock Moto division. Defending S1 Pro Stock Moto pilot Jimmy McNeil earned a runner-up finish in his opening event, and Darrell Tunnell ran to a top-five in the S4 Master Stock Moto class, both representing CRG-USA. All are gunning for more podium finishes and points toward the season championships aboard their CRG chassis.

The CRG-USA race team had a solid outing at this month’s event for the Rotax Challenge of the Americas at the PKRA facility in Glendale, Arizona. Utah driver Austin Versteeg kept himself in the title chase for Junior Max with a runner-up finish during the opening round of the weekend. He advanced from seventh in Qualifying to third in the Prefinal with fast lap honors, scoring a comfortable second in the Final. Sunday was an epic battle at the front with Versteeg getting the short end of contact in the closing laps battling for the podium, finishing fourth while recording another fast lap of the race. He enters the final two rounds of the championship trailing by 66 points, sitting in third place with a solid chance at earning the Rotax Grand Finals ticket by virtue of earning the title.

Senior Max driver Sabré Cook bounced back from a tough weekend in Tucson to show speed in Phoenix. Contact in the Prefinal on Saturday dropped her back, but she recovered to end the day 15th in the 37-kart field. Cook bettered her qualifying effort and drove inside the top-10 of the Prefinal. In the opening corners of the Final, another driver spun the back end of her CRG around and Sabré dropped back to 28th. Running her fast laps of the weekend, Cook climbed back to 17th. CRG-USA also welcomed Lindsay Brewer to the team official for the 2013 season, making her first start of the year. The Colorado driver quickly grew comfortable to her CRG chassis, and fought well against the talented Junior Max field on the weekend. She would record finishes of 17th and 18th.

The trio will travel to the Rotax Challenge of the Americas finale weekend, set for the CalSpeed Karting circuit in Fontana, California on March 8-10. The team hauler will then return back to base in Grand Junction, Colorado in to prepare for the upcoming SKUSA Pro Tour SpringNationals. CRG-USA will be traveling to the Musselman Honda Circuit in Tucson, Arizona at the end of the month for a full testing session in preparation for the April 12-14 event. Drivers interested in attending the test, in either Stock Moto or TaG categories, are encouraged to email info@CRG-USA.com today.

CRG-USA is an official K1 RaceGear and MG Tires race team, and ready to provide the best trackside service in 2013 at the Superkarts! USA Pro Tour, the Rotax Challenge of the Americas, Rocky Mountain ProKart Challenge and other selected events and series. The company is also continuing to add to its growing dealer network with new locations throughout the United States. If you are interested in becoming part of the CRG-USA network, or becoming part of this growing professional race team, please contact Stacey Cook at info@CRG-USA.com or phone 855-TEAMCRG.

About CRG-USA:
Located at the Grand Junction Motors Speedway in Colorado, CRG-USA is the newest importer for the CRG chassis brand. Operated by Stacey Cook, the company will focus their distribution and marketing on the western and central portion of the United States. In addition, the operation is fielding a national race team program through the 2013 season at all the major karting events on the year. If you want to race with the best product in karting, jump on board with CRG-USA today. Visithttp://www.crg-usa.com or phone 855-TEAMCRG (832-6274).