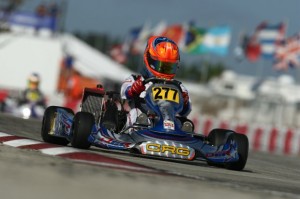 Heading to the Homestead Karting Complex on the grounds of the Homestead-Miami Speedway for rounds three and four of the Formula Kart Productions Florida Winter Tour (FWT), Devlin DeFrancesco would score another top five result in Rotax Junior. In his rookie season in the junior ranks, the up-and-coming motorsports star has claimed three top-five results in four events and will look to continue his momentum in Europe this coming weekend.

“Devlin is learning a lot in the junior class,” explained Team Manager and Driver Coach Nick Mitchell. “The competition is tighter and the drivers are smarter than the younger ranks. He is working hard and improving with each and every outing.”

Friday afternoon would see drivers compete in two separate qualifying sessions with the first one setting the grid for Sunday’s wheel-to-wheel competition while the second would do the same for Saturday. The first session would see Devlin turn a quick time good enough for the 12th place starting position while Saturday’s qualifying run, the DFR pilot would fall back deeper in the field and be forced to start 16th.

Back to the track on Saturday for some racing action, DeFrancesco would be the victim of a first corner incident that sent him spiraling down the running order. Battling hard with some bent equipment, the CRG pilot moved forward to cross the line in 27th. Looking to improve greatly in the main event, Devlin took the bull by the horns and drove to the front of the field. Advancing to the third position on the white flag lap, Devlin would be involved in a fierce battle that would eventually see him cross the line in the fourth position.

Gunning for a podium on Sunday, the prefinal would be all but a carbon copy for the multi-time champion as first corner incident would sent him to the back of the field. Unable to keep going, Devlin would start Sunday’s main event from the 34th position.

With the goal to finish and advance forward as far as possible, DeFrancesco once again proved why he is a threat at each and every race weekend. Driving hard and setting some fast race laps, the DFR standout drove to an impressive 15th place result.

Mitchell continued, “We need to work on Devlin and his starts. With the junior drivers much more aggressive than the Mini Max field, we need to better put ourselves in the right position. Qualifying better will be a start and this is something that we are working on. This is only our second event in the Rotax Junior division and we as a team are learning at each and every outing.”

On the Monday following the FWT, Devlin and his DFR crew jet set their way to Italy for some European action. Running in the highly competitive KFJ division, Devlin is set to make his junior European debut this weekend at the WSK Euro Series opener.